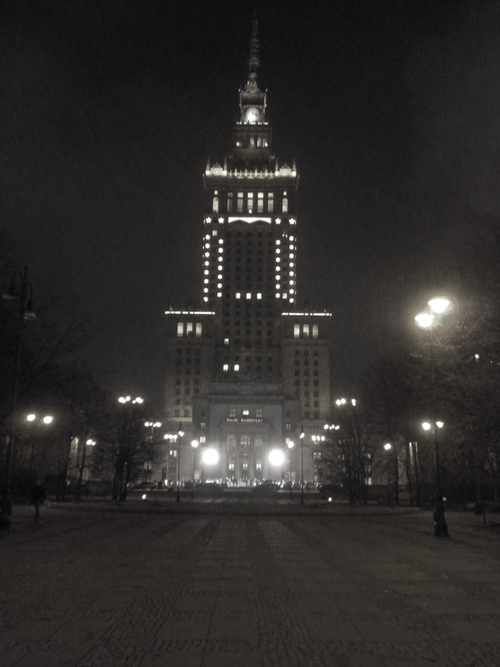 I had a feeling this might happen; I’ve fallen in love with Warszawa (vahr–shah-vah, sounds so much nicer, doesn’t it?). Warsaw is the capital of Poland, yet for some reason it seems to get much less attention than fairytale-esque Krakow in the south. It may not be as beautiful as Krakow, but hidden on top floors, down back alleyways, in decrepit courtyards, and behind glass skyscrapers, you will find some of the richest and hippest culture in the country. Here are five of my favorite discoveries from my recent visit:

The Palace of Culture and Science was built in the 1950s and is a cousin to Moscow’s infamous “seven daughters of Stalin” skyscrapers. While some may find it cold and depressing, I think it is absolutely gorgeous, especially at night when the lights turn on. Also nicknamed “Stalin’s wedding cake”, the Palace of Culture is a symbol of Warsaw and is difficult to miss if you are passing through the center of the city.

What was supposed to be a temporary art installation on the busy traffic island at Aleje Jerozolimskie and Nowy Swiat is now a permanent fixture of Warsaw. It seems like a fun addition, but actually the message behind it is much more serious. Designed by the artist Joanna Rajkowska and titled “Greetings from the Jerusalem Avenue”, it is meant to remind passers-by of the void left by the absence of the Jewish community from Warsaw.

This is one of the newest Old Towns you will ever see. Generally I am opposed to reconstruction efforts that make a place look much older than they actually are, but Warsaw has been the exception. Having been completely destroyed during World War II, this city has been through a lot and the effort they made to bring it back to its original glory is nothing less than admirable.

Milk bars are not unique to Warsaw, they can be found throughout Poland; however, I found some of the best and most authentic ones here. Remnants from communist times, bar mleczny are essentially super-cheap dining spots. These days they are extremely popular among students, pensioners, bums, struggling artists, hipsters and tourists. No frills and no English in these establishments, but in return you can eat a hearty two-course Polish meal for around $3 and feel for a few minutes what it might have been like to dine in the Soviet Union.

Of course I am going to be intrigued by a place that locals tell me I have to see yet shouldn’t do it alone. Praga is a notorious working class “hood” that has enjoyed a bit of a revival lately. Many old houses in the area have been refurbished and turned into a maze of bars, art houses and design studios. Conversely, if you walk 5 minutes across Aleje Solidarności you can see the most run-down parts of the city that have escaped war demolition, post-war reconstruction and recent gentrification. Strangely, I felt like I had seen this place before. And I had. These streets were used as a set for Roman Polanski’s film The Pianist.