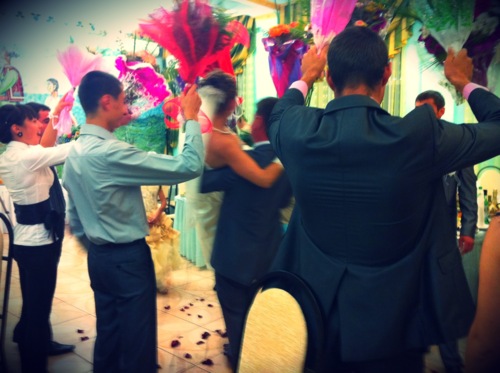 So I’m trying an experiment this week. Going to attempt to post photos, videos, etc direct from the road on my latest adventure to Moldova and Romania. First reason for this is to keep mom and dad updated; I’ve been really bad at that lately. Sorry. Second reason is in order not to forget or put off until tomorrow what I can do today. With all the functions I’ve added to my iPhone lately, I really have no excuses. Seriously, I could probably give birth through this thing if I just found the right app. So with that said, I’d like to present the first video that I have ever produced, directed, and starred in. This is what it’s like to party at a Moldavian wedding.

This wedding took place in a small town called Căuşeni which is about an hour an a half from Chișinău. My friend Lena from Kiev insisted a couple months ago that me and my friend Julia just had to be her guests and see what a typical Moldavian wedding was like. The vast majority of guests on the groom’s side were from Ukraine and on the bride’s side there were loooots of Moldavian village folk. So good. I filled up my 2GB memory card because there were just too many photo and video opps of Moldavians getting down and dirty. I will definitely be uploading a comprehensive photo album and probably even a second blog post about my time in Căuşeni because there’s just too much that happened, I know I’m going to leave something out.

Like in other countries (and I’m totally talking about for many people in the U.S.), wedding receptions are investments in Moldova too. You put in a lot in hopes of getting an even greater return. Here this factor was more obvious to me judging by the look on the bride and groom’s face the whole night, especially when it came for the speeches which actually was more like a cash giving “ceremony”. I didn’t include any video footage of that but basically they started moving to all the tables with the mic and gave out glasses of wine to everyone who made a speech. Just about all of the speeches consisted of a obligatory congratulations followed by “And now I/we present to you X amount of dollars/euros”, followed by some little ditty on the fiddle. Kind of tacky in my opinion and especially awkward for guests they don’t know very well if at all, but that’s how they do it here. Of course my lovely friend Julia jumped at the chance to get up and speak in front of an audience for a free glass of wine and was so kind to volunteer me next. Can’t describe in words what it felt like to give a on-the-spot bullshit speech in English to a room of 150 Moldavians and Ukrainians. In retrospect I guess I could have attempted some shoddy Russian one but I was thinking maybe it would seem more exotic for their guests and detract attention from the fact that I wasn’t slipping any cash into the money chest if I did it in a foreign language (for the record, Julia and I did buy them some bed sheets at the recommendation of Lena, but realized they probably weren’t as cool as dollar bills).

Despite the materialistic aspects, I have to say I did feel a lot of soul at this wedding party. You could tell people were really giving with all their heart what they could. Everyone was so kind to me regardless of the language barrier and were so concerned about whether or not I was having a good time. For them it was most important that I had a good impression of Moldova and it’s people. And suffice to say, I absolutely do.