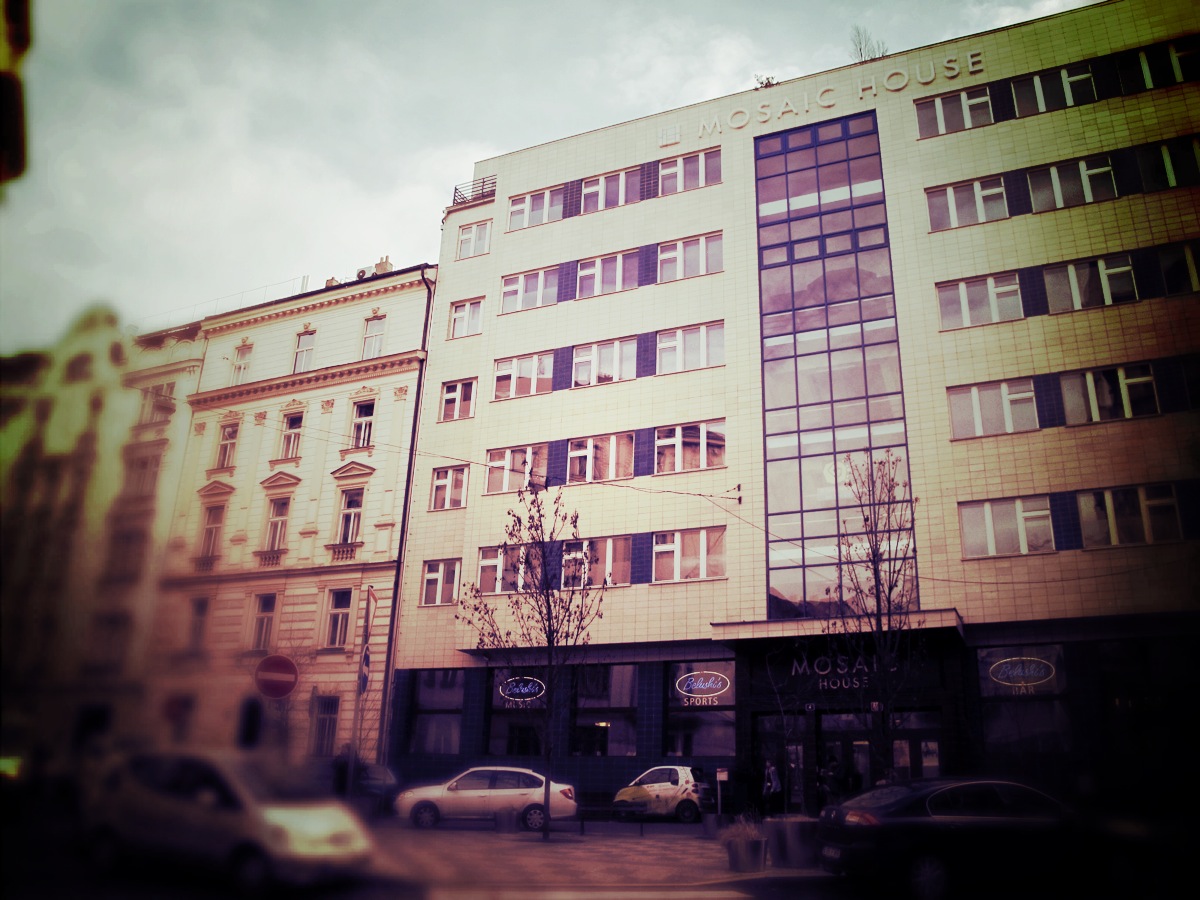 First of all, let me just start off by saying I almost resorted to Couchsurfing for Prague because I simply could not find any hotels that I deemed “cool enough” there on the Internet prior to my arrival in Central Europe. Thank goodness I decided to do a bit more searching two nights before I went, while still in Bratislava, because it was then that I came across what is surely the coolest hotel/hostel chain in Prague. Possibly even Europe/the world. Let me explain…

It was the Mosaic House Hotel website that first caught my eye.

“Welcome to one of the most environmentally-friendly hotels in the world.” Alright, that seems pretty cool.

You mean to tell me this place is not only an environmentally-friendly 4-star hotel in the center of Prague, but also a hostel? Too awesome to be true, I had to see it to believe it.

I was still thinking it was all too good to be true once I walked into the hotel (or hostel?) lobby. The place was just oozing with hipness and sex appeal.

Still didn’t believe that hostel rooms were hiding in there somewhere, but I was going to have to wait to find out. I was graciously booked into a double room on the sixth floor which is where I headed first.

And let’s talk a little more about the bathroom because it’s here where a lot of the eco-friendly magic occurs.

Basically, the ‘grey’ water from the sink and “rain dance” shower is sent down to the water recycling unit on the ground floor and purified into ‘green’ water. The ‘green water is then recycled back into the low-flow toilets while simultaneously recuperating heat which is then used to warm the shower water. It’s brilliant and makes one wonder why more hotels can’t invest in such technologies that in the long run save money AND the environment.

In addition to recycling their water, Mosaic House Hotel also uses 100% biogas, 100% renewable-source electricity (the first hotel in the Czech Republic), and has huge solar panels installed on the roof.

The absolute best thing about my room though? THE PATIO.

It took me a solid 15 minutes to calm down after I realized I had such an incredible view of Prague just outside my door. Seriously. The hotel is located in what’s considered the New Town, so about a 10 minute walk from the Old Town Square, which was the perfect in my opinion. I like staying at places that are close to everything but not in everything, if you know what I mean.

Turns out there are indeed dorm rooms in Mosaic House Hotel. Dorm rooms that put my old apartments in New York and London to shame. What is awesome about the fittings is that they are all custom designed and made in the Czech Republic. No nasty, generic wooden bunks whilst keeping it “local”. I love.

Not that you can tell from the photo above but there’s a lot of eco-friendliness going on in there, too. Those shades back there automatically open and close to conserve energy and the room temperature and lighting is controlled by the amount of people in the room thanks to motion sensor technology.

The best thing about the shared rooms has to be that they all have their own sparkly, clean ensuite bathrooms. Clean bathrooms make or break a place for me, but Mosaic House Hotel has taken it to a whole other level.

I mean, COME ON…this for a ‘hostel’ shower?

On my second day there I had the distinct pleasure of meeting with the Bohemian Hostels marketing manager, David Baker, who also happens to be one of the partners of Mosaic House Hotel. We were supposed to meet for just a quick introduction and tour, but ended up chatting over coffee for a couple of hours in the hotel bar. He gave me a full rundown on the history of Bohemian Hostels: from its modest beginnings back in 1999 when the owner, Mathias Schwender, could barely fill his first 10-bed hostel (that was Sir Toby’s which now has over 100 beds!), to when they opened Prague’s first boutique budget property called Miss Sophie’s in 2004, then a designer hostel called Czech Inn in 2006, and finally the eco-friendly Mosaic House Hotel in 2010. We also talked quite a bit about social media, blogging, iPhoneography, life…

After saying goodbye to him is when it dawned on me what sets Mosaic House Hotel and Bohemian Hostels apart from all the rest. I could feel it prior to even meeting David, but after he left my suspicions were confirmed: these people truly care about their guests. And they cared about them long before they even knew they were going to exist. These guys are not passionate about owning hotels, they are passionate about hospitality and I sincerely mean it when I say their properties embody this mentality 100%.

After having an incredibly delicious smoked salmon omelette at Belushi’s (pictured above), I was ready to move on and try out the next spot, Miss Sophie’s. This was the second place they opened back in 2004 and was Prague’s first boutique budget hotel/hostel.

Much more demure and intimate than Mosaic House, Miss Sophie’s also boasts apartments, private rooms AND dorms. The vibe in here is more of a sweet and mellow one, perfect for couples or travelers looking for a calmer, and dare I say romantic, place to stay.

The rooms here were also fantastic and with the same amenities as Mosaic House. I loved how minimal the design was yet how comfortable it still felt.

And again, a spotless and sparkly bathroom! Aaaah, I could have just slept in that bathroom…

Breakfast at Miss Sophie’s is famous, literally out of this world. You have to book a time to eat beforehand because it’s a real intimate affair. You and several others are treated to a beautiful spread of cheeses, meats, breads, cereals…and your own personal chef that is ready and willing to make you whatever you want.

This all takes place downstairs in their stylish, brick basement lounge.

Unfortunately I had just two nights in Prague, and therefore not enough time to “Czech out” their other two hostels, the original Sir Toby’s and Czech Inn. I was kind of sad to saying goodbye to Mosaic House and Miss Sophie’s, but at the same time I’m so very happy that I was introduced and get to share them with you now.

From here on out you probably won’t be seeing too many hotel or hostel reviews like this on The Blonde Gypsy because it’s simply not what this site is about; however, when you do, you can be certain that they are going to be about really special spots. Spots that were not only hand-picked by me, but spots that left a lasting impression and in some instances have even defined my trip.