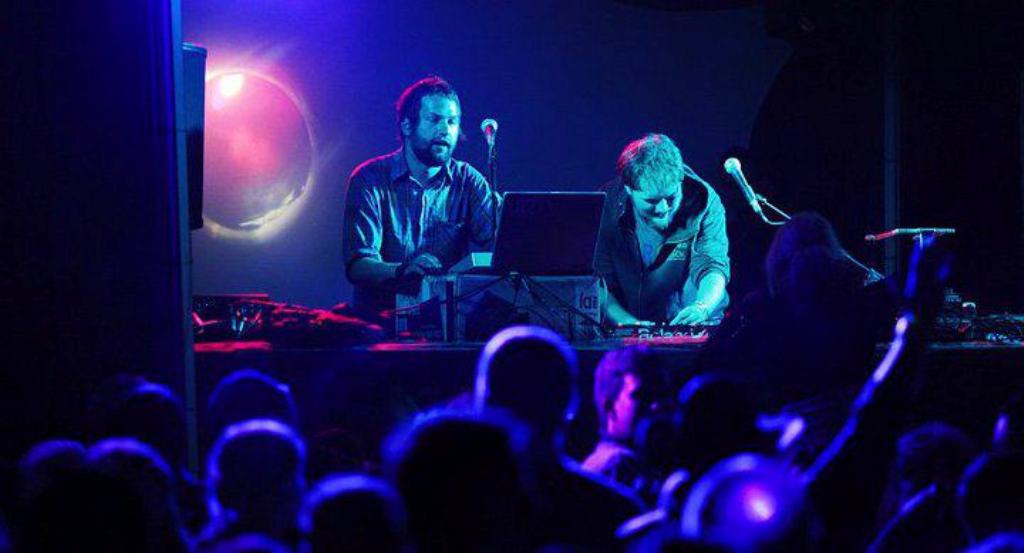 One of my favorite things about traveling is having exposure to new music. Of course the internet does wonders for spreading the stuff, but there is nothing more special in my opinion than being introduced to a cool new band while in their country of origin. This is how the story began between me and Golden Parazyth.

Back in 2010 I spent a couple days in Lithuania and was lucky in that the girls I was staying with had incredible taste in music. A couple of our evenings were spent just chilling in their apartment and drinking vodka while they showed me all their favorite bands and songs on LastFM and YouTube. My absolute favorite turned out to be this one, Regatta of Happiness.

It was definitely love at first sound/sight and I haven’t stopped following Golden Parazyth and K@ ever since. I would describe their music as soothing electro bursts of ecstasy in your ears, but other sources call them “darkly atmospheric beat-driven electro, adorned with traces of 8-bit music, IDM, broken beats and ambient”. That’s pretty accurate as well. It’s also true that Giedrius Širka’s voice has the ability to melt hearts and probably cure some chronic illnesses.

Not only are they incredibly talented musicians, but also super cool dudes who were kind enough to agree to answer a few questions for the Blonde Gypsy. Check out their interview below in which I pick their brains on their background, music, and all things Lithuania.

Tell me a little bit about Golden Parazyth – the history and evolution.

Giedrius & Aurimas: Started in 2006 as one-man-band, then in 2009 K@ (real name Aurimas) joined in, and now we are duo. So, Golden Parazyth (real name Giedrius) is a lead vocalist and software operator, while K@ stays on keyboards and back vocals. We both are not just colleagues, but also like brother, sister, mother and father to each other.

What genre would you classify yourselves as?

Giedrius & Aurimas: It’s a mix of indie, electronic, synth-pop music; in Lithuania they call us naive-electronica band. But sometimes we sound more radical and our “light” genre scale goes out of bounds.

How would you describe the music scene in Lithuania?

Giedrius: There’s no need to talk about pop-music scene in Lithuania because it’s the same business like in every world, maybe just with some post-Soviet differences, but the alternative stage is growing up fast. We have a considerable number of bands and musicians we can be proud of, and those musicians could achieve a lot out of Lithuania’s boundaries.

Has the music scene in Lithuania changed a lot since you first started? If yes, how?

Aurimas: A new generation is coming up with independent Lithuania’s attitude and it has two sides: one is that young artists are more open-minded in some aspects and the other side is that those young people have a consumerist perception that leads them to create an imitative kind of music.

You’ve collaborated with Andy Lau, another big name from Lithuania, and it was amazing. If you could work with any artist(s) outside of Lithuania, who would it be?

Giedrius: I have had to heat up Gus Gus and Underworld when they were at Lithuania, so it would be great to gain experience from those kind of bands, and many more who have similar feel of music.

One thing that really interests me is that a most of your songs are in English. Have you always been writing in English? If no, when and why did you start? Is it very challenging?

Giedrius: Somehow for me it’s easier to send a message in English despite of irregular language (we call it fish-language ;)), but also there are some songs with Lithuanian texts.

Have you played many shows outside of Lithuania and where has been your favorite place to play?

Giedrius & Aurimas: Not many, but we played at London, Amiens (France), Dublin, Riga, Warsaw, Bialystok (Poland).

Aurimas: It is always a big pleasure to play at open-airs, when the sun shines bright, everybody is smiling and all of us are in mother nature’s haven.

Do you have any upcoming tours/shows planned?

Giedrius: In the near future we are going to Dublin again, and in May we’ll have a tour in Lithuania with our new album “Long Way Home”.

I read you recently moved from Kaunas to Vilnius. What would you say is the difference between the two cities?

Giedrius: Kaunas will be always in my heart as a quiet port. There is junction of two rivers in the city, and I have always heard gulls, like I was living near the sea. I left some of my best friends in Kaunas and have a big pleasure to come back to this city every time. Vilnius is more versatile city and now it’s exactly what I need, because of my own internal changes as a person.

For someone who has never been to Lithuania, can you give some good reasons to visit? Or recommend any cool places to check out?

Giedrius & Aurimas: There are many interesting museums to visit in Lithuania, like National Art Museum of M.K.Ciurlionis in Kaunas. We have an incredibly beautiful nature in our land, you must check out Kursiu Nerija National Park and it’s absolutely not the only place to go. Of course we couldn’t forget to mention the jolly night life in Vilnius ;)

Where are your favorite places to party in Lithuania? (Either in Kaunas, Vilnius, or any other city)

Aurimas: It’s hard to pick one or two favorites, in Vilnius you just go to Old Town streets and often you could find a new place to party or just have a chill-out. Clubs, pubs and other similar places are changing all the time.

Can we party the next time I am in Lithuania?

Make sure you become a fan of the guys on Facebook and check out their latest release Dark Side off of Long Way Home.