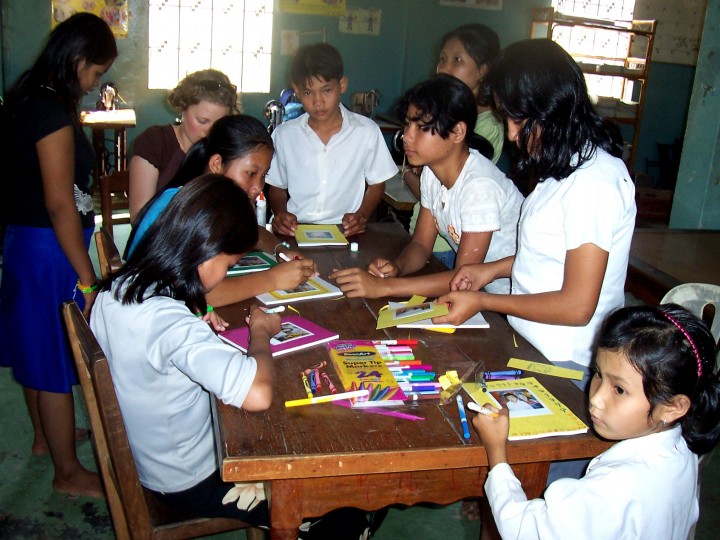 Today I am reminiscing about my first and only trip to Southeast Asia. Cambodia, to be exact.

Oddly enough, Cambodia had never been a thought in my travel-obsessed mind until the opportunity to go there for school credit came my way in 2005. I was 21 and it was in the early days of my career as a “gypsy”. Up until then I had mostly been interested in traveling to Europe, but when I learned about this Art & Social Action in Cambodia course my school was offering, I thought it would be an excellent chance to learn more about this part of the world and diversify my travel portfolio.

Upon telling my parents that I wanted to do this, my mom was like “WHAT. No way” and my dad… well, he wasn’t explicitly against it, but all of a sudden literature on landmines and Pol Pot started appearing on my desk out of nowhere. A couple of weeks went by when my prospects really weren’t looking so good then finally I was able to convince them that it was actually a great idea for me to go. Not only was it a once in a lifetime opportunity, but it was for a good cause, the Khmer Rouge was out of power, and hey, I really needed the school credit. So I went.

There were twenty-six other students from my school who also went and I knew none of them. Most of them were from the Art Education department and ended up clinging to each other (I was the International Studies outsider). That’s why I’d actually consider this my first experience in “solo” traveling because I mostly did my own thing when we weren’t in class.

Cambodia turned out to be one of the kindest countries I have ever visited. You give a dude $1 to take you somewhere on his motorbike and he will sit and wait – sometimes for hours – then drive you back. Not just kind, but honest. That was my impression, but then again I didn’t wander off too far from familiar territory or go out partying late at night by my lonesome. For the three weeks I was there I mostly stayed in Phnom Penh because we had class and community service Monday-Friday, but halfway through we all went to Siem Reap for a couple of days to check out Angkor Wat. Photos of that are here.

Traveling to Southeast Asia for the first time was rad, seeing Angkor Wat was amazing, but actually the thing that left the biggest impression on me from that trip was hanging out with these girls below (and one boy). This is part of the Cambodian Center for the Protection of Children’s Rights (CCPCR) – a rehabilitation shelter for children rescued from child labor and sex trafficking – and where I spent most of my time.

For the duration of the course, we teamed up with Cambodian students from Pannasastra University (PUC) and developed art projects that we could work on with the kids at CCPCR – our largest one being a huge mural that we painted in their bedroom. Why all the art? I didn’t really understand at first but then it became quite apparent why it was such an integral part of the program. At the heart of it was the belief that art can be used as a medium for empowering. Not only is it empowering; it is extremely therapeutic. It can also transcend culture and social inequality which made the language barrier less of an issue.  The art projects served as a perfectly non-confrontational way for them to vent their frustrations and even helped build confidence.

As warm and gentle as I found Cambodia, the dark side is that it is plagued with poverty-induced child labor, nasty sex trafficking and an extremely large population of orphaned children whose parents have died from AIDS. It is the poorest country in Southeast Asia and still recovering from a brutal civil war so not surprising that so many families and children are easily lured in by the promise of money. Most of these girls were not kidnapped or forced into a life of slavery by the criminals running it; they were actually sold into it by their parents or made the decision themselves because they thought it was the only way they could survive.

It wouldn’t be enough for me to tell you this was a life changing experience. It is one thing to learn about a place or a problem from afar, but so much more affecting when you are there hearing about it and dealing with it first hand. Volunteer/study abroad programs are such a great way to get yourself out there in the world, especially to places you might not otherwise visit. This trip made a huge impact on me for a lot of different reasons, but from a traveler’s perspective, I’d say it is what made me realize that traveling is the best form of education I could have and the main reason I will never stop.