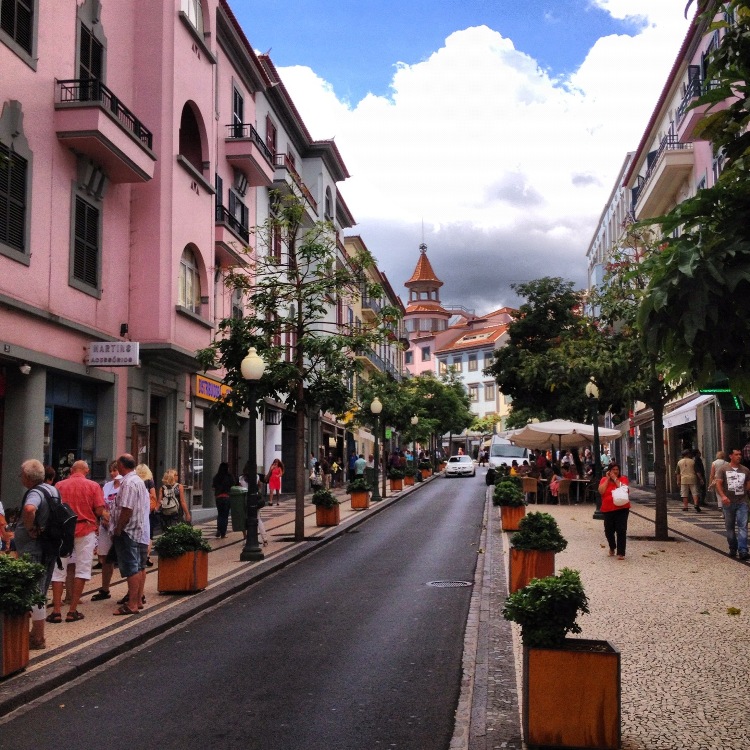 The first three days I was in Madeira were spent “stuck” in Santa Cruz, the island’s third largest town. If you think that sounds bad, think again.

When I arrived to the island, I was admittedly burnt out and severely behind on work so really I could have stayed in this position the entire time. But sitting around in one spot for too long is not what we gypsies like to do. No, we like to roam and explore so decided on my fourth day there to make a trip over to the island’s capital, Funchal.

Funchal is pretty easy to get to from Santa Cruz, even without a car. There are express buses (some even with wifi!) that cost 2.60 one-way and will have you to the city center in 25-35 minutes.

The moment I got into town I was impressed – it seems to have it all for being so small. A nice marina, lots of restaurants, good shopping, beautiful architecture. While I could have easily hung around there for several days, here’s what I ended up doing in just one.

I happened to arrive during the middle of the island’s week-long Nature Festival. With nature and sustainability in mind, my introduction to Funchal came by way of an hour long Segway tour provided by By Nature.

This was my first time riding a Segway and let me tell you, those things are the dopeness. Concerned I might not live to tell the tale, I actually dominated that vehicle by the end. Had my guide Jaime given me any more alone time with the thing, I might have attempted some wicked jumps/spins and filmed it for you all to watch.

After an above average amount of mental concentration, my appetite was indeed worked up so I consulted Jaime on where I could grab a good lunch. He led me down to the Old Town, to a taverna called NoitEscura, where I was able to have a real Madeiran meal – lapas (limpets), bolo do caco and of course, a stiff poncha.

A stroll around the Old Town

After lunch, Jaime and I parted ways and I hit the Old Town. I had only about an hour which was more than enough time to get acquainted as it’s pretty small. It’s also over 500 years old – can you imagine all the things these buildings have seen?

Back in 2010 they started a really cool art project there called Art of Open Doors, or Arte Portas Abertas, that was meant to put a bit of life back into the neighborhood by having artists paint some of the deteriorating/abandoned doors. A majority of them can be found along Rua de Santa Maria, the main vein running through the Old Town. I think it was a success as it really gives the place a lot of color and personality.

The highlight of the day was my ascent up to Monte via cable car. The views are incredible and Monte is a pleasant area to wander around for about an hour. There’s a cute church at the top where randomly Charles I, the last Emperor of the Austro-Hungarian Empire, is buried.

I ended up taking the cable car back down but if you’ve got about 30 euros to spare you can get one of the dudes photoed below to give you ride on a wicker toboggan. This is how they (including Ernest Hemingway) used to do it back in the day.

Tour and wine tasting at Blandy’s

My last stop was at the Old Blandy Wine Lodge for some education in Madeira wine. Madeira wine is by far the island’s most popular export with around 1 million liters of the stuff exported every year.

The 45 minute tour takes you through the lodge (it’s in a building that was once part of an old monastery) where they store some of the wine for aging. They give lots of info on the history of Blandy’s, what makes Madeira wine different from the others, how it’s made, etc.

I particularly enjoyed learning how they used to bring the wine down from the hills a couple hundred years ago – by filling these goat skins sachets that hold up to 40 liters and then carrying them down on their back. Crazy.

Of course my favorite part came at the end, the actual tasting. If you aren’t familiar with Madeira wine, it’s a dessert wine and therefore very sweet. A bit too sweet for my taste actually – I like my wines dry as the desert and pink like a panther – but I enjoyed a couple glasses nevertheless.

Perfect way to end an awesome day in Funchal.

Big thanks to Madeira Tourism for helping throw this great itinerary together for me at the very last minute.