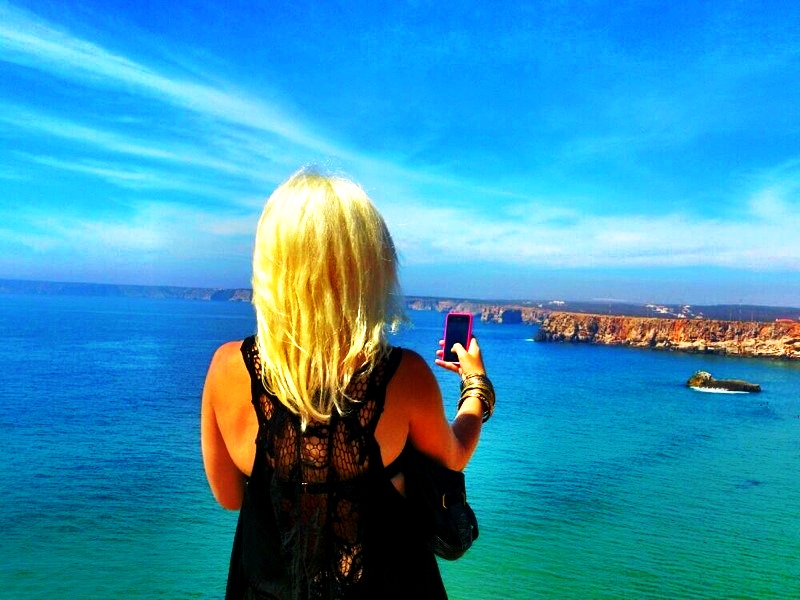 This day I’m about to tell you about was one of those legendary travel days, one that was unplanned, and one that most certainly could have never been predicted.

I woke up bright and early on a sunny Sunday morning in Portimão and had a day trip to Sagres and Lagos on my mind. I had been thinking about renting a car to get out to both the day before, but in the end I decided it against it since the bus situation didn’t seem too complicated and much, much cheaper. Little did I know this decision would also lead to seeing both places in a completely different (and brighter) light.

On Sundays there are no direct buses from Portimão to Sagres, you have to make a change in Lagos. I’m not sure if it’s the same on other days of the week, but you are more than welcome to try and figure it out for yourself (<—the website hurts my eyes).

Since Sagres is further from Portimão and buses less frequent, I decided it would be best for me to go there first and then hit Lagos on my way back. Sounded like a brilliant plan and apparently a popular one as these two guys from Nepal I struck up a conversation with at the bus stop were doing the exact same thing. They were as confused as I was about which bus we were supposed to get on (it was confusing) and why it was nearly 15 minutes late leaving (oh, that Algarve time), so we immediately had something in common.

From Portimão it only took about 20 minutes to get to Lagos and once there we had about 20 minutes for a quick stroll around until the bus to Sagres left. I say “we” because by this point it had pretty much been established that these dudes and I were in this day trip together. None of us had any idea what we were doing and they seemed like a good time so I thought, hey, why not? If I am going to get lost in the Algarve, better to have some company than be alone.

A sweaty 50 minute bus ride later we  finally make it to Sagres and are like “WTF” – the place seemed totally deserted. It was a ghost town compared to Lagos and Portimão. Luckily we spotted a bar pretty close to where the bus dropped us off so we headed there to grab a beer and hopefully find out where we could find some points of interest. As usual, the bartender spoke great English and told us we needed to go see the fort (Fortaleza de Sagres) and the End of the World (Cabo de São Vicente).

The fort is walking distance from the city center so we headed there after a quick peak at the beach immediately down from the bus stop. It’s been said that here is where Henry the Navigator established the first ever sailing school five centuries ago, though not much evidence to prove this exists. I believe it though.

We tried to get inside but there was an entrance fee that none of us felt like paying (it didn’t look that exciting), so we moved on. Seriously, just walking around out here will blow your mind. The sheer size of these cliffs is impossible to capture in a photo but I can assure you, they are magnificent. Sagres is also a hotspot for surfing – the best in the Algarve apparently.

From the fort to the End of the World it’s like a 45 minute walk unless you have a car, bike, or a strategic plan to ride one of the two buses that goes to and from there most days. We didn’t have time to walk nor any of  the other things mentioned above so we just called a taxi. Think it was about 8-10 euros split between the three of us to have him take us and wait 20-30 minutes while we checked it out. Totally worth every single euro cent.

The End of the World is basically just a cooler name for Cape St. Vincent, the most southwestern point in Portugal – literally the end of continental Europe. There’s a lighthouse there, one of the most important on the continent according to me, and a it’s a cool place to hang for about half an hour or so. Amazing, amazing views and if you’re lucky you will spot one of the many insane fisherman trying to catch god knows what from the edge of the earth. Surely there must be more convenient places to cast a line??

When we were finished there our taxi man threw an offer at us we couldn’t refuse. He was headed to Faro to pick someone up at the airport and offered to drop us off in Lagos for just a couple euros more than it would have cost to take the bus. Major score as none of us were interested in waiting 15 minutes for the next bus and a taxi ride would be much more comfortable as I’ve been in saunas cooler than what we rode in on the way over.

This is when the story starts to get a bit more interesting. You see, before I went to the Algarve I really didn’t know much at all about any of the towns except for one: Lagos.

I had heard from numerous credible sources that it is like a beach paradise where the streets have no name (because you are too wasted to take notice) and one night out can turn into 5 before you know it. Basically the ultimate party spot and a place one should stay away from if they want to be the least bit productive which is why I ended up staying in Portimão. It ended up being a good decision this time around but next time…next time I’m leaving the work behind and will be staying here. RIGHT HERE.

Unfortunately none of us were prepared to spend time on the beach so instead we grabbed a late lunch and set out on a mission to do the only thing that was mandatory for me to do while I was there. Pay a visit to The Jam.

The Jam is not only one of the dirtiest and diviest bars in town, but it’s also where you could frequently find my good friend Rob during his extended stay in Lagos back in 2010. When I told him I was going that morning he insisted I “go sit in front of Kurt Cobain and have a beer for him”. Not because he’s an egomaniac (for the most part), but because that day happened to be the three year anniversary of his wildly popular blog called Stop Having a Boring Life. What are the odds and considering my blog is in some sort of deep and committed relationship with his blog these days, I felt it was the least I could have done, right? So we went.

And guess what – it was closed! So sad but we came up with a comparable Plan B which was pick up some beers and a bottle of Vinho Verde to enjoy down by the beach instead. The last bus back to Portimão wasn’t for another couple of hours so we thought we’d get some mild party time in since that’s what you do when in Lagos.

And before we knew it we had missed the last bus back. Whoops! We were having way too much fun and going big though so why go home? Plus, the later we stayed the more likely The Jam would be open by the time we went back, which it was.

It was also more likely that the bartenders would have their shirts off upon our arrival, which they did?

This is where I’m going to end this story because, well, it’s not entirely clear what happened after these last two photos were taken except that we had one hell of a good time and ended up getting back pretty late via taxi. I think it cost around 25 euros (divided by 3) but totally worth it since we can now all say we’ve had a good night out in the party capital of the Algarve.

I never imagined waking up that morning that I’d have such a wild day trip to Sagres and Lagos; in fact I was convinced it would be a super quiet one since I’d be going alone and had no intention of partying. So thankful that I ran into Deb and Sunil on the way or else I probably would have missed out on a few things in Sagres and not have had even 5%  of the amount of fun that I did in Lagos. More importantly, I wouldn’t have made two new friends which is something that never ceases to amaze me about this whole traveling around solo business.

Making Peace with Barcelona at One of Europe's Best Hostels