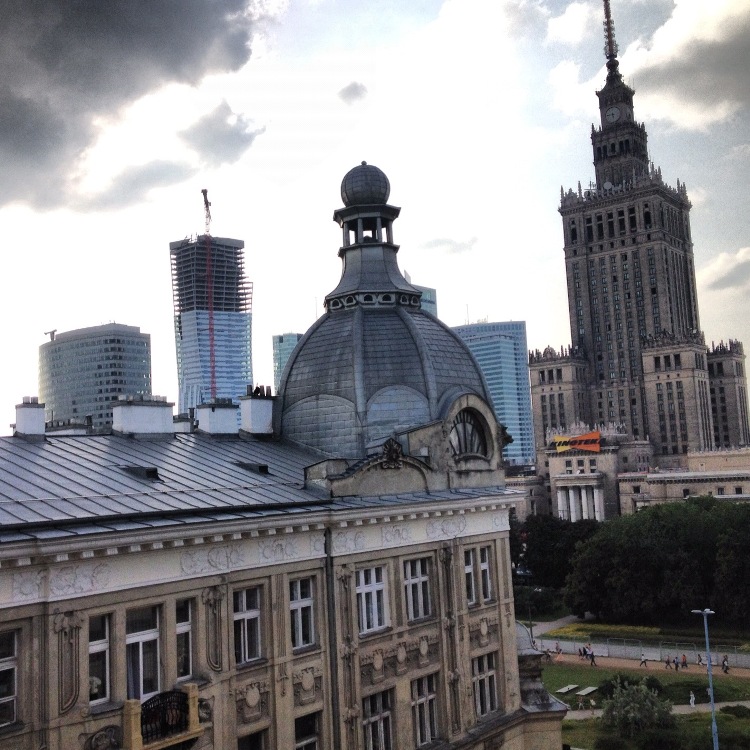 Warsaw is a city that I’ve been raving about for years.

This past June during Euro 2012 was my fourth visit there and in my opinion it just keeps getting better and better every time I go. As I’ve said before, Poland has a lot of lovely cities, but there’s something about Warsaw that makes it my favorite. I used to defend its grey concreteness with the fact that it was full of interesting people and way more forward-thinking than the rest of the country, but the truth is that is actually has a lot to offer aesthetically-speaking if you just walk away from Centrum or go when the weather is warm and skies blue.

With that said, I’ve got some new things to add to the list I compiled back in the day of five of my favorite things in Warsaw and I think some of them will really surprise you.

I was shocked to learn this time around that Warsaw is the greenest capital in Europe – as in has the most greenery, not most environmentally friendly. That title belongs to Copenhagen.

I’m not saying it is the absolute truth, this was just what an overzealous tour guide told me, but upon further inspection I will say that he could be right if you are counting trees. Apparently 25% of Warsaw is covered in trees, you just have to get away from the very center a bit. Thankfully I decided to do this one day and ended up lost in the middle of a freaking forest. WHO KNEW?

Well most Varsovians, for one. Łazienki Park, Warsaw’s largest park, is probably the most popular place to get your nature on in the city. On a nice day you can find all kinds of people strolling around this place doing all kinds of things as trees are not the only things you can find in here. There are also a couple of palaces, a Roman theater, an Egyptian temple, two orangeries, ponds you can take a boat ride on, peacocks you can play with.

I am not really a hipster but should you be, you’ll probably be happy to learn that there is a place for you to hang in Warsaw. In and around Plac Zbawiciela there are all kinds of “hip” coffee spots, restaurants, bars, etc – my favorite being Charlotte where you can sit out front and stare at the city’s new permanent rainbow over a sexy cappuccino.

This rainbow, conceptualized by artist Julita Wójcik, has been up since June 2012 and was specially imported from Brussels where it stood during the Polish presidency of the EU Council in 2011. A bit random, almost as random as the one in Kiev, but definitely brightens this corner of the city up.

As much as I want to say milk bars have become totally trendy, they really haven’t. More and more people might know about them and eat at them, but that still hasn’t changed the character of these old-school dining establishments. I say “dining establishments” because to call them restaurants would be a stretch. More like Communist-era canteens.

Sadly one of my old favorites on Nowy Świat closed, undoubtedly to make way for another Starbucks or something of that nature, but I’ve got a new favorite to recommend.  Ząbkowski Milk Bar in Praga, just at the corner of Targowa and Ząbkowska. It’s big, it’s clean, and it’s got ah-mazing chłodnik.

Every time I have been in Warsaw I have either just been passing through or staying with people I know so on my latest trip I thought it would be a good idea to branch out a little. My goal was to find a cool place to stay that I’d be able to recommend to those who aren’t blessed with awesome Varsovian friends and did I ever.

After a bit of research I found the Polonia Palace Hotel, the only hotel in Warsaw to have survived the destruction of World War II and therefore the oldest hotel in the city. Diplomats, ambassadors and even U.S. presidents have all been guests here so if you are looking for a place with history (which I was), this is the spot. It’s also directly across from one of my old loves, the Palace of Culture and Science aka one of Stalin’s “wedding cakes”.

Perhaps one of the best things I discovered about this hotel is that it is actually cheaper to stay on the weekends. Who would have thought? This also reaffirms my belief that if you are to splurge on luxury accommodation anywhere in Europe, your best bet is to do it somewhere in Central or Eastern Europe. We’re talking 4-star hotel from 55-65 euros on a Friday or Saturday night depending on the season for a standard double room. A LUX standard double room.

Yes, THE BEACH. Bet that’s the last thing you expected to hear about in Warsaw but there are in fact quite a few sandy spots along the Vistula where you can find people urban bronzing, hanging out in speedos, and drinking cold beverages when it is warm outside. Swimming, not so much.

Yeah this spot just under Śląsko-Dąbrowski Bridge near Praga Park is no Ipanema Beach, but drink enough 5 złoty piwos and it very well could be. It even has beach clubs where you can dance until the wee hours during the summer. Then again so does Berlin so not even sure where I am going with this anymore…

I doubt the sand in Berlin gets this hot though.

Have you ever been to Warsaw? Feel free to add your favorite things in the comment section below. Big thanks to the Polonia Palace Hotel for hosting me on my last night in the city. While I was a guest, all opinions stated here are indeed my own.