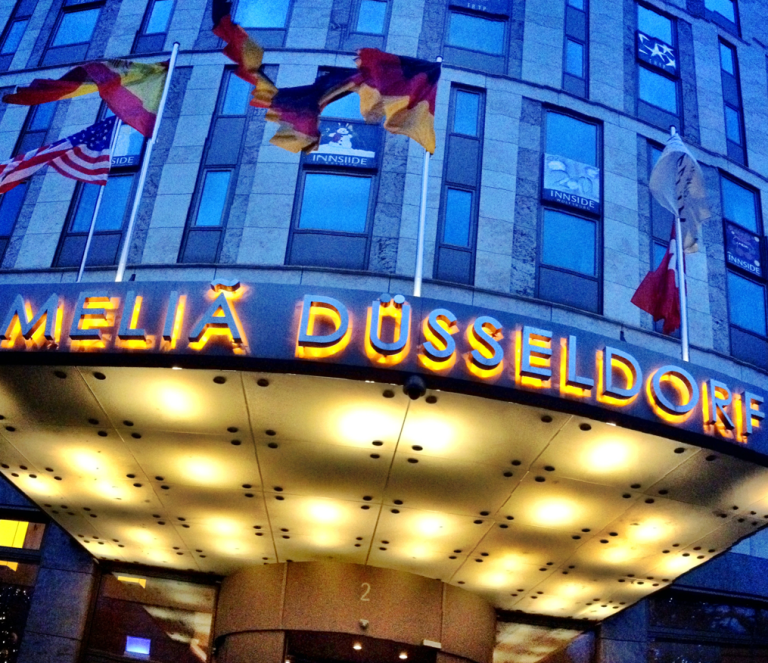 When I found out that I would be flying through Düsseldorf to go home for Christmas I was not overly excited. That is until I found out there was a Meliá hotel there. A very special one.

If you haven’t heard of Meliá, it’s a sexy Spanish hotel chain that I was fortunate enough to get acquainted with while I was on a press trip through Northern Portugal. It was one of the classiest joints I had ever stayed in and so of course when I found they had 22 hotels in Germany, 5 of which where in Düsseldorf, I knew it was a sign from god (the travel one) that I had to check it out.

So what was it that drew all of my attention to Meliá Düsseldorf? With four other very sexy properties in the city, you’d think I would have been happy at any of them, but that was not the case. I wanted Meliá Düsseldorf or nothing because I found out it was the first hotel in Germany to have been certified as a “Biosphere Hotel”.

According to the site of Biosphere Responsible Tourism (Instituto de Turismo Responsible), a biosphere hotel is “an accommodation centre integrated into its environment, promoting social and economic development of the local community. They minimize their environmental impacts and actively collaborate in the local development, offering the client a different product, based on the maximization of the tourism experience through the integration of the visitor in the environmental, cultural and social setting.” Sounds cool, but what exactly does that mean?

I’m familiar with how hotels can minimize their environmental impact, but I was super curious to find out how it’s possible for a hotel in the center of über-urban Düsseldorf to get recognized for promoting culture along with social and economic development. When I asked Melanie Bartsch, Marketing Manager at the Meliá Düsseldorf, to fill me in, she explained that the main goal is to make their business clients aware of the hotel’s surroundings. The hotel sits opposite of Hofgarten, Germany’s oldest public park, so a lot of effort has been made to integrate elements of it with the art concept and interior of the hotel. Lots of earth tones, beautiful photos of the park everywhere you look, conference rooms named after various parts of the park, and they even planted a tree right across the street.

In terms of promoting economic development, they offer local dishes in their restaurant and cooperate with regional suppliers as a way to strengthen the community. Bless those regional suppliers for the role they played in one of the highlights of my stay: the breakfast buffet.

Socially and culturally, Meliá Düsseldorf makes it a point to try and integrate their guests not only with each other, but also with the community. They offer guided sport groups for running or Nordic walking and will occasionally invite the neighborhood to come mingle at events.

You may have already guessed – it is not a budget hotel. Last I checked, rates ranged anywhere from €98 to €410 per night, but were surprisingly cheaper on some weekends than during the week. It is a four-star superior with four-star superior prices, but rest assured, you get what you pay for if you’ve got the money to spend.

The Premium Room I was given I can only describe as “happy sexy”. Elegant, earthy, and stylish with the perfect amount of bold accents to liven the 27 sq meter space up.

My favorite thing about the room though? Had to be the tub. Turned out to be the most comfortable and luxurious spot for apping out blonde gypsies and the city of Düsseldorf with my iPhone.

As much as I could have stayed in that room for 48 hours straight with my awesome tub, flat screen TV, and magnificent view of the city, I decided to take a walk. Lots of them.

From the crazy modern neighborhood of Medienhafen to the kilometer long shopping street of Königsallee;  down the lovely Rheinuferpromenade and of course to all of the “off the chain” Christmas markets that were scattered around…I walked everywhere. Only time I had to use public transportation was when going to the airport (which by the way is very close and well-connected to the center). Clearly the location of Meliá Düsseldorf is just one more great thing it has going for it.

Düsseldorf is actually a pretty cool city to hang out in for a couple of nights. It may not have a ton in the way of touristic sights, but sometimes that can be a relief. Frees your mind a bit and lets you focus on other equally appealing things like the simple pleasure of taking an aimless walk or spending quality time in a four-star superior hotel room.

Big thanks to Meliá Düsseldorf for hosting me while I was in Germany’s 7th largest city. While I was a guest of the hotel, all opinions stated here are indeed my own.

Remembering All That's Great About The Sunshine State

Paris Isn't For Lovers, Paris Is For Friends