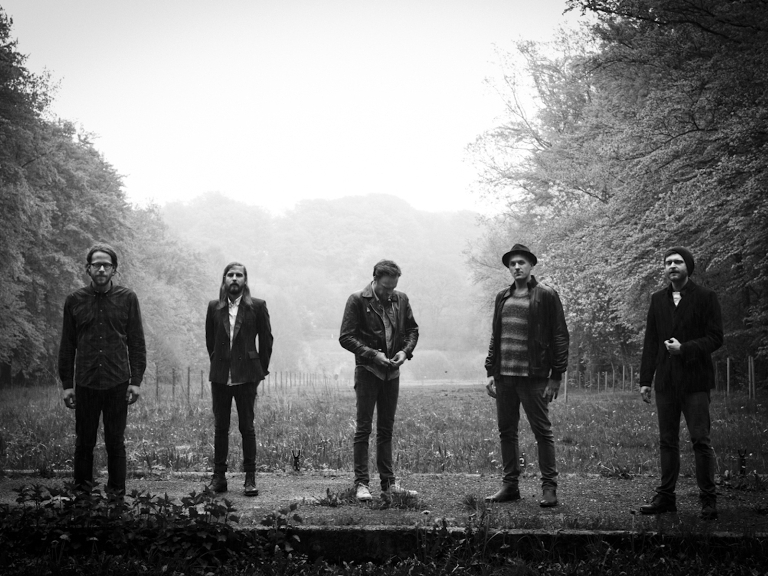 Sweden is a powerhouse when it comes to giving the world amazing music so it was only a matter of time before an interview with a Swedish band surfaced on The Blonde Gypsy.

Comprised of five fantastic gentlemen (Tobias Hellkvist, Ola Pålsson, Lars Kjelldén, Kristoffer Rudberg and Niklas Larsson), this band knows how to deliver some powerful tunes that will surely get stuck in your head and make you think about life. Rock mixed with some folk mixed with some pop mixed and squared by Swedish ingenuity, these guys just keep surprising me every time I hear something new from them.

Very excited to be featuring them here and incredibly honored I was able to have a few words with them before the BBC… (see Question 5) Big thanks to the two founding members of the band, Tobias Hellkvist and Ola Pålsson, for taking the time to answer all of my music + Malmö related questions and keep it coming, boys!

What kind of band is Pixie Carnation and what exactly does the name mean?

We’re a five piece rock band based in Malmö. There’s no fancy story behind the name other than it was quite hard to come up with and agree on one… So when Pixie Carnation came up, we basically just had a vote. It’s a sort of small carnation and we just thought the name had a nice ring to it.

Can you give a little bit of history on the band? When did it form, how has it evolved…

Pixie Carnation as a band has been forming slowly over the course of many years. When we started working on the songs back in 2007, it was just the two of us and our vision of starting a band, but as we didn’t want to spend months of jamming and trying to form songs in the rehearsal room, we decided to finish a bunch of songs before actually forming the band. We didn’t have loads of friends who were playing music, or knew anyone else suitable for that matter, which made forming the actual band quite a long procedure… We had some different members coming and going and it took a long time to get to where we actually considered ourselves having a proper core of members to play with. The good thing about it though, was that we had the songs all good to go – which made it a bit easier for us trying out new members, finding what we were looking for.

You started recording your debut album already back in 2010. Can you fill us in a little on the recording process, and what caused such a delay? I’ve also read something about Kalle Gustafsson from The Soundtrack Of Our Lives being involved somehow -was he and in what way?

Well, we entered the studio and recorded and produced the album ourselves here in Malmö in 2010. After that, we wanted to go some place else to mix, so we came in contact with Kalle and ended up going to his studio in Gothenburg to mix it together with him, which went very well. After that, a series of events happened and without going into details, it resulted in the album not being released as planned. Nothing happened for over a year and as time went by, we felt that we wanted to redo some takes and try to enhance some things in the recordings. So, in the beginning of 2012, we ended up in a studio in London, making a new mix of the entire album together with Iestyn, a pot smoking British guy flown in from New York :) So in the end – there never were any involvement from Kalle, apart from him mixing a first version of the album which we never used.

You recently released your first music video for the song “Keep it Coming” that was directed by Dan Anders Carrigan and stars the Swedish actor Jonas Malmsjö. It really turned out to be quite the cinematic masterpiece and you’ve been receiving a lot of positive attention for it. Any plans to make another?

We actually have two more videos coming up, which we recorded before this one, basically without a budget… So yeah, there will be more coming, but not as cinematic :) We’re just lucky that Dan Anders wanted to do this video with us, and that it turned out so well!

I noticed an upcoming show in London this April. Will you be doing anything else while you are there? Any other shows/tours for 2013 in the works?

We will do a radio session at BBC two days before the show. But other than that we have nothing else booked at the moment. Hopefully we will play more this summer!

The music industry is tough in general, no doubt, but do you feel some sort of pressure to differentiate yourself not just as another band, but another Swedish indie band? If so, how do you do it?

We don’t feel any pressure coming from anyone other than ourselves. We would rather say that the music business is the one trying to make you blend in, make you behave like the everyday band so to speak. So yeah, you would probably prefer to be seen as something different, but it’s hard when you make music that’s kind of timeless and simple… You just have to be thorough and picky and try to find your thing, whatever it might be, both musically and visually, and then just go for that.

You are essentially a “Malmö band” as it’s where you were formed and where 4 out of 5 of you currently live. How has being from Sweden’s third city influenced your music if at all?

That’s very hard to say… Probably not that much. Malmö is a very good town for live music, with quite a few good venues to play at, so many artists and bands pass through here while on tour. With all that going on around you, that probably inspires you to some extent, but not musically, more in a creative way. Like you want to get something going yourself. But since we’re not connected to any other bands here, or part of a “Malmö scene” as some people like to put it, we’re probably more influenced by our time growing up together outside the city.

Eurovision is coming to Malmötown. What do you have to say about that? Are lots of people talking about it yet?

Don’t have much to say about that… Except that we’re not interested. And that we find it hard to understand that this whole circus seems to grow bigger every year…

It is undoubtedly going to place a lot of attention on the city and hopefully people are going to realize that it is just as cool (some might even argue more cool) than Stockholm or Gothenburg. In your opinion, what makes Malmö different from every other Swedish city?

Don’t know… People always say that Malmö is great because you can ride your bike everywhere… It’s that small, but still a big city. Here there are lots of green parks, and it’s close to nice beaches and small forests in the countryside, and to Copenhagen of course… Don’t know if you knew this, but Malmö was just nominated the third greenest city in the world right after Reykjavik and San Francisco!

Say you had a friend coming to town who has never been to Malmö before. Where would you take them and what would you do to give them a proper “Malmö experience”?

The thing is, you find yourself in that situation a lot of times, and it’s always hard to figure out what to show or where to go… We would probably prefer to go somewhere in the close countryside instead of wandering around the city centre. But if we were to take someone out for lunch, we’d go to Raw Food House on Friisgatan. Excellent and delicious!

I have been fortunate enough to have partied with all of you in Malmö since your bassist, Lars Kjelldén, happens to be my DJ partner in crime. Aside from perhaps KB or Debaser, where we usually play, where would you take a friend visiting for a good night out?

Don’t know… We’re not much of a partying animal crowd, but we do think it’s nice with all the beer gardens popping up around summertime… :)

Make sure you “like” Pixie Carnation on Facebook to keep up to date with all their latest releases and happenings. You can also pre-order their forthcoming album, The New World Record, on iTunes now and catch them live on April 22 at XOYO if you happen to be in London!