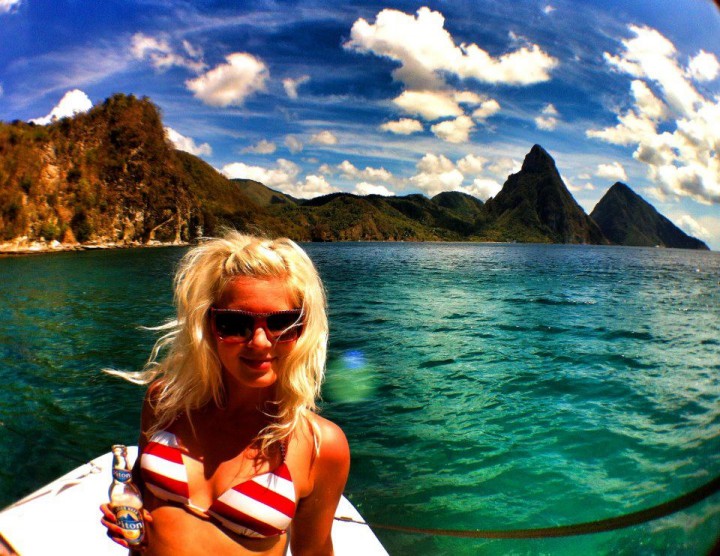 Originally published on Stop Having a Boring Life

I know you’re used to seeing mostly Euro content around these Solo Female parts and Rob has written enough about the Caribbean to fill an entire novel/book of poetry, but I thought I’d join the party and share with you a bit of the recent vacation I took to paradise.

What you are looking at here is me in the Caribbean Sea, St. Lucia to be exact, after a four year hiatus. Even though my time in Madeira, Portugal may have felt a bit like a Caribbean getaway, the last time I was actually in this part of the world was a trip I took to Jamaica back in Spring 2009. I’m calling it a “vacation” because for the first time in a while I wasn’t working with any tourism boards or sponsors so I literally had not one thing to worry about except for what bikini to wear and which sea-faring hustler would be bringing me my next Coco Loco.

Aside from being able to just sit back and drink potent tropical beverages all day long on the beach, this vacation also gave me a chance to reconnect with some of the most important people in my life who I can’t believe I kept myself away from for so long due to my selfish obsession with travel. The longer I stay closer to family and old friends, the more what really matters in life starts to come into focus. This is of course not rocket science and something you hear people talking about all the time, but for some it’s incomprehensible until it’s experienced first hand and at the right time.

Enough about feelings and perceptions though…let’s talk about St. Lucia, shall we?

Seeing as I am a Master of Europe and not the Antilles, I really had no idea where I was headed or what I was in for the entire ride down. All I knew was that it was going to be good considering every time I looked out the airplane window, I’d catch a glance of something like this:

What I ended up really liking about St. Lucia though was that it turned out to be nothing like a majority of the islands I was flying over on my way down from Miami. Word on the beach is that most of the white sand you find on the island is actually imported from other places like Belize. The rest (and majority) of it is golden or even silver near the more volcanic parts.

It’s super mountainous and lush as you may have already noticed which makes it an ideal place for waterfall hikes or zip-lining if that is your jam. Turns out it is also an ideal place for shooting movies and TV shows. The original Dr. Doolittle was filmed around where I stayed in Marigot Bay and some season finale of The Bachelor which I’m fortunate enough to have missed.

During the seven days we spent there we did our fair share of touristy stuff (Drive-in volcano tour, sulphur bath, rum factory visit, and a hike up to the top of Pigeon Island), but for the most part we just kicked it on boats and on beaches without an agenda nor concept of time. To me, that is the difference between a vacation and traveling. It doesn’t matter where you go or when as much as why and with whom.

I travel to explore and I vacation to take a break from reality. That’s why I’ve decided that the Caribbean will be one of my favorite vacation spots from here on out. I could never imagine myself living there for an extended period of time nor hopping from island to island trying to submerge myself into the cultures of each, but I can and will envision myself laying around on its beautiful beaches without a care in the world and a Sweet Lala in my hand every time I feel I need a break.

Have you discovered any differences between traveling and vacationing or am I just crazy? I’d love to know.