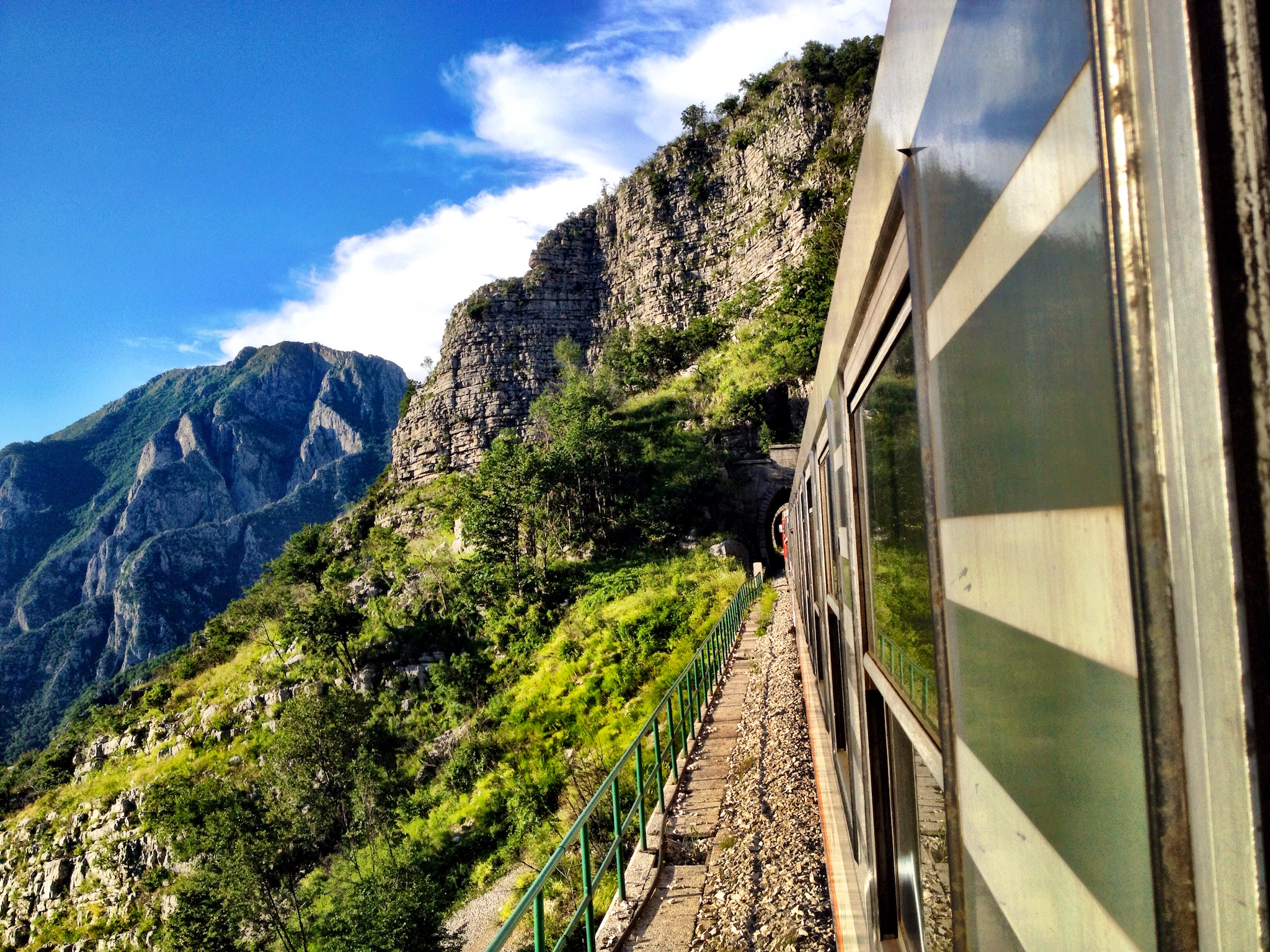 The train ride between Bar, Montenegro and Belgrade, Serbia is famous. It’s known to be one of the best routes in Europe and arguably the most scenic east of Switzerland. From the moment it was completed in 1976 until now, it’s been considered a modern marvel of engineering with its 254 tunnels, 435 bridges, and one of the highest railway viaducts in the world, Mala Rijeka. A true legend, it’s the kind of journey that’s probably made it onto thousands, maybe even millions of people’s bucket lists and a travel opportunity that for many only comes once in a lifetime.

I, on the other hand, could have cared less about all of that this past June. The thought of it actually made me cringe and gave me anxiety. I was trying every single thing in my last minute, budget power to avoid getting on that train and at no other point in my life had I wished teleportation to exist more.

Let’s start with the current schedule situation. At the time of press, there is only one journey a day north due to damage from recent floods and it takes 17 hours. 17 HOURS. That’s 6 hours longer than it took this time last year, 10 hours longer than it took 38 years ago when it first opened, and about the same amount of time it would have taken me to fly, land, and already be drinking a sugar-free peppermint iced mocha in California. Where is the justice in that?

Moving on from the unjustifiable to jaded, the other issue and main reason for the internal protest of this train ride was that I had unfortunately hit the point where I was hating travel. The traveling part of travel, that is, which can happen to even the best gypsy/nomad/wanderer from time to time. After a fast and heavy two months on the road and with one more to go, I didn’t care about the experience, I just cared about getting back to Belgrade as quickly as possible after my “seven days away” turned into almost seventeen.

And lastly, there was this:

Sweet memories from when I partied my way in the opposite direction VIP style aboard Tito’s Blue Train with Yomadic last year. Like having Korbel or Cooks champagne forced upon you when all you know is Dom Perignon…being stuck in a run-down tin box all by my lonesome and possibly without electricity, food, or water for an absurd amount of time when all I knew was this? It was going to be painful.

It was also going to be necessary since I was trying to make these travel arrangements the day before and I had a flight to catch from Belgrade the evening after. I literally had no other choice unless I wanted to spend a couple hundred euros on a plane ticket, so on my way I went. Slow train to Belgrade is what was meant to be…

My first impression upon entering the train was that maybe it wouldn’t be as bad as I had imagined. I immediately noticed a 220 volt power outlet when I entered my sleeper car so all of my devices could stay fully charged, not to mention that I had the whole thing to myself. The beds were clean, pillows of decent fluff, and plenty of space on the top rack for my bags.

After the wheels started rolling, I made myself right at home on the bottom bunk, pulled out my laptop, and started to organize some photos because seriously – WTF else was I going to do with all of this time? Maybe write a book or produce a short film while I was at it. Fifteen minutes down, 1005 more to go, until all of a sudden it hit me.

I am on one of the most beautiful train rides in the world.

Seriously, what was my problem? The sun was shining outside, I had an entire room to myself, and there was absolutely nothing to be complaining about nor anything else more important to be doing than enjoying every minute of it.

And so I did, for like 4 hours straight, until it got too dark to see anything. Snapping photos like a mofo, rocking out to my jams like nobody was watching (FYI nobody was watching), thinking lofty thoughts while staring out the open window. The only thing missing was a nice, chilled bottle of rosé, but I made a mental note of that for next time.

About an hour and 15 minutes in the scenery started getting really good. At that point we were well away from all the main roads and cutting our way through the magnificent mountains of Montenegro towards Serbia full-speed ahead. Tunnel after tunnel, bridge after bridge. I didn’t count but apparently 1/3 of the Montenegro segment of the trip is through a tunnel or on a viaduct, and it’s only when heading north that you can catch a glimpse of the highest, Mala Rijeka.

Approximately three hours and 15 minutes after we left Bar, we rolled into Bijelo Polje which is the final stop in Montenegro and where we had our first passport check. We sat there for about 30 minutes which in retrospect would have been the best time for me to jump out and grab something to eat or drink since I didn’t bring anything with me, but I refrained. Food and water didn’t seem as important as making sure I didn’t get left behind in a border town.

After another 20 minutes passing through No Man’s Land, we arrived at the Serbian border. Nothing was going on there, it was already dark by then, and I had realized that the 220 volt power outlet was just a decoration, so I decided to put away a few of my dead electronic devices and crawl into bed. From the Serbian border onwards I pretty much zoned out/slept for the rest of the time minus the few minutes I spent totally confused at the text message I received welcoming me to Bosnia & Herzegovina. Fantastic. Was I on the wrong train?!

Before I got too worked up and out of bed to check with the train man, I suddenly remembered from the last time that Bosnia actually does make a little cameo on the journey for about 10 kilometers, so nothing to be alarmed by. Also, since it’s such a short distance, no passport checks.

Waking up to the fields then suburbs of Serbia the next morning was certainly less sensational than the dramatic landscapes of Montenegro, but beautiful nevertheless. And damn exciting once I spotted the Ada Bridge. FINALLY. Back in the White City. Even though a small part of me was a bit sad my little solo train party was about to be over…

After 17 hours in a not-so-run-down tin box all my by lonesome without food, electricity AND water, I was still alive. Probably more alive than I had been the day before and back in Belgrade somewhat in disbelief that I almost let myself miss out one of the best train rides I have ever taken just because was I was suffering another minor case of travel burnout and feeling like a diva.

In the end, I was forced to drink Korbel instead of Dom Perignon, and it didn’t matter. In fact, I loved it. Champagne is champagne –  you can have just as much fun, if not more fun, drinking a bottle that you found for $4.99 than drinking the expensive stuff. Sure it would have been nice to live it up in the lap of luxury like last time, but at the end of the day, witnessing one of the best train rides in Europe in a more confined space without any amenities and all alone turned out to be just as awesome.

Seventeen hours was a bit too long, I’m not going to lie, but it is what it is/was what it was and it’s times like these you just gotta stop dwelling on the negatives and focus on the positives of the situation, because seriously, when you do, life will be beautiful. Travel, even the most exhausting and tedious parts of it, will seem beautiful. And no doubt, even the tiredest gypsy of them all will find themselves in love with it all over again.