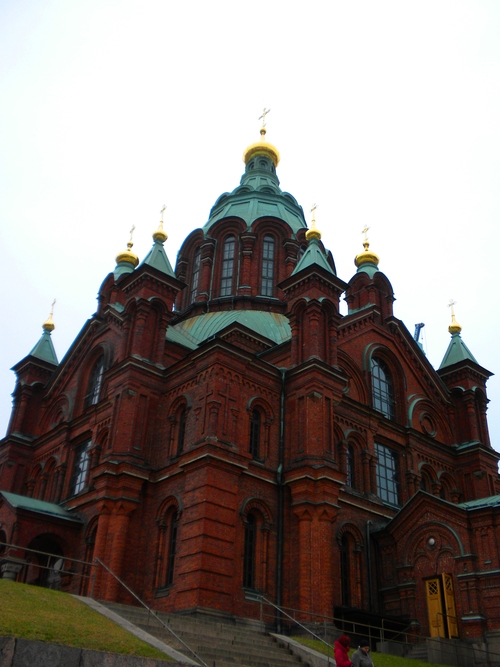 One of the perks of being a gypsy or a nomad is that you can go where the wind takes you. With that said, upon disembarking the boat in Stockholm from Riga, my friend boy and I decided that the best thing to do was see if there were any cruises leaving for Helsinki that day that we could score cheap last minute tickets for. We had our bags packed and nowhere to be so if the price was right, why not? The two night cruise we took to Riga was 400kr total (less than $60), and we were sure there would be something last minute to Helsinki for the same price, if not cheaper. After all, how many people step off one cruise and are immediately prepared to take another?

When we got up to the ticket counter we saw the lady who checked us in for Riga. Surely we could get hooked up with a sweet deal, she liked us. Or maybe she didn’t. We got a quote of 800kr total (about $115) for a two night cruise to Helsinki which was way out of our price range, and 100kr more expensive than what it was going for on their website the day before. Just having the wind taken out of our sails, we decided to sit down and think about it. We were still in vacation mode, we couldn’t just walk away. Maybe we should just splurge. When are we going to have the chance to go to Helsinki again? For a two night cruise, $115 is not so bad.

Back to the ticket counter we went, a little begrudgingly, but also excitedly. The lady who helped us before was gone so we walked up to the woman at the next window and asked for the cheapest tickets for the cruise to Helsinki leaving that day. Sure, 300kr for two ($43.68 according to my bank statement). Umm, there must be some mistake, but…yes, please!

The cruise itself was a little more eventful than the first one to Riga. The route between Sweden and Finland is infamous for being a major party boat that people just take with the sole intention of getting wasted onboard and buying more booze at a duty free to get wasted off board. I mean, if Rick Steves says so, then it must be true, right? Even the kids seemed down to party. Every time we passed the “casino” there was a new group of youngins playing the slot machines…. Parents nowhere to be found.

Then there was a fabulous midnight showing of some Chippendales meets West Side Story production. We wandered around a bit after looking for the dirty disco our Swedish friends kept telling us about. We found it and it was pretty dirty, but definitely not as exciting as our less-than-glamorous tin twin cabin fully stocked with beverages from Duty Free. For less than $22 a person, we were actually thrilled about it – have definitely paid more for a less-than-glamorous hostel bed in a room with 10 other people.

When we awoke in the morning we were already in Helsinki. Quite quickly we realized it was a little more spread out than Riga so in order to see most of the sights, we had to have a plan and not just wander. Once again we would have a limited amount of time to see as much as possible.  As soon as the boat hit the dock, we were off and running!

First stop was Uspenski Cathedral, the largest Orthodox church in western Europe. This is one of the more obvious examples of Russia’s influence on Finland with its green-and-gold onion domes. It is modeled after a 16th-century church near Moscow.

We then made our way over to Senaatintori, or Senator Square. The square is dominated by four neoclassical giants: the Cathedral (see below), the University of Helsinki’s main building, the Government Palace, and National Library. Of course it had to be all scaffolded up, just for us…

Soon it was time for lunch. Luckily, we had a local Helsinkian recommend a very cool restaurant called Tori so we didn’t have to worry about wasting time looking for a good spot. They claim to have the best meatballs in town and honestly, they probably do.

Tori is in the Punavuori design district which is a cool area with lots of nice shops and trendy restaurants. I wish we had more time to look around. It’s also close to a cute little park, which is where we headed after lunch to walk off the meatballs and take in some lovely views of Helsinki.

Temppeliaukio Kirkko (Rock Church) was our final stop. This church is truly a modern architectural work of art—it is completely embedded in solid rock! It is also one of Finland’s most famous tourist attractions.

In my opinion, Helsinki was just like Stockholm except colder and quieter. Next time I visit I’d like to see the gorgeous countryside and lakes that I’ve heard so much about—preferably in the summer, and preferably with a lot of sauna action involved!