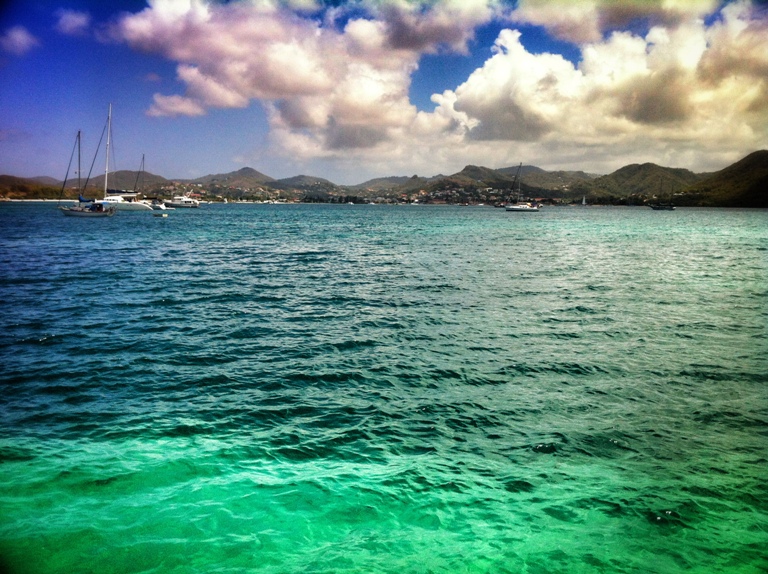 If you’ve been following The Blonde Gypsy on Facebook or Instagram, then you know the reason for my silence on the blog lately was understandable: I went on holiday to St. Lucia!

That’s right, I took a vacation. It wasn’t something I planned on writing anything about since it was a personal trip with family and friends, but then I discovered the difference between traveling and vacationing and well, I’m just unstoppable now.

Though it seems like I am on holiday all the time, the truth is I can’t recall the last time I visited a place where I felt like it was ok to take everything at face value and just enjoy without worrying whether or not I was seeing and doing as much as I could. I always want to know more, meet locals, and have as many authentic experiences as possible rather than just pass through like a stranger in the wind. In St. Lucia all of this went out the window for about a week. Can you see why?

For this particular trip, my main purpose for going down there was plain and simple: I wanted to spend time with my people. We could have been sitting around in a circle at some seedy Motel 6 in Watt’s eating Roscoe’s chicken and waffles for all I cared, I just wanted to hang. Fortunately I was invited down to a tropical paradise instead and though I don’t usually cover the Caribbean much on this blog (minus the odd occasion I contemplate making a drastic life change in that direction), I thought it would be a nice change of pace to show and tell you about my time in St. Lucia. If not to give you some recommendations on what to do if you ever make it down there, then just a little tropical vacation for your eyes.

Lounging Around and Looking Sexy

Lounging around and looking sexy is pretty much what we ended up doing most of the time. Thankfully this was made easier for me by Stunner of the Month who was gracious enough to gift me a survival pack of sexy stunner shades just in the nick of time.

St. Lucia is a super slow island with not that much going on which is a wonderful quality to have in a destination if you’re looking for maximum relaxation and minimal obligation to “do touristy things”.

When we weren’t lounging at a nearby resort honing our wildlife photography skills or on a nearby beach drinking St. Lucian Coco Locos, then we were out on a boat casually snorkeling and taking dips in the Caribbean Sea with the beauty of the south part of the island as a backdrop.

We had one real “big day out” and that was the day we drove to Soufriere. It was the worst drive ever from where we were staying in Marigot Bay (hangovers and hairpin turns don’t mix well, thought I learned that lesson once before), but it was totally worth it as we got to check out the second largest city on the island and go for a dip in a sulphur mud bath.

The drive-in volcano was not as cool as it sounds, unfortunately. Thought we would be driving into something with boiling hot magma all around, but actually we just walked down to this smelly as sh*t smoky area where “guides” talked for 5-10 minutes about how there hasn’t been a real eruption there for 40 million years. Oh yes, and they like it smelling that way because it means the gases being emitted are not toxic. Or something like that. I wasn’t really listening – I told you I was on vacation!

I’m proud to say that I did come up with one brilliant idea for the trip and that was a visit to the island’s rum factory.

I had to see if it was possible to visit the place I knew most of our money would be going to that week and found out that not only did they offer tours, but at the end of the tour came a RUM BUFFET. Very impressive.

Hike up to Pigeon Island

Hiking up to the top of Pigeon Island National Park was perhaps the most active we got the entire week and occurred on the last day.

Weird thing is that it’s not actually an island. I can’t tell you why they call it an island anyway, but I can tell you it gives you some pretty spectacular views.

Most people only make it up to the fortress which is not a bad accomplishment, but the more ambitious and able-bodied make it up to Signal Peak as well. Not sure how the hell I ended up there in a mini-skirt and flip flops, but I did.

So that was my St. Lucia trip in a nutshell. If you’ve been then you know that I missed out on two of the island’s biggest attractions – the capital city Castries and the fish fry in Gros Islet/Anse la Rey – but I don’t care. The biggest and only attraction on this trip that I cared about were the people I was with which in the end made this a true vacation, one of the best I’ve been on in a long time.