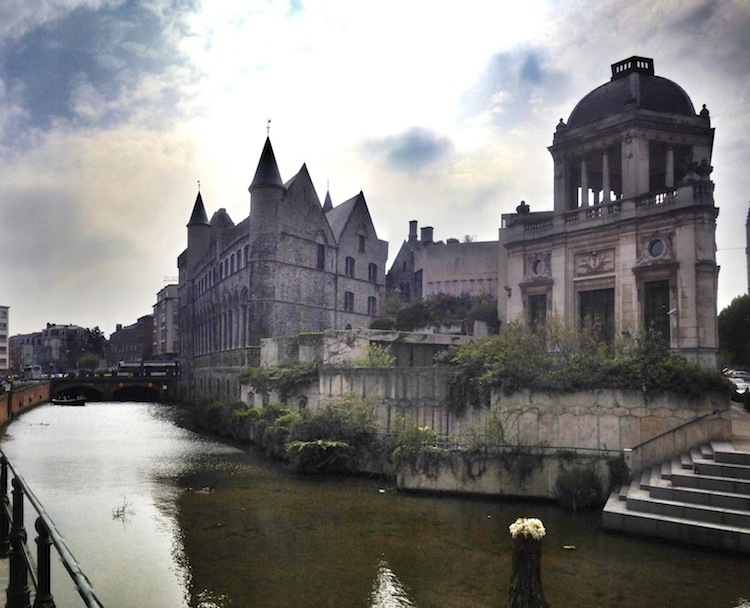 Trainsetting Europe: Getting Down With Ghent

Following my afternoon of fun in the sun with 15,000 other tourists in Bruges, it was onwards to Ghent/Gent. The third largest city in Belgium.

Since it is conveniently on the way from Bruges to Brussels (20 minutes and 45 minutes, respectively), I figured I’d just stop for a quick peek before heading to Belgium’s capital to end my day. Little did I know I was in for a mission and a half and my “quick peek” would last over 3 hours with 1/3 of the time spent just trying to figure out where the hell I was and if Ghent actually had a city center.

That “no turds” sign isn’t the only thing that was awkward about this situation..

Here was the deal: Gent St. Pieters, the main train station, is about a half an hour walk to the center or a 15 minute tram ride (#1, 10, 11, 12 & 13). I might have known this had I done some research before my arrival like a normal person, but since I was just winging it that day, I ended up wandering far, far into the wrong direction for over an hour. My bad.

Really glad that happened in the end as getting lost down its backstreets gave me a good feel for what the city is all about. A crazy mix of residential, industrial AND storybook that has managed to keep it more real than Bruges and Brussels. At least that’s how I saw it.

Ghent’s got some personality and came off as a place that I could really have a lot of fun in if I came back and spent some more time. It seemed to be the least touristy out of all four Belgian cities I visited which is a mystery to me as I actually found it to be the most beautiful.

Getting down with Ghent was a great choice and deserved much more than just a peek so keep that in mind if you ever make it to Belgium.

P.S. Soulwax aka 2 Many DJs are from Ghent.