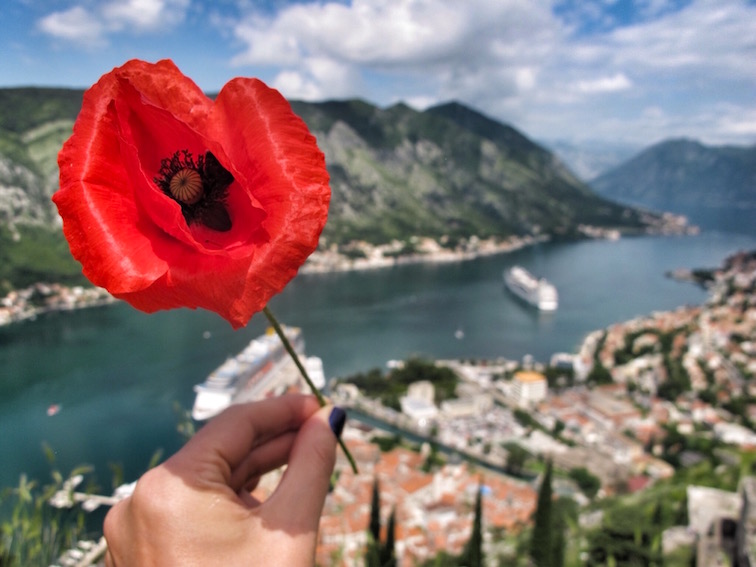 6 Things You Shouldn’t Miss (But Might) in Kotor, Montenegro

Back when I first visited Kotor, Montenegro in 2013, it was way more of a sweet little secret reserved mainly for those looking for interesting new alternatives to the well-trodden spots around the Adriatic. That or a very pleasant surprise for those who were lucky enough to have it tacked on to their cruise itinerary. Three years on though and I guess you can say Kotor has become kind of a big deal. Like Ron Burgundy style. People know her.

Having landed the #1 spot for top cities to visit in 2016 by Lonely Planet, the cat (or shall I say Cattaro) is out of the bag and tourists are starting to flood in with good reason. Kotor is truly is one of the most beautiful places I’ve seen in all of Europe and even after four different visits, it still takes my breath away every time I catch my first glimpse of it.

So much more than just a pretty old town, on my last visit I had the opportunity to explore it much deeper than ever before and have some suggestions for you to not only get the most out of a stay in the Bay, but also where you can go to miss the crowds that will no doubt continue to grow larger and larger – and rightfully so.

If you’re looking for an interesting place to stay while in Kotor, the historic Cattaro Hotel is a perfect choice. It literally spans most of the wall of the South Gate entrance which is why you may not notice it at first – it just sort of blends in – but with quite possibly the best location in town, you definitely shouldn’t miss it if waking up in a boutique hotel with this sort of view sounds appealing to you.

Aside from the excellent views, Cattaro Hotel is also a functioning piece of history as it occupies the historic Town Guard Tower, Rector’s Palace, and theater which Napoleon had built while he was occupying the area in the beginning of the 19th Century. For those interested in maritime history, you’ll absolutely love the interior decor with all its paintings of famous ships, captains and naval battles. For those interested in sexy cappuccino or cocktail with a view, its restaurant/bar “Royal” has you covered, too.

Perhaps the number one attraction for anyone visiting Kotor is a climb up to St. John’s fortress. You gotta do it even though it is quite a hike – 1,350 steps, 400 meters up, and around 30-45 minutes each way depending on how fast you walk or stop to take pictures which at first will probably be every 30 seconds or so…

Most people start from the entrance points within the city walls near St. Mary’s Church or Pjaca od Salate (Salad Square – seriously), but the best way in my opinion is taking the old Austro-Hungarian road up that lies just outside the city walls near the Northern Gate. Just exit the gate, cross over the two bridges, hook a right at the main road, and follow it to the end. You can’t miss it.

Climbing this route has several benefits, the first being that I think it’s a little less physically challenging than the main way and, depending on the time of day (I chose morning), a bit more shaded from the sun which could save your life in the heat of June, July and August.

Then there’s the history behind it…Obviously any route you take up is full of history as the fortress dates back from at least the 6th Century, but following the Austro-Hungarian route up is interesting as you can get a real sense of what it must have been like making the trip back in the day with horses or whatever other modes of transportation they were using towards the end of the 19th Century. Built in 1879, the road connected Kotor with Centinje which was the capital of Montenegro until the First World War.

And finally, there is this:

Just off to the left, what might seem to be some sort of mirage is actually in fact that bar you were hoping you’d find hidden up there at 9am complete with fresh rakija and even fresher cheese. Or maybe that was just me?

Either way, it blows the little halfway stopping point on the inside of the walls out of the water (right outside the Madonna Della Salute Church) where you can just find a few chilled beverages from coolers, herds of tourists, and probably half of all souvenirs being sold in Kotor. As well, in taking this route you will get a chance to pass by this lovely little abandoned church on your way into the walls.

Near the bar/church there is a small hole in the fortifications you can pop through to take some amazing photos and either continue your ascent up to the very top or head back down to town. Or continue onwards to Cetinje if you’re feeling extreme.

A hike to Gornji Stoliv

On the topic of hiking and physical activity, another fantastic spot to catch some great views of the Bay is a short climb up (about 30 minutes) from the small village of Donji Stoliv which is just opposite of Perast. I had the pleasure of partaking in this extremely mild hike with Vlako from ZalaZ who is known as “the mountain guy” around Boka Kotorska. Having initiated much of the trail marking you will find around the Bay, he really knows his stuff and is just a wealth of knowledge in terms of finding the best view points, abandoned villages, and cool fortresses lying around these hills.

Gornji Stoliv (literally upper Stoliv) is a semi-abandoned village with a population of about two – or three if Brano from Tivat is in town checking on his family property. He was kind enough to invite us into his house that has been abandoned for quite a few years and as well offer to sell it to me along with all of the remaining contents for a cool 100,000 euros. Unfortunately I was unable to take him up on what seems to be a priceless piece of real estate, but if you are interested you can contact him directly at +38269515380.

And if you’re up for a larger hiking challenge, you can actually walk all the way back to Kotor from Gornji Stoliv along the ridge of Vrmac. Takes about 6 hours but by all accounts more than worth it for the incredible scenery of both the Bay and Adriatic Sea.

A cruise in and around Boka Kotorska

Absolutely, positively you HAVE to get out on a boat in Boka Kotorska. Whether you rent one yourself or hire someone to take you on a little cruise, it’s just the ultimate way to feel the magic of what many people call one of the most beautiful fjords in the world – but what they should actually be calling a ria. You’re welcome for the knowledge.

You can find tour operators and rentals along the waterfront with options ranging from a half hour to the entire day. One of the most popular spots to head to is the town of Perast and the islands just off its shore, Saint George and Our Lady of the Rocks, but please don’t ignore all the other lovely little maritime villages along the way. Donji Stoliv, Prčanj (below), Ljuta, Risan, Morinj…they are all quite special in their own right.

I would also highly recommend if you have your own wheels (car, bike, etc) to do some cruising around the edge of the Bay as there a lot of cute little cafes, restaurants, and stop-off points where you can just chill and soak in all that beauty. The road is pretty narrow, but I didn’t find it challenging at all with a car though next time I wouldn’t mind tracking down a motorcycle…

If you ever happen to be in Kotor in June, you might be in for a real treat if you happen to visit during SeaRock Festival. This year will be the fifth year in a row this event has been organized to kick off the summer with some good ol’ fashioned rock n’ roll and Kotor’s old town as a very special music venue. Wilco is performing this year (June 24th) and the best part is that entrance is free.

Church of Our Lady of the Rocks

It seems like common knowledge that visiting the town of Perast, about 30 minutes north of Kotor, is not to be missed on any visit to Kotor – but perhaps visiting the church on the artificial island of Our Lady of the Rocks is not.

For sure it is nice to admire from afar, whether from the shore or a boat, but its interior is nothing short of amazing and really puts into perspective just how strong the town’s ties to the sea has been for over 500 years.

Legend says the island (the only artificial island in the Adriatic) was built on top of a rock where two sailors found a picture of the Virgin Mary in 1452. From that point forward, local sailors would lay another rock following their return from a successful voyage and once a year, on July 22nd, this tradition is commemorated in an event called Fašinada where locals row out and lay some more rocks to keep the tradition alive.

It’s no surprise then that Our Lady of the Rocks Church, built in 1632, became somewhat of a sailor sanctuary over time and actually where you can find the largest collection of silver votive plates in Europe stuck on its walls also left by returning sailors. Each one depicts their own unique story about what happened to them out at sea as well as a special shout out/thanks to the Virgin Mary.

Also of importance are the 68 paintings on the wall done by local artist Tripo Kokolja and this famous tapestry (below), what I like to call “the Mona Lisa of Montenegro”, that took a local lady 25 years to embroider using gold and silver fibers as well as her own hair while she was waiting for her husband to return from sea. Unfortunately I don’t think he ever did and she eventually went blind while making it so depressing story all around but she definitely left one intricate piece of art for the world to admire.

A Tara Canyon Experience Like No Other at Grab Ethno Village, Montenegro