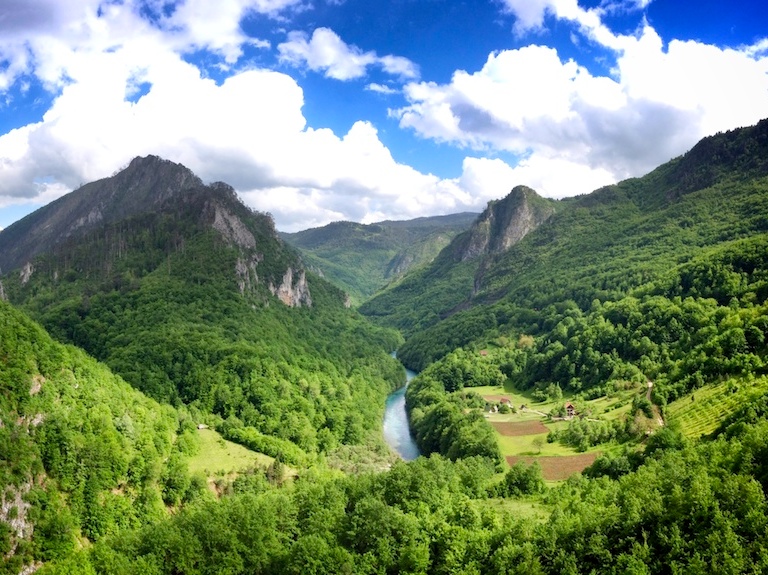 Meet Montenegro – Darling of the Balkans

Meet Montenegro, one more “pearl of the Mediterranean”, or according to me,

darling of the Balkans.

Chilling just south of Croatia and north of Albania, Montenegro is one of the most manageable and pleasant countries to travel around in this part of the world. Having recently returned from a couple of wild nights down in the south with my Balkan Tours crew and a two-day girls’ retreat in its mountains, I can safely say it has become one of my absolute favorite countries to spend time in and a place I wouldn’t mind setting up shop for a semi-extended period of time. Unlike its neighbors to the north and east, Montenegro didn’t have much fighting (or any) on its soil during the most recent Balkan wars so infrastructure, though not perfect, is in place and most of its cultural treasures well-preserved.

Perfectly petite, strikingly beautiful, absolutely charming, and loved by many throughout the region, allow me to introduce to you to some of the cool places that make up this little darling also known as Crna Gora, or Black Mountain.

Holding the esteemed title of “least visited capital in Europe”, Podgorica is a place you will probably end up at some point either on your way in or way out of Montenegro. For a capital, it’s surprisingly (but not really) cheaper than most of the other places on this list, and even though it doesn’t have any “wow” factor whatsoever, I found it to be interesting enough and worth spending at least a night or two in if you have the time.

A casualty of Nazi and Allied bombings, much of the city was destroyed during World War II but a small sliver of Ottoman-ness remains in Stara Varoš. The old clock tower (below) is probably the main sight to see in the city which is nothing spectacular,  but there is a bomb ass restaurant called Pod Volat just off to the left that’s totally cheap and totally Balkan.

Saborni Hram Hristovog Vaskrsenja is a newly-built Orthodox church in the center that’s pretty good-looking, or at least was on its way to being good-looking when I was there last year. Aside from those three sights (because you really should include that restaurant as a sight, it’s awesome), I have nothing else to recommend at this juncture because we stopped “sightseeing” and just went to have drinks at a cool retro Yugoslav dive bar called Titograd.

Ok, so four sights…Go to Titograd and ask for Toni. He made great mojitos and a mix CD for me with his name written on it which is the only reason I remember this information. Thanks if you’re reading this, Toni. Anyone who mixes Roxette and The Godfather theme song in the same place is alright with me.

Budva is the place I thought I would enjoy the most on my first jaunt through Montenegro, but that wasn’t the case. It’s gorgeous, don’t get me wrong, but too saturated with Russians (like me) and tourists-of-the-obnoxious-variety for my liking which made Budva feel like “just another resort town”. Would love to give it another chance though as I know there is a lot I missed that can easily change my mind, but until then…how sweet was this guy’s hat?

On the brighter side, the old town there is pretty cute and the one thing Budva and its surroundings does have that lots of places along the coast don’t (specifically north) are semi-sandy beaches which I suppose anyone hankering for a day at the sea would find attractive. Pretty tasty seafood as well…

The famed Sveti Stefan was also another major disappointment. Not because it wasn’t ridiculously gorgeous like I had anticipated – it absolutely was. But because you can’t actually access the little nugget unless you are sleeping there or have reservations for lunch or dinner at its predictably pricey restaurant.

I should also mention that its sexy private beach pictured above will also set you back 50 euros if that’s where you want to tan your buns. I’m going to get there someday, but in the meantime I’ll just have to settle with this awkward photo taken by Yomadic on its rocky south side. What an amateur.

Kotor is a lot of things, but a “poor man’s Dubrovnik” it is not. Whoever came up with that was sadly misinformed. Or blind. Or all of the above.

Cruise ships may be coming and dumping a crazy amount of day trippers into the city for only few hours without pumping any money into the local economy whatsoever, but still, Kotor has managed to stay much more real than Dubrovnik. In fact, I think it should be called “the smart man’s Dubrovnik”.

During the high season you won’t be able to escape the crowds really anywhere along the Montenegrin coastline, but stick around for more than a day in Kotor and I promise it will be much more worth your while than Budva. There are seriously priceless views all around, especially once you climb to the top of St. John’s Fortress, and if you speak to the right locals you can get taken around Boka Kotorska (Kotor Bay) on a leisurely, private boat ride for a reasonable price to take it all in from a different perspective.

If a “leisurely boat ride” from Kotor tickles your fancy, one spot you can easily hit is very Venetian Perast.

If you want to pass on a private boat, another option is to just drive there or catch a local bus that costs under 2 euros and takes 20 minutes or so. However you get there, one thing you really must do is sail over to Our Lady of the Rocks and St. George Island just off its shore. Our Lady of the Rocks is apparently the only artificial island in the Adriatic Sea created by local citizens way back in the day by transporting the stone over enemy ship wrecks or something of that nature. Google it.

I’ve never been one to dream about having a house with a white picket fence, but hanging around Žabljak in northern Montenegro kind of changed that. Switch “house” to pimped-out cabin and “white picket fence” to a dog named Dino and a miniature pig that wears boots (Google it), and you might get a better idea of where you can find me in a couple of years if all goes to plan.

Žabljak is a great place to start your exploration of the north. It’s the highest municipality in the Balkans at 1,456 meters and in the heart of Durmitor National Park. Down the road you have Crno jezero, or Black Lake, and within 30 minutes you can be out party rafting in Tara River Canyon, UNESCO world heritage site and the second deepest canyon in the world. In winter it’s all about the skiing and snowboarding.

While I can’t claim to have seen all of Montenegro yet, I’m going to go out on a real limb here and say Ulcinj in the far south is one of the most interesting towns in the entire country – and also one of the cheapest.

A place of legends (like real-life pirate ones), a place to spend some lazy beach days, a place to party it up, a place to fall in love. Most visitors to Montenegro (minus Balkan ones) tend to miss this town which is really a shame as it has a lot to offer and tons potential to become one of the country’s top vacation spots.

Its biggest draw is of course the fact that it’s there where you will find those beautiful, sandy beaches you were looking for all along. While Mala Plaža (“small beach”) in the Old Town is the easiest to get to, it’s, well, small and can get extremely crowded in the summer months. Velika Plaža (”long beach”), on the other hand, it’s, well, LONG – thirteen kilometers to be exact – making it the largest stretch of sandy beach on the Adriatic coast and yours for the taking as it remains mostly undeveloped.

Sounds amazing, and it is, but be forewarned. Unless you are staying at a hotel or guesthouse near Velika Plaža, don’t mind extremely long walks on the beach (remember, 13 kilometers), have made a cool taxi driver friend you can call up on demand, or have your own set of wheels to take you where you want to go…it can be really annoying trying to get there from the center of town which is about four kilometers away. Public transportation between the two may exist, but even the locals were skeptical about its efficiency and judging by the layout of the land there it would still be a mission to get from the closest main roads to the various beach clubs or empty stretches of sand, especially in the summer heat.

This is frustrating for the independent traveler who wants nothing to do with driving a car while on holiday, but until some infrastructural improvements are made, it’s the only way you will be able to see the best that this area has to offer. Beautiful Valdanos Bay (below) and its surrounding olive groves – some of the largest in Montenegro – to the north of the Old Town as well as birdwatchers’ paradise, Lake Šas, towards the Albanian border included.

And then there’s Ada Bojana. The bohemian two square-mile island formed where the Bojana River meets the Adriatic Sea famous for its nudist enclave and “anything goes” atmosphere. Even if you don’t even up staying there or aren’t into nakedness, a trip down to Montenegro’s southernmost trip for a peaceful stroll-around and delicious meal at one of the area’s many great seafood restaurants is a definite must.

This is the end of my brief introduction to magnificent Montenegro, I hope you enjoyed it and/or found it useful. I also hope this is not the last time you visit this post because it is a work in progress as I fully intend on adding more great places to visit after I return from traveling around it some more. Or maybe you have some more suggestions?