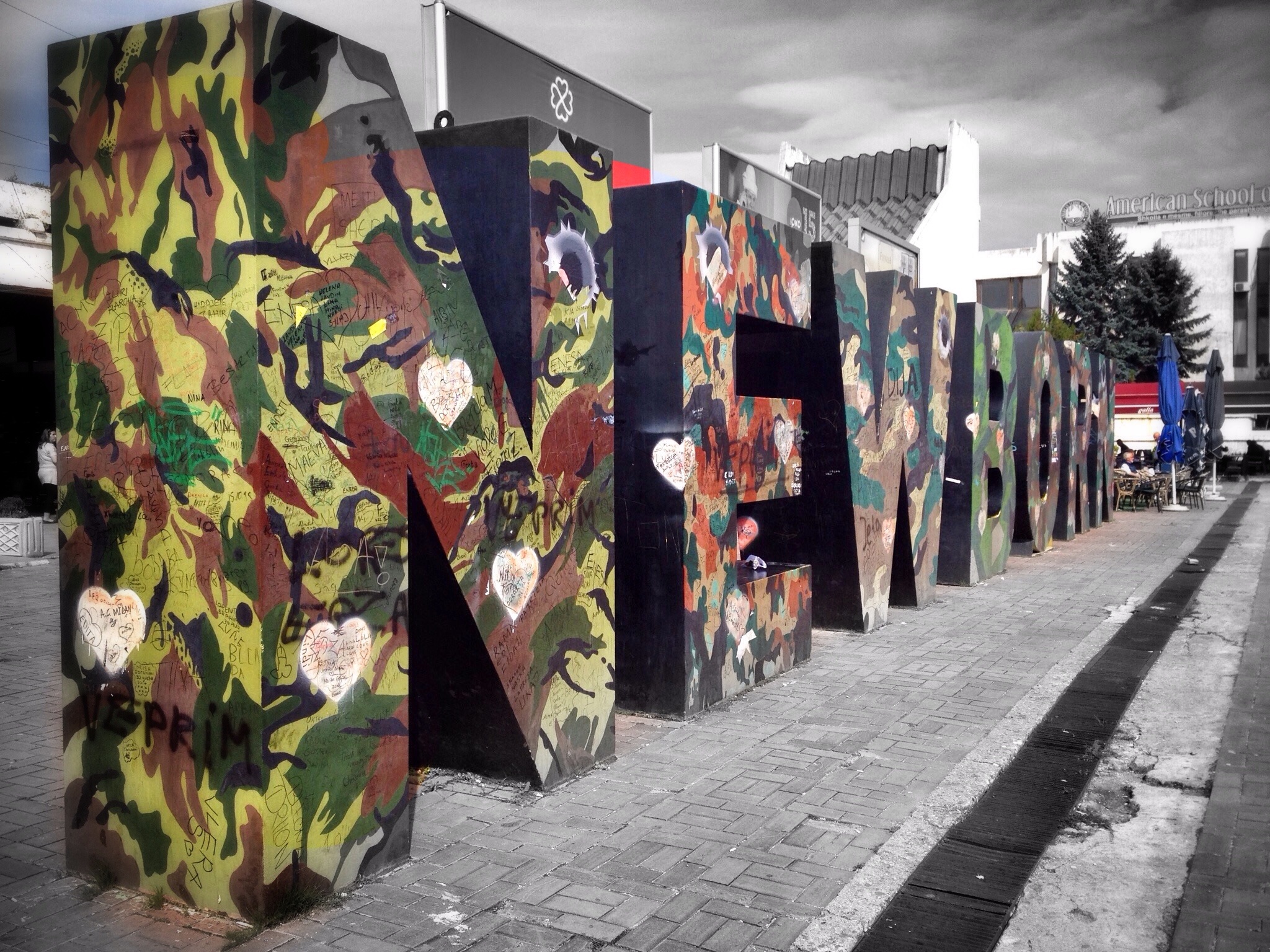 Six Things You Shouldn’t Miss (But Might) in Prishtina, Kosovo

Prishtina can often feel overwhelming and underwhelming all at once for any first-time visitor. From the kitsch Americana tributes and the endless concrete apartment blocks to the unexpected liveliness you can feel any day of the week walking down Mother Theresa Boulevard, I think a lot of people literally don’t know what to make of this place once they arrive.

Though the tendency for most is to pop in quick on their grand tour of the Balkans just to check a country off their list that as of now has only been recognized by 114 countries in the world (of course this number will be constantly increasing) and to drink a macchiato, the truth is they usually end up leaving without getting any real idea about what they just walked into by giving it only a day or – god forbid – a few hours. To really “see” Prishtina is to feel Prishtina which definitely takes some time, but in the event that you are pressed for that, here are six things you shouldn’t miss (but might) while hanging around the capital of Kosovo.

A far cry from most European “old towns” you’ve ever wandered through, Prishtina’s is an architectural mix of communism, Austro-Hungarian, Ottoman, and sadly, neglect – but nevertheless, it does exist and it has its own charm.

A little over a century ago, Prishtina was a multi-cultural and vibrant trading town where you could find Turkish, Albanian, Serbian, and Jewish communities living side by side, a bustling Grand bazaar, and a couple of rivers running through. Fast forward to Yugoslav times and sadly just about all of that was destroyed thanks to the communist demand for “out with the old, in with the new”. Because of this it might initially appear as if Prishtina is deplete of any sort of cultural heritage, but that’s the biggest reason why you shouldn’t miss seeing what is left of “old Prishtina”, even if it isn’t all that much. Starting from the Çarshi Mosque (Stone Mosque) across Agim Ramadani where Mother Theresa Boulevard ends, don’t miss the Museum of Kosovo (should the government ever decide to re-open it to the public), Jashar Pasha Mosque, Sahat Kulla (the clock tower), Fatih Mosque, the Great Hammam, and of course the Emin Gjiku complex.

The story behind the Newborn Monument

As the most photographed monument in Prishtina, the Newborn sign situated directly in front of the Palace of Youth and Sport really isn’t all that exciting. That is of course unless you know the full story behind it.

The brainchild of the creative agency Ogilvy and Fisnik Ismaili who is now a well-known member in the Parliament of Kosovo, it popped up on the day Kosovo declared independence, which was February 17, 2008. NEWBORN, which by definition is “of a child or animal (edit: or nation) recently or just born, was and is a very meaningful statement for anyone has ever been fighting to exist. This meaning will always remain for sure, but what a lot of people often miss is the symbolism behind the paint it happens to sport year to year.

Every year on its birthday, Newborn gets a makeover and I’ve been lucky to see it dressed up in four different costumes. This year, for example, the “N” and “W” have been knocked down so aerially it also reads “No Walls” in reference to the wall that was built (and recently torn down) in the northern city of Mitrovica last year. All of that is to say, don’t miss asking a local not only where you can find the Newborn sign, but also what exactly the design of it is supposed to symbolize that particular year.

If you’re driving around town, not walking, the National Library, perhaps Prishtina’s second most famous landmark, is kind of easy to miss as it is sitting in the mush pot of the University of Prishtina’s block of land directly opposite the Catholic cathedral.

Love it or hate it, it makes a statement and is one of the most fabulous Brutalist, or “New Regionalism” (whatever that means), pieces of architecture in the region. Whether you choose to interpret the cupolas as brains or qeleshet, that is your decision, but definitely don’t miss entering inside as it has some really gorgeous filigree pieces from Kosovo hanging on the wall in the main hall and from time to time special art exhibits on display on the second floor.

Extremely hidden in the neighborhood of Ulpiana, not too far off from the National Library on Rr Egnatia, is a completely unassuming little artist colony where you can find some of Prishtina’s most talented and up-and-coming artists creating masterpieces in all forms.

In a place where art is not necessarily cultivated or quite honestly cared about much by the majority, you can visit painters, tattoo artists, fashion designers and graphics designers who made an active decision to come together for the greater good of the humanities. Don’t miss the chance to meet and/or share a beer with some of the pioneers in a city which I am absolutely certain will become one of the next underground art capitals of Europe in due time. Berlin, you’ve been done a while now.

News flash: Kosovo isn’t one big block of concrete. I know it’s pretty hard to tell if you only confine yourself to the immediate center, but hop on Bus #4 towards “Germia” and I guarantee you won’t be disappointed. This 62 square kilometer regional park on the outskirts of town is certainly not a secret, but wander even further past the trendy restaurants in the center everyone tends to gravitate towards once they arrive (Villa Germia and Freskia), and I guarantee even more so, you will thank me.

If you want to get wild, you can walk all the way to Badovc Lake and the beautiful Bear Sanctuary depending on whether you are able-bodied and willing enough. Plans are in the works for a proper trail with signage, but in the meantime, don’t miss getting rugged and becoming one with nature in place you initially thought you never could. In the summer this is also one place you don’t want to miss any scheduled festival or party which brings me to my last point…

If you are already traveling through the Balkans, Prishtina’s nightlife really needs no introduction; however, it is perhaps the easiest thing to miss as I would guesstimate 65% or more of all tourists passing through are only visiting for the day. Sad.

Sit back, relax and FEEL Europe’s youngest capital city (historically and demographically) if you have the chance. Whether you’re a dive bar kind of gal (hi, that’s me) or a party-all-night-long kind of fellow, Prishtina is here and happy to meet your demands. And the best part is just about every venue is within walking distance or a €2 cab ride away. Watch this space for further recommendations, please.

If you take anything away from this article, let it be you should not miss spending more than a night or five in Prishtina. It’s a capital city full of secrets and surprises, and though I only mentioned six things that shouldn’t be missed, there are certainly hundreds more depending on who you ask. Any other recommendations on things that shouldn’t be missed while in Prishtina?