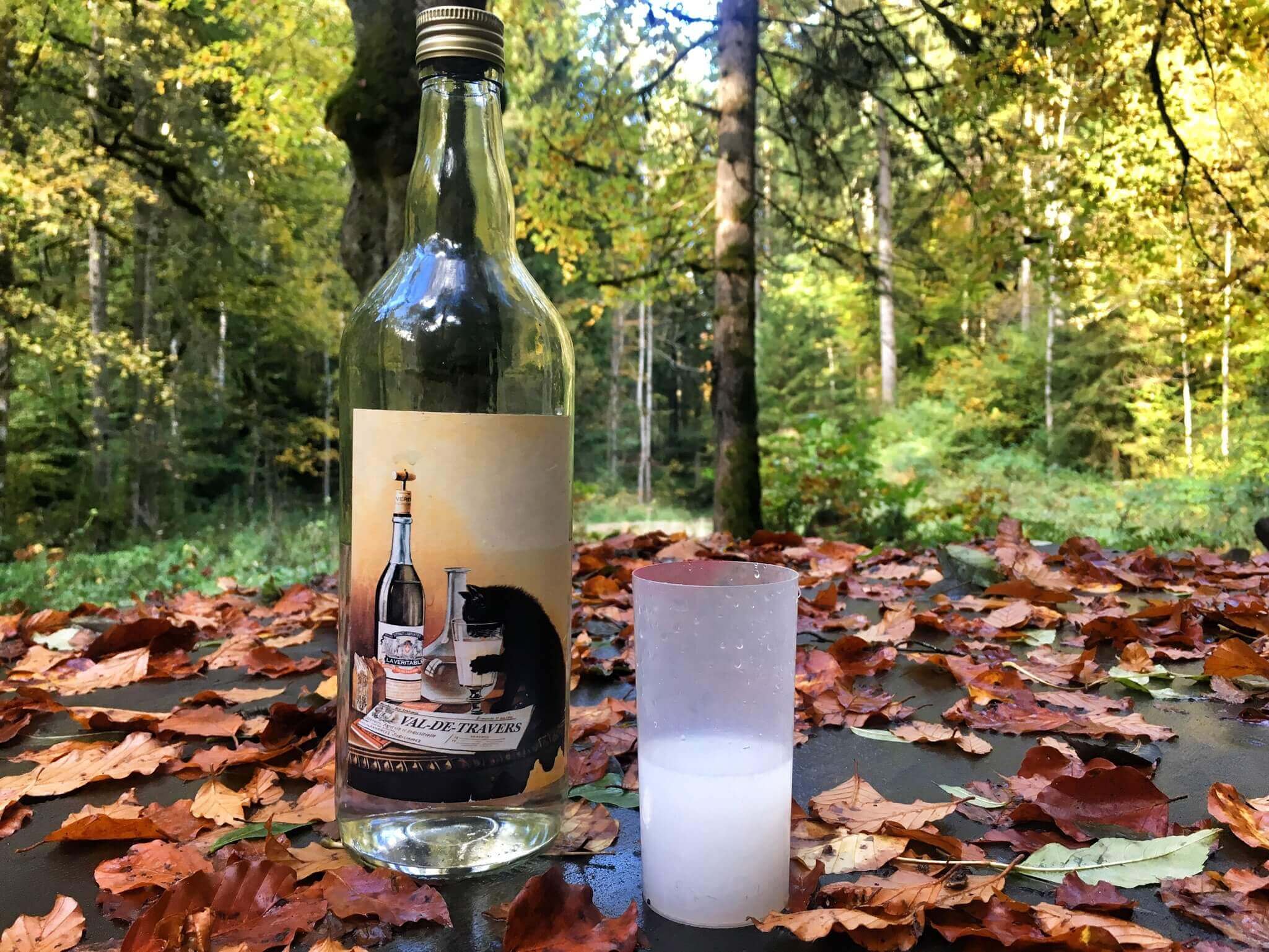 After four years of sticking mostly to the Balkans while exploring Europe, I recently decided to shake things up and head back to the westside to see what lesser-known and/or unique things I could find around some of the most trodden paths on the continent. Switzerland seemed like an excellent place to start since 1) it is what European travel dreams and a majority of Eurotrip itineraries are made of and 2) it is like three countries in one with French, German and Italian all spoken as the main “language on the street” depending on which part of the country you land in (special shout out to Romansh which I can’t necessarily pair with any other sovereign state). With that said, Romandy – la Romandie – was the first place on my radar for more reasons than it just sounding sexy and knowing I’d be using bonjour, oui, merci, and santé on a daily basis. It was also because, well, ABSINTHE and ARCHITECTURE. Read on…

Getting acquainted with Neuchâtel town

As my first real dip into Romandy, the French pocket of “Suisse” (because I don’t count the two times I’ve been in Geneva, that city was too international for me to grow any feelings), Neuchâtel kind of stole my heart with its medieval Old Town, its situation right next to lovely Lake Neuchâtel – the largest lake located entirely inside of Switzerland, and its palpable “Frenchness”. Even my friend who has been living in the Swiss Alps near Lucerne for over two years said she didn’t feel like she was still in Switzerland when she visited me there!

The center is highly wanderable with a great public transportation system that even includes funiculars making it much easier to get up and around to explore its hilly surroundings. Neuchâtel is one of those wonderful Swiss destinations where overnight guests of any holiday accommodation are entitled to a free Transport Card for the entire public transportation network within the canton. Who said everything about Switzerland had to be expensive?

While Neuchâtel will appease everyone looking for “storybook beautiful” with all of its yellow sandstone buildings, classic medieval archicture, a lively lakeside promenade where it seems like every local hangs when the sun is out, and sweeping hillside views where turrets dominate, it still has plenty of grit to it (and some awesome dive bars) which can be a welcome relief in a country that often seems too pristine to be true.

Hanging out in the heaven that is Hotel Palafitte

Another big draw to Neuchâtel for me was the chance to experience one of the most unique hotels in all of Europe, Hotel Palafitte.

Built on stilts 800 meters from the center of Neuchâtel, Hotel Palafitte is the only five-star hotel in Europe surrounded by water where you can feel tropical bungalow vibes whilst enjoying views of the Swiss Alps from the front and rolling vineyards on the hills behind. I had the pleasure of staying in one of their 26 “lake pavilions” which all include their own private terrace and it was indeed a hotel adventure like no other as was anticipated.

A true architectural masterpiece, Hotel Palafitte was opened in 2002 for the National Expo and meant to be just a temporary installation, but not surprisingly it received rave reviews so they kept it running. The concept of the hotel is based on a palafitte, a prehistoric dwelling built on piles, which have been found in Lake Neuchâtel and many other lakes in Switzerland. You can learn about those and more at the Latenium, an archeological museum down the road in Hauterive.

The lake is what takes center stage no matter where you are or what you are doing at Hotel Palafitte, whether it is dining in the restaurant, taking out one of its kayaks, or simply holing yourself up in your pavilion the entire time which I was perfectly happy doing. Regardless that it was around the beginning of October and leaves were just starting to “fall”, you bet I made use of that amazing terrace (and its swim ladder) which is absolutely the most special thing about staying there in my opinion – quality time with Lake Neuchâtel.

Other favorite features of my aquatic apartment were the jacuzzi bathtub with removable partition so you could have a view of Mont Blanc while you bathe and the motorized shades/screen on the floor to ceiling window so I could fall asleep to the sounds of the lake without the risk of getting eaten alive by insects. Palafitte livin’ is pretty spectacular, if you ask me….

Not only visually appealing, but also environmentally friendly, Hotel Palafitte is a perfect example of “sustainable architecture” utilizing rainwater collection for toilet flushing, solar panels for hot water and electricity, and heating is produced from kitchen waste. I could really go on and on about how impressed I was, but I think it’s clear that it really is a phenomenal place and a phenomenal experience which I would highly recommend if you are ever looking for a unique hotel stay in Europe.

On the topic of awesome architecture, another cool place I found around Neuchâtel is La Chaux-de-Fonds, the Art Nouveau capital of Switzerland and a UNESCO town recognized for its watch-making culture which dates back to the 17th century.

My girlfriends and I decided to take the 20 minute and incredibly scenic drive from Neuchâtel up into the Jura Mountains to visit the hometown of Le Corbusier and Louis Chevrolet (yes, that Chevrolet) where Art Nouveau was first introduced towards the end of the 19th century by wealthy watchmakers. While we ended up just doing a drive-by to get a taste, serious architecture buffs can download a free brochure from Neuchâtel Tourism that includes a suggested walking tour itinerary that lasts about 2 ½ hours and will lead you around to all the highlights. By public transportation, you can reach it in just 30 minutes by train and for free with a Neuchâtel Transport Card, so overall an easy half-day trip and if you have extra time there is really no excuse to miss it.

On the Absinthe Trail in Môtiers

I’d be straight up lying if I didn’t say the eighteen days I ultimately spent traveling around Switzerland in September and October wasn’t largely sparked by a major discovery about the country – and Neuchâtel in particular. It is where absinthe was born and where you can now find an ABSINTHE TRAIL that extends into France.

La fée verte, the Green Fairy, and perhaps the most vilified spirit of them all….while in Romandy I got to learn all I ever wanted to know about absinthe and its fascinating history that began (at least commercially) at the very end of the 18th century in a small village called Couvet, just thirty kilometers west of Neuchâtel in a region called Val-de-Travers.

What started as a local, botanical remedy for ailments (main ingredients are wormwood, anise, sweet fennel, and up to a dozen other herbs) quickly spread across the border from Val-de-Travers into France and ultimately went global as the drink of choice for everyone from military men to the most renowned writers and artists of the time like Oscar Wilde, Manet, Van Gogh, Picasso, Lord Byron, etc.

What came next – and what’s not talked about as much (just the myth perpetuated) – is one of the greatest smear campaigns of all time in which absinthe was falsely demonized as a hallucinogenic that made people crazy and/or violent thanks to jealous winemakers and those on the temperance bandwagon. This directly led to absinthe’s prohibition in Switzerland and many other places within the first decade of the 20th century and lasted for nearly 100 years.

If I had more time I would have loved to have stayed a week on the trail and written an entire series about all of this, but instead I had to settle for just one day in Môtiers which is probably the best place to start any Absinthe Adventure because it’s the home of Maison de l’Absinthe, what I am convinced is the best (and most thorough) museum on the planet dedicated to the spirit.

Spread out over three floors in what was once the District Court where clandestine distillers were convicted during the prohibition period, exhibits (also translated in English) take you through the production process, a display of artifacts from its heyday during the Belle Époque,the phenomenon of the Heure Verte (green hour), and the entire history from its conception through prohibition to modern times. Of course no visit to a museum dedicated to alcohol would be complete without a tasting in the end, and in absinthe’s case, a with proper demonstration of the drinking ritual which involves placing a sugar cube on a pelle over a glass of the green and dripping cold water from a fountain on it until it dissolves.

Aside from the museum, what else you can find along the Absinthe Trail are over a dozen distillers who offer tours of their facilities (and of course more tastings!) – many of which who were responsible for keeping the absinthe tradition alive in the face of getting arrested aka bootleggers. In Môtiers I visited one such distillery, Absinthe Bovet, which was started by Willy Bovet during the prohibition period and got to meet his lovely daughter Françoise who educated me on how they go about making their award-winning blends.

She also very happily dropped me off at the entrance of the forest and sent me walking in the right direction for 15 minutes or so to find the local fontaines froides, Fontaine à Louis, which is essentially a natural cold water spring for people looking for drinking water or water to use to cloud the absinthe. The absinthe which is found directly next to it in a wooden box with plastic cups and a small donation box for those who want to hang with the Green Fairy in a spectacular setting. Really, you can’t make this stuff up…

Neuchâtel was a big Swiss surprise for me, mostly because I didn’t even know about it nor have I ever met anyone who has traveled there (not even my friends from Switzerland) which I find strange. There are so many cool things to see and do there and it is only an hour and a half from Basel or just a little over an hour from Geneva with a fast train. I guess in a country where beautiful lakes and mountains are every which way you turn, it’s easy for a place like Neuchâtel to get overlooked but I’m telling you you’re missing out if leave it off your Swiss itinerary.

Guide to Hiking & Horsing Around in Jyrgalan, Kyrgyzstan