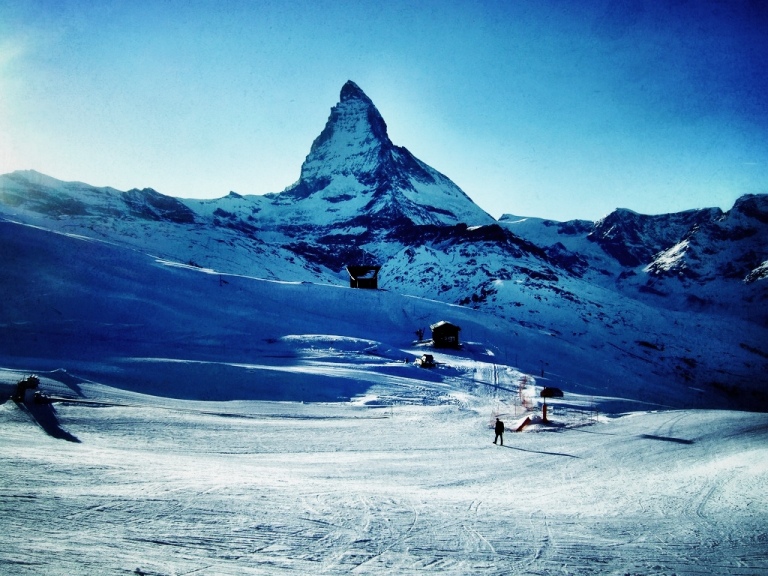 Having been raised in the shadow of Disneyland in Orange County, California, it shouldn’t come as a surprise that climbing the Matterhorn was something I had dreamed about doing my entire life. I mean, if Mickey and Minnie could pull it off, why couldn’t I?

For starters, I learned I would need to travel to Switzerland if I really wanted to follow this dream for that is where the real-life Matterhorn can be found. It’s about four hours east of Geneva and lies in the Penine Alps separating Switzerland and Italy. Zermatt, the alpine town most associated with the precarious peak, is where I ended up basing myself for the duration of my mission and ultimately set the bar way high for all future mountainous escapades I might find myself on. Talk about “walking in a winter wonderland”…

Vacationing in Zermatt is not cheap. Just getting there can be quite costly and accommodation, unless you are camping, is some of the priciest in the country. The only reason I was able to do this is because I saved up an entire semester for it and still lived with my parents around the time (which is a super cool thing to do, I might add).

A second class roundtrip ticket on the Matterhorn Gotthard Bahn from Geneva to Zermatt can cost anywhere from $100-$200 depending on the season and how far in advance you book. Cars aren’t allowed in the village so if you are thinking about driving, just know the closest you can get is Täsch and from there you’ll need to take a taxi or shuttle the final 7 km.

Not one for camping in sub-zero temperatures,  I ended up at staying at the Zermatt Youth Hostel which is just a short walk up from the center of town. I honestly don’t remember how much I ended up paying but on a search I just did right now there isn’t a bed cheaper than $50 a night in a 4-8 person dormitory. That includes dinner, but still, you’ve been warned – IT’S EXPENSIVE.

The Matterhorn was one of the last great peaks to be conquered during the golden age of alpinism in 1865. It’s not by any means the most difficult nor tallest to climb; it’s just the most hyped and probably has more stories than any other mountain in the Alps. The average time it takes to do the climb is 10 hours roundtrip but in 2007 two guys by the name of Simon Anthamatten and Michael Lerjen did it in just 2 hours and 33 minutes.

Photos nor words can describe what it felt like catching a glimpse of the Swiss Alps’ original bad boy for the very first time – it was like a dream or something. Very surreal for this Orange County girl, very.

As it turns out, climbing the Matterhorn/Monte Cervino/Mont Cervin  is some serious business. I don’t think Micky and Minnie knew how easy they had it over there in Anaheim with their measly 147 foot peak. The real deal is over 14,000 feet tall (14,692 to be exact) and on average around 12 people die trying to climb it each year. Maybe that’s because it’s estimated that only around one in 10 ascents are done with guides. You other 9 are straight up out of your minds.

In case you were getting curious, I actually never got around to climbing it myself. I just wanted to talk about it and give you some facts.

Zermatt is a real unique place and a great spot to go in Europe, especially if you are one for snow adventure holidays. Even if you don’t plan on doing any pricey mountain climbing (a guided Matterhorn climb costs upwards of $1200), it has some of the best winter/summer skiing in the Alps and tons of other cool things to keep yourself busy with in the most stunning setting imaginable.

I may not have climbed the Matterhorn in the end, but just hanging out underneath its magnificence for a few days was an unforgettable experience. Hope I can afford to get back there one of these days and who knows, maybe by then I will have acquired a passion for climbing and can officially join the ranks of those who have conquered the mountain.For now I am just satisfied with having done it metaphorically.

“All our dreams can come true, if we have the courage to pursue them.” – Walt Disney

Making Peace with Barcelona at One of Europe's Best Hostels