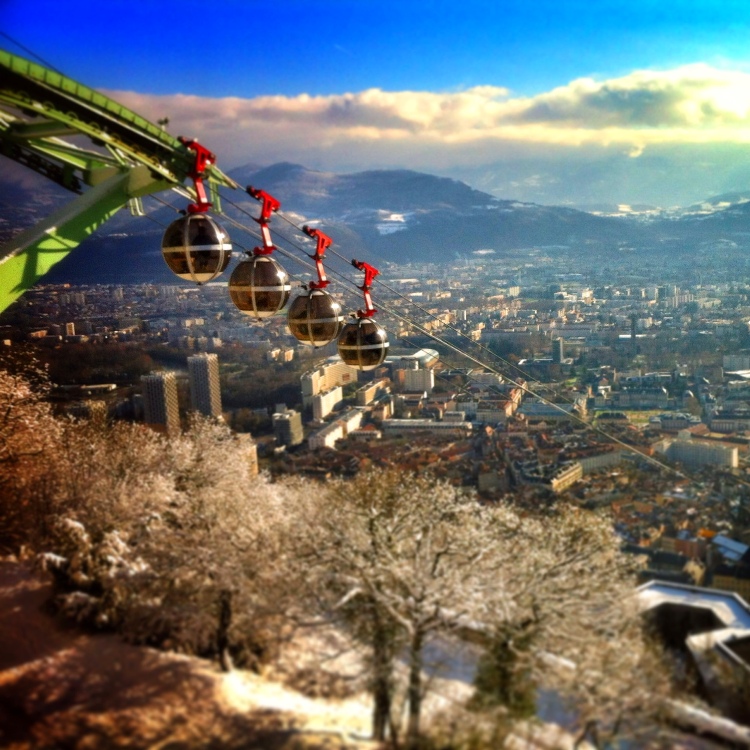 Three hours from Paris and an hour and a half from Lyon is the dynamic city of Grenoble – rhymes with Chernobyl, though I can assure you, the two look nothing alike. While it sits at the foot of three glorious mountain chains and is often referred to as “Capital of the Alps”, it is surprisingly the flattest city in France. This is partly what makes Grenoble one of the most populated cities in the Alpine region and also an excellent starting point for anyone interested in checking out the French Alps.

Though one can easily spend several days to several weeks here exploring the surrounding Vercors, Chartreuse, and Belledone mountains, the sights of the city itself are actually quite doable in just one or two days, depending on your interests. Here are just a few ideas on how to get the most out of a day in Grenoble.

A great way to start any big day of sightseeing is with a delicious meal which DiFérenT in the center of town is more than good for. Aside from having outstanding food (their Sunday brunch is out of this world!), the restaurant itself is also pretty unique. It doubles as space for exhibiting different artists’ work whether it be paintings, sculptures, drawings or photographs. It’s also in a great location, right across the street from Grenoble’s most popular covered market, les Halles Ste-Claire.

After you have stuffed yourself silly and are on the verge of falling deep into food coma, the best thing to do is hit the streets for a casual stroll around town to walk it off while getting acquainted with Grenoble. The center is very walkable and the author Stendhal was absolutely right when he said “A mountain at the end of every street” when describing his hometown.

If you are feeling really ambitious (or fat and in need of a bigger walking challenge), you should head over to de Bonne eco-district which is about a 15 minute walk from the very center where DiFérenT is. This colorful and conscientious little “community” was the first eco-district established in France and is at the forefront for all similar urban planning projects aimed at sustainable development.

Walk by the Stendhal Museum

Unless you have an undying thirst for all things Stendhal aka Henri Beyle, then I can honestly say you will be fine without going inside the new Stendhal Museum that recently opened in the center. You should know it is there though because Stendhal is Grenoble’s most famous resident and you’re probably going to hear something about him at least once or twice while in town. I’m still trying to figure out why this dude is so popular, even after sitting here for over an hour, but perhaps will never fully understand until I’ve read one of his novels.

Visit the Museum of Grenoble

If you like art, museums, and art museums, Grenoble is the place to be and one day will not be enough. There are quite a few cultural centers and museums (around 20 in total) where you can spend days, many of which have wonderful collections of art.

The Museum of Grenoble is most notable and considered one of Europe’s most impressive for its ancient and 20th Century works. Matisse, Warhol, Gaugin, Rubens, and Veronese are just a few famous artists represented. Oh yeah and this guy who unfortunately I did not catch the name of.

1500 works of art spread out over 65 different rooms – you can easily spend days just inside here, but if you are only interested in having a peak, an hour or two will be just fine.

Alright, by this point you will no doubt have started to feel a little sleepy and in need of a good pick-me-up for which there is a very simple solution. Head directly to Café de la Table Ronde, the oldest café in Grenoble and second oldest in France, for a coffee and/or shot of Chartreuse.

Whether it is mid-afternoon and at this place or not, you do have to make sure you drink some Chartreuse before you leave Grenoble. It’s a potent herbal 55% liquor that is not tasty at all, but the fact that only two people in the world know the recipe for it (two Carthusian mountain-dwelling monks) makes it special and an experience unto itself.

Ride “the bubbles” up to the Bastille

The best part of any visit to Grenoble has to be taking a ride up to the Bastille fort in these adorable little cable car “bubbles”.

There are several viewing areas once you reach the top and if you are up for it, you can hike even further into the mountains. If you’re anything like me though, you will be content with just checking out views of the city below and Mont Blanc in the distance if it’s a clear day from the viewing platforms or restaurant/bar.

Wherever you end up for dinner at the end of the day, you should see to it that they have Gratin de Crozet on the menu. I happened to try this Rhône-Alpes deliciousness at the city’s annual Christmas market (which goes November 24th-December 24th) out of a dish that looked like it came from a microwave meal. A bit hesitant at first, I can honestly say it’s probably one of the best things I’ve ever eaten. The only way I can describe it is like creamier baked macaroni and cheese made with gourmet French cheese and mixed with a filling of your choice like truffles, foie gras, escargot, crayfish. I got the crayfish and it was cray, like magnifique!

Merci beaucoup to Rhône-Alpes Tourisme, Magellan PR, and Grenoble Tourisme for showing me around the wonderful town of Grenoble. While this was part of a sponsored press trip to Rhône-Alpes, all opinions expressed here are my own (they always are – don’t you know me by now?)