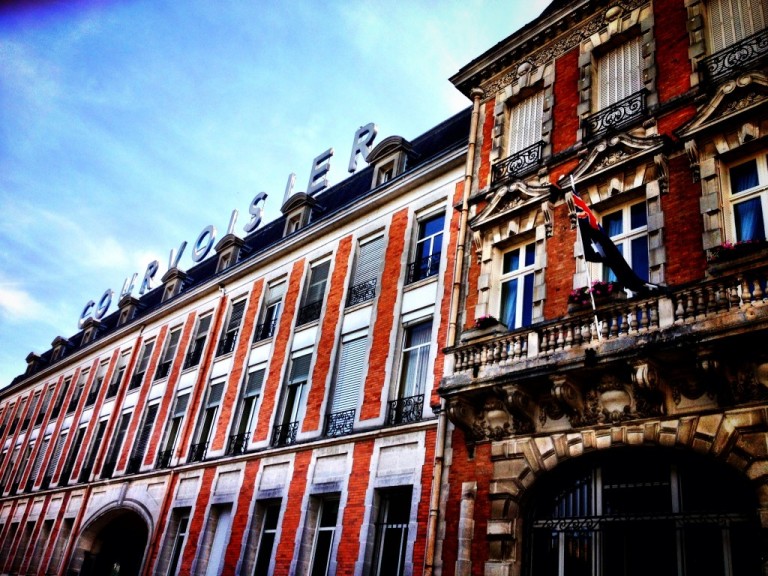 I had such a grand time in Jarnac at the Courvoisier Chateau that it warrants its own blog post rather than for me to clump it together with something else. It really was an experience more than a tour.

Here is where I try to break it down in order to give you a little virtual taste and at the same time blow you away with my new-found knowledge of all things Courvoisier and cognac. Jarnac is only 20 km from Angoulême and 10 km from the town of Cognac, pretty much smack dab in the middle of Poitou Charentes, so very accessible. The town is most famous for its association with Courvoisier but randomly it is also where François Mitterand was born for all you Francophiles/EU enthusiasts out there…

Our tour started out with a bang in the reception of the Courvoisier Chateau with a round of Courvoisier Exclusif and tonic. Courvoisier Exclusif is considered the world’s first “mixable” cognac which I appreciate because that means it was created with cocktails in mind (huge fan of cocktails, I am). They use a different blend for this one that gives more depth and complexity allowing it to pair better with mixers. The bottle is even specially shaped so that it fits in with all the other bottles at the bar (think vodka, rum, whiskey).

After cocktails we were led into the museum area where we learned some of the history behind Courvoisier, what sets it apart from other brands, and what exactly is ‘cognac’. The history part was the most interesting to me since I am a fan of history and had no idea what a huge role Courvoisier played in the Napoleonic Wars.

Ok, maybe not huge, but it is true that Napoleon started giving a ration of cognac to troops in his artillery to lift their morale during this time. It’s also true that he paid a visit to the Courvoisier cellars in 1811 (though the brand wasn’t officially established at that point) which is what sparked its lifelong association with the Emperor. If you’ve never noticed (like me), Courvoisier’s logo is the silhouette of Napoleon and “Le Cognac de Napoleon” even written on the label. Interestingly, the shape of some of its bottles was also inspired by Napoleon, or more specifically, the curves of his wife Josephine.

As for what makes Courvoisier different from all the other premium cognac brands, well first and foremost it has its own rap song.

I’m kidding, but you bet I inquired about their connection with Busta Rhymes. Our guide kind of laughed this off and explained that Courvoisier has never had anything to do with the creation or promotion of “Pass the Courvoisier”, Part I or Part II, nor do they sponsor anyone in the hip hop scene. I wouldn’t sponsor any of those guys either as they clearly have plenty of money to throw at expensive bottles and they drink it all wrong anyway.

BLOGGERS on the other hand…let’s just say I’d be more than obliged to have Courvoisier as my official drink of choice as I blog my way around the universe ;)

Now, take a look at that soil above. This, my friends, is part of what makes cognac cognac. You can notice it is pretty chalky which greatly impacts the taste. Chalk, clay and limestone are all found in subsoil around the area which is even classified into 6 different growing regions. Courvoisier only uses the inner four (see map below) which is one thing that sets them apart from other cognac manufacturers. These growing regions are also the explanation for what makes cognac cognac. Similar to champagne, cognac is a brandy, but not every brandy is a cognac. Has to come from here.

Another thing that sets Courvoisier apart is related to where they get their eau-de-vie from. Rather than have their own vineyard holdings like the others, they have contracts with over 1,000 different wine making families that they get the juice from. Think about all the diversity there in which they can choose to make their blends. Pretty, pretty clever if you ask me.

After the history and production lessons they take you into an adjoining cellar where some of the magic occurs. Over a period of 10 to 20 years in these special casks. I say special because all the wood they are made from is hand chosen by the Master Blender. It’s an important task as the type of wood in which it is stored also affects the taste.

Unfortunately the Master Blender was not present during our tour, I would have really liked to shake his hand…

After a brief look there and 3D film on Courvoisier and its production, we were then led over to this rustic storehouse for some more tasting. This time some Napoleon marque while overlooking the Charente.

The coolest part of the tour came next and that was a visit up to one of the top floors of the chateau for Le Nez de Courvoisier, the sensory experience. Like a scene out of Eyes Wide Shut if it were set in the 80s, we were all blindfolded and seated around a suspicious mirrored table to not only taste our glass of XO Imperial, but to smell and hear it as well. Say whaaat? I know, sounds strange, but these guys know what they are doing.

Kash, Laurel & Sandrine also knew what they were doing…

I, on the other hand, did not know what I was doing

By pairing different scents with different music and the best macaroons you will ever have in your entire life, you literally taste the different the flavors that are contained in a single glass, one-by-one. Orange. Violet. Vanilla. It’s glorious.

As if all that we had seen and tried was not enough, our last stop brought us down to their cellar for the grand finale. Down there is where they store the VIBs (very important bottles) and where we got to taste the Courvoisier Initiale. I’m not even going to post photos, want to leave a little air of mystery..

Well OK, maybe just one. Of Ian Mallory and I getting crunk.

I’ve been on quite a few spirit tours in my day (both formal and self-guided), but the Courvoisier Experience is hands down the best one I’ve done yet. I just loved how interactive it all was and of course exposing my palate to such premium cognac. There’s a handful of other cognac producers you can pay a visit to while in the region, but I’d say that if you only had to choose one, Courvoisier is the classiest way to go.

Huge thanks and cheers to Courvoisier for showing us a lovely afternoon and to Sandrine from Visit Poitou Charente, Sue from Magellen PR, Ka$h the Budget Traveller, Laurel from Monkeys & Mountains, and Ian from Mallory on Travel for being such awesome drinking buddies.