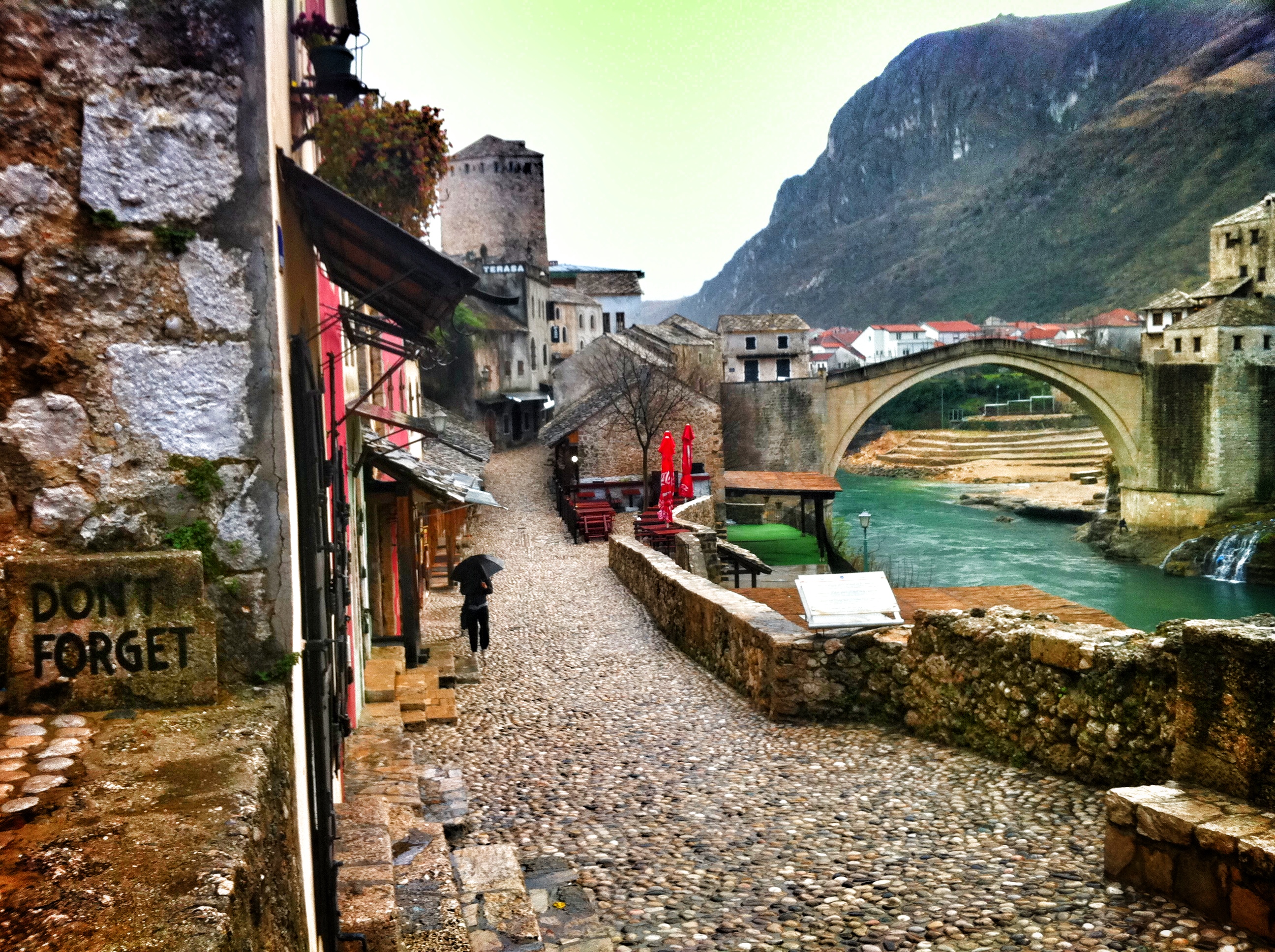 You should always know you’re in for a challenge when you travel off-season, but never, and I repeat, NEVER, let that deter you from doing so. I’ve talked before about the benefits of traveling during winter in Central Europe and now I’ve got some good news about off-season travel through the Balkans. My shining example of this comes in the form of one of the most visited spots in the entire region and that is Mostar in March.

While traveling between Belgrade and Sarajevo proved to be time consuming and difficult, traveling between Sarajevo and Mostar was incredibly easy by bus so I decided to go for a night. It takes just a couple of hours and there are several going throughout the day. Mostar is also a pretty popular destination for organized tour groups coming from Croatia; I almost took one there myself in 2007 while I was in Dubrovnik, but so glad I didn’t in the end. Large coach tours are usually pretty annoying and I also wouldn’t be telling this story.

I arrived into town much later than I had hoped for, but that’s what happens sometimes when there’s too much rakija in the mix the night before. A little mad at myself since the sun was well on its way down and I was going to leave fairly early the next morning, I ran to the hostel I had booked to drop off my stuff and headed straight to the Old Town.

As I walked in what I thought was the general direction of the Old Town, I started getting worried that maybe I was going the wrong way since I didn’t see any other tourists around. Was I even in the right city? I just kept walking and walking until I finally realized I was standing in the middle of one of the most famous bridges in the entire world…ALONE.

Mostar’s Old Town is one of the most recognizable images from Bosnia and Herzegovina (it’s in Herzegovina, btw…). Even if you haven’t heard of the city, you’d probably recognize its iconic Stari Most, or “old bridge”. There is an incredible amount of history behind it and it also happens to be a pretty famous dive spot. One of the best in the world apart from Acapulco, Mexico.

Now, if you’ve ever looked into visiting Mostar or have seen photos then you know the chances of having such a “gem” all to yourself are pretty slim unless it’s during the dead of winter. Or apparently just a late afternoon/early evening in mid-March…

If you’d like to read a bit more about the history of the bridge from its origins to its destruction during the Balkan War in the 90s and subsequent restoration, head on over to this page. This is a story I’m not even going to attempt to summarize and I am also not looking for anyone else to do it on here either (read: no politcal comments, please). Bottom line is that it’s a really beautiful spot worth visiting if you are ever in the area and for more than a couple of hours if you really want to get a feel for the place. None of this day trip business.

Clearly it’s also worth visiting off-season if large crowds aren’t your thing. Although all the shops were closed and I missed the sexy diver dudes in speedos who are prominent in the middle of summer, the fact that I got one of Europe’s most famous (and most controversial) UNESCO World Heritage sites to myself that day? Unforgettable.