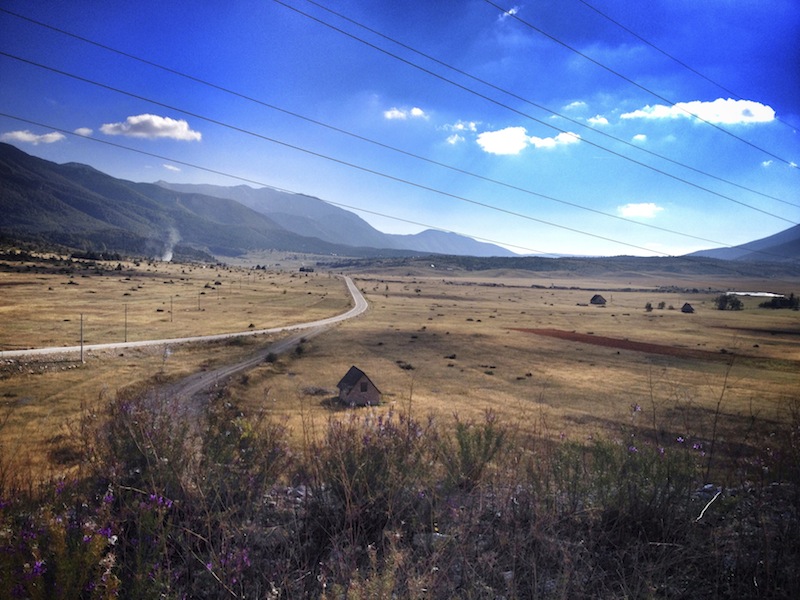 Just to catch you up to speed, in case you haven’t read the news, I am currently hiking/trekking/rock climbing/bicycling/rafting/driving/walking Via Dinarica which is a proposed mega trail extending from Albania to Slovenia along the Dinaric Alps.

Forget I said proposed. Via Dinarica exists naturally, the mission is to get it connected naturally as well and ready for its touristic “close-up”, so to speak. As one of the last wilderness frontiers in Europe (the Carpathians in Ukraine are the only other contender), there is so much potential for eco-tourism in this region, it’s unreal, and at the moment what is being done to facilitate this is a three month trip through the entire length of the trail to take notes and make local connections. Where are there improvements that need to be made and who along the way wants to join this sustainable Western Balkan tourism party? It’s all being worked out.

I’m traveling around with some pretty awesome people who I feel lucky to have become acquainted with. Kenan Mufic, captain of this Via Dinarica trip ship; Elma Okic, the talented photographer and videographer in charge of capturing it all; and Benjamin “Benjo” Mujkic, our driver/fixer/entertainer/moral supportist. Read about them, they are seriously amazing. All have been on the trail since Day 1 from Albania and will finish in Slovenia. Aside from being really great people, they are all so, so knowledgable about everything it seems so I’m really learning quite a lot and having a hell of a good time, I might add.

Without further delay, here’s a look at the first half of my Via Dinarica journey through Bosnia & Herzegovina.

In an effort to beat my jet lag at its own game (not), I agreed upon a 7 hour, 1,700 meter (~5,600 feet) hike to Vilinac at the top of Crvsnica Mountain the day, the highest mountain in Herzegovina, after I arrived in Bosnia from California.

Starting in the valley of Diva Grabovica, about a 15 minute drive from Jablanica, we made our way towards the mountain and it was just below the first resting point at Bivak pod V. Kukom where we learned of a stranded hiker in serious need of some help. Since Kenan is basically a Bosnian version of Bear Grylis from Man vs. Wild slash super hero, there was no way we would be continuing on until this man was brought to safety.

Two and a half hours later and with the help of another local legend, Faruk “Braco” Zahirovic, who also happened to be hiking there that day, they returned to the mountain hut where we were waiting with the guy who was clearly a little shaken, but also incredibly grateful for the help. After a few sips of rakija with them and the rescue team(s) that eventually showed up, we were on our way again.

Since we were running almost three hours behind, we decided pretty quickly that we wouldn’t be making it up to Vilinac unless we wanted to be hiking in the dark and with this lil’ rookie here, that wasn’t really an option given that I was struggling even in the daylight. Apparently there was a closer hut 2.5 hours away called Tise (1,380m) that “wasn’t as nice”, but at that point it didn’t matter, so that’s where we headed.

This was a pretty tough undertaking for me, I’m not going to lie. For my first serious hike ever, it was way more physically demanding than I had anticipated and there were points where I know my mom would have killed me had she seen how far up I was clinging to the side of a mountain with just a harness there to decide my fate.

By the end, I was really ready to punch someone in the face, anyone or anything, as it felt like we had been walking for 2.5 days, not hours, but once we finally arrived to Tise, all of that was forgotten. Although it may not be in as great of shape as Vilinac, Tise was a really special place to call it a night. It may not look all that grand since it’s in a bit of disrepair, but it was actually built in the early part of the 20th Century as a hunting lodge for King Alexander Karadjordjevic, former king of Yugoslavia.

Waking up the next morning with the mountain all to ourselves made that grueling hike all the more justifiable. Not even justifiable, but actually a privilege. Clearly there is a reason these mountains have taken on the nickname “Herzegovina Himalaya”.

After coming down from Crvsnica, we were off to Blidinje Nature Park which is located just on the other side of the mountain from Diva Grabovica. Kenan and Elma ending up hiking there from Tise because they are hardcore like that, but I got a ride which gave me a chance to get a better look at Jablanica, a town with some pretty interesting WW2 history, and the surrounding area. Just gorgeous.

Pulling up to the entrance, I was shocked to see such a dramatic change in scenery from where we had just been. Green mountains turned to a quaint grassy plain. Reminded me of some parts of California in a weird way.

There’s not a whole lot going in the nature park, just a really cute hotel called Hajdučke Vrleti (actually its own “republic”), Blidinje Lake – the largest natural lake in Bosnia, and a few important religious sites that believers go out of their way to see. The first being Masna Luka, a forest-covered (and very modern) Franciscan monastery that was here before the area was even designated a nature park. It was Stjepan fra Petar Krasic, the main monk in charge, who actually pushed to make Blidinje what it is today.

And finally a monument to Diva Grabovčeva.

Finding the source of the Vrbas

From Blidinje we moved onwards toward the Vrbas Valley to try and find the source of the Vrbas, one of the most important rivers in Bosnia.

We snaked our way through what seemed to be quite a flourishing little region with lots of farms and friendly locals until we finally made it to the end of the road. Behold, the source of the Vrbas..

Quite unassuming for such a big river and such a cool place to just sit back and reflect on all we had just done. And where we were about to go…

Via Dinarica has been made possible by the generous support of USAID and UNDP BiH.