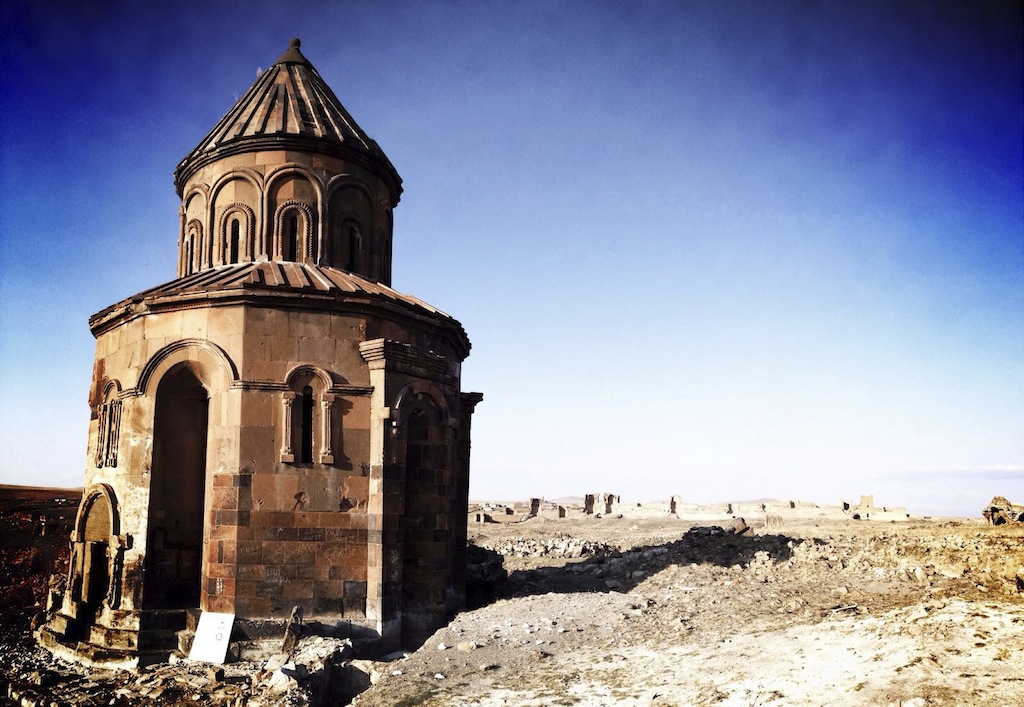 I had great aspirations to write a novel or something of that nature from the backseat of Nancy on the 4000 km road trip Yomadic and I did from Sarajevo to Tbilisi, but that was a pretty stupid idea. Way too many cool things going on outside the window and in my mind. Someday…

One thing I did did manage to throw together though during the less interesting parts (and whilst trying to avoid paying attention to the out of control drivers Nate was dealing with on the road) was this little cinematic ditty. A visual voyage to the ancient Armenian capital of Ani that now rests its ruins just 40 km east of Kars, Turkey, and just a stone’s throw away from the present border of Armenia which has been closed since 1993.

For the record, Ani was 100% worth going out of the way for us (our original plan was to enter Georgia via the north coast of Turkey) and I would definitely vouch for it as a sight to see if you are into history, ruins, and atypical travel experiences. It’s one of those places that most people have never heard of, yet it’s incredibly significant. We’re talking an ancient capital city and cultural center once on par with Constantinople, Baghdad and Damascus. Today it’s one of the most endangered heritage sites in the world, mostly due to neglect and vandalism. It is after all a sacred Armenian site surrounded by Turkish borders…

How do you get there? Kars is one of those places that you don’t just end up in, but it isn’t all that far if you are hanging out over in Batumi, Georgia or Trabzon on Turkey’s Black Sea coast. Driving east from Cappadocia, we stopped and slept in 2 different cities on the way (Zara and Erzurum) after driving at least 4 hours a day if that gives you a good idea of just how far it is from some of the more touristed parts of Turkey. Overnight buses work too, but they just suck. Flying from Istanbul or Ankara is the fastest and most convenient option, but it can also be the priciest. From the city of Kars itself, it’s about 40km out to Ani and a piece of cake if you have your own car – it’s a straight shot. If you don’t have your own car, you will need to hire a taxi and according to Wikipedia, it costs 100 Lira for a 5 hour trip which is about $50.

How should I do it? On your own. Please don’t go with a Turkish tour guide or company unless you are 100% sure they are going to present you with unbiased information about what actually went down there. Just don’t…

How much does it cost? I forgot. But less than $5 for sure to have a coffee at the nearby “cafe” and get inside.

How much time do I need? If you are a photographer, filmmaker, or just slow, I’d give yourself at least 3 hours to walk the grounds. Otherwise, an hour or two will probably be just fine.

Bled, Slovenia is Amazing....But See Why Bohinj is Even Better