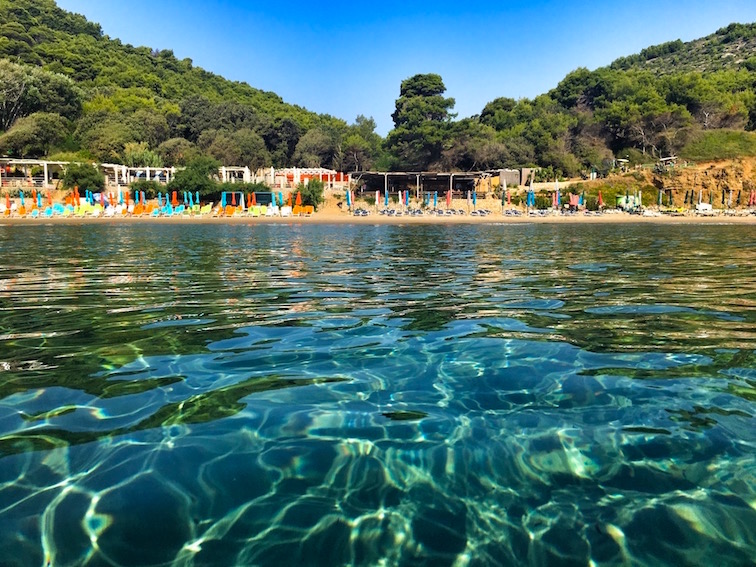 In my never-ending quest to discover the best of Dubrovnik and find just as much to do outside of the Old Town as within, I recently headed back to Croatia to see how things were developing on the Via Dinarica Blue Trail which hugs most of the coastline along the Dubrovnik Riviera and includes the Elaphiti Islands.

I don’t know whose map this is, but thank you for letting me use it

Just to refresh our memory, the Via Dinarica is a massive trail that was established a few years back as a means to connect local communities and businesses working with tourism, hospitality, agriculture and cultural heritage along the Dinaric Alps which extend from Slovenia to Albania. There are three main trails – the Green Trail (the most inland route along the lower mountains which passes mostly through conifer forests), the Blue Trail (the coastal route which passes along the Adriatic Sea) and the White Trail (the middle and main route which follows along the highest peaks of the Dinaric Alps). While I have done my fair share of the White Trail over the years, it’s the Blue Trail that I was always the most attracted to seeing as it’s the closest one to the beach. Sorry, not sorry for being a California girl.

With Dubrovnik as my main starting point, I decided to stay overnight inside the Old Town as I only had 24 hours to spend and the last time I was in town I bypassed it to sleep along the Dubrovnik Riviera in Srebreno/Mlini. Just as I had suspected, it was crazy crowded since it was mid-July and the Dubrovnik Summer Festival was in full force with all kinds of exhibitions, musical performances, and theatre performances scheduled. The festival, which started back in the 1950s and is known to be one of the top cultural festivals in Europe, is held every year from July 10-August 25 so always expect this time to be one of the busiest.

Since I had already seen most of the main sights and wasn’t in the mood to dodge 9,000 tourists, I headed outside Pile Gate to check something new – Lovrijenac – the fort on the cliff just northwest of the Old Town which dates back to the 11th century but was completed in the 16th century. Entrance is included in your ticket to the Old Town walls or you can buy it separately if that’s all you want to see. Don’t miss the inscription above the entrance that reads non bene pro toto libertas venditur auro. This was the motto of the Republic of Ragusa and basically means “freedom is not to be sold for all the treasures in the world”. I couldn’t agree more. From the top there are amazing views of the Old Town, Mt. Srđ, the island of Lokrum, and the Elaphiti Islands towards the north – my next destination.

The Elaphiti/Elafiti Islands are an extremely popular day trip away from Dubrovnik but I was about to go a little deeper. Their name comes from the ancient Greek word for deer, apparently due to their shape somewhat resembling the head, neck, and body of a deer from what I was told by a tour guide, though other sources claim that it’s also because a ton of them used to roam around the islands before tourists were invented.

In Gruž Harbor you will see quite a few companies offering “Elaphiti Islands & Fish Picnic” excursions for the day or you can attempt to orchestrate your own via the public ferries. I was torn between which way I was going to do it – DIY or kitschy – but in the end I gave in to the allure of sailing away in a seriously sexy replica Karaka ship from the 16th century and the promise of a breakfast rakija plus full bar available to me the entire time.

The price for the tour I took cost me 59 euros which is not a bad deal considering you get to see all of the islands in eight hours without the hassle of calculating schedules/cost of ferry tickets and as well enjoy a delicious lunch at sea that could cost you a little less than half of that if you were to order the same in a local restaurant. Most tour companies should be flexible if you decide you’d like to take your luggage and stay on one of the islands rather than return back to Dubrovnik which is exactly what I did in the end.

There are three inhabited islands included in the chain and the first everyone usually visits on these excursions (and the smallest) is Koločep, just 20 minutes away. Incidentally, it’s also the shortest visit as it’s really quite small – less than a square mile – and there isn’t much to see except a couple of churches left by some Croatian kings and the nature. If you do end up staying longer, there is apparently a Blue Cave on the south side you can swim up to and several hidden coves where you can spend some time. Koločep is historically significant in that it was an important shipbuilding site under the Republic of Ragusa.

Thirty minutes further north from Koločep is the Elaphites’ largest island, Šipan. At about 6 square miles, it’s the only island that has a proper road and allows cars and a bus although biking around seems like it could be a way more interesting option. There are two main villages – Šipanska Luka and Suđurađ – but most excursion boats dock in the latter for a little over an hour giving you too little time to do anything except maybe have a swim, do some wine or olive oil tasting with locals in their home, or take a short walk to see the endless sprawl of olive trees and vineyards in its interior valley. According to a local I was chatting with, Šipan has the largest number of oil trees in the world for an island though I haven’t been able to verify that fact yet.

Aside from its wine and olive oil, the main thing Šipan is known for is that it was once the premier hideaway for Dubrovnik’s rich and famous as it’s the furthest island out and therefore less likely to come under attack by the Venetians and Ottomans. Back in the 15th century, many sea captains and aristocrats built palaces and villas on the island which you will notice though I don’t think many or any at all are actually open to the public. Still beautiful to admire from the outside and imagine how it must have been to be a Ragusa baller…

Our final stop, and my port of call, was the middle island of Lopud. It’s not as large as Šipan – less than 2 square miles – but it is the most developed in terms of tourism infrastructure with quite a few accommodation options and larger selection of restaurants and cafes. I opted to stay at a small guest house in the hills and to my delight it turned out that the lady who owned it also worked at the Tourism Information office so upon disembarking from my galleon I headed straight there to meet her and get a small brief on what I should expect for my next 24 hours of island life.

This was basically nothing. Chill, chill and chill was her best advice and for sure that was exactly what I was hoping for. Lopud was also an island of captains in the days of Ragusa and at one point the population hovered around 1,000. Now, it’s around 200 and super sleepy to say the least, so a perfect little hideaway for anyone wanting a low-key holiday.

There are remnants of some 36 churches, mostly dating back to the 15th and 16th century, as well as a Franciscan monastery which unfortunately at present is closed to the public. After I settled in and had a couple glasses along the main promenade, I decided to go for a stroll to check the Your Black Horizon installation and then sunset hike towards Fort Kaštio (Tvrdava Kaštio) which I spotted earlier on top of the hill.

Realizing that I was wearing a dress with flip flops and therefore probably not in the best position to be climbing into the wild to reach the fort, I ended up just following the signs towards a vidikovac (lookout point) instead and watching the sun sink behind Šipan from just below the ruins of St. John’s Chapel. Secluded and spectacular, it was a perfect way to end the day.

The next morning I woke up bright and early to get over to Lopud’s greatest attraction: Šunj Beach. It is known to be one of the best beaches in Dalmatia and pretty much where most of the day trippers head once they get off their excursion boats so for that reason I made it a point to arrive around 8am so it could be just me and the sea for at least an hour. From town, it’s about a 20 minute walk straight through the middle of the island or you can catch one of the golf cart taxis you will periodically see zipping by for a few euros.

Šunj is special because unlike a majority of the beaches in Croatia which are full of pebbles, rocks, and sea urchins, it’s a shallow bay that is all sand. Without a doubt this place gets super packed in the afternoons and early evening, but that morning I literally had it all to myself minus a few nude grannies swimming their morning laps and it was absolutely glorious.

Though the time went by way too fast and I needed to carry on wayward to Bosnia & Herzegovina, I really enjoyed experiencing yet another side of Dubrovnik’s tourism scene and exploring the nearby Elaphiti Islands which I always saw, but never touched. Definitely a more laid back alternative for anyone who is keen to check out Croatia’s most popular tourist destination but would rather spend the night and the rest of their time living the island life closer to nature.

Connecting naturally, Via Dinarica style…has anyone ever split their time between Dubrovnik and the Elaphites?

The project “Sustainable tourist development – From Herzegovina trails to Dubrovnik Elaphiti islands“  is financed by the European Union under the IPA CBC Programme Croatia – Bosnia and Herzegovina 2007 – 2013.