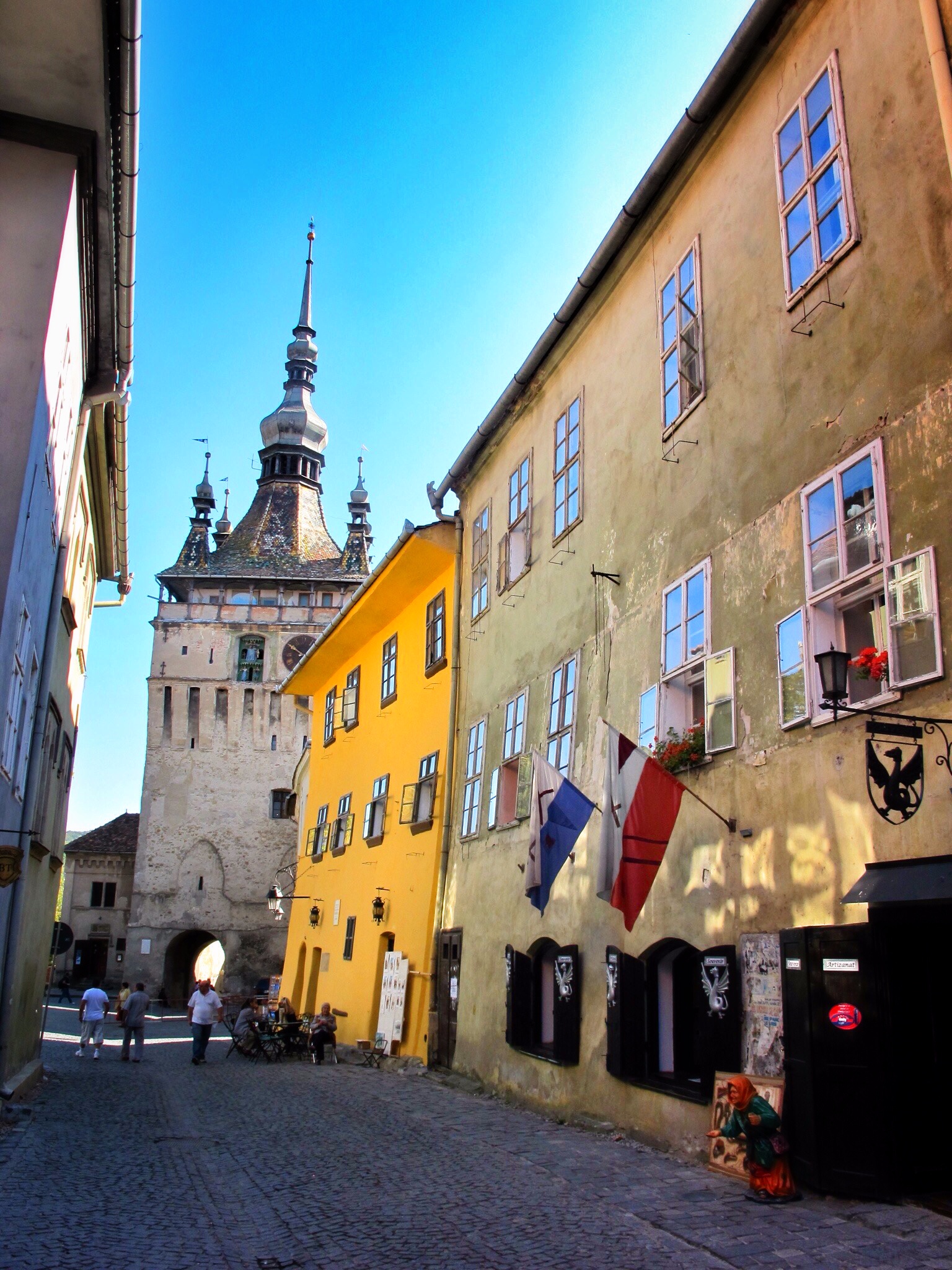 It was a toss up between going to Sibiu or to Sighisoara on my next “big day out” from Brasov. I really wanted to go to Sibiu because it was a European Capital of Culture in 2007, and well, as a European Studies student these things matter to me. I also heard there was much more to see there which now I realize is probably true. Probably.

On the other hand, Sighisoara also sounded cool. It is one of the best preserved medieval cities in Europe and listed as a UNESCO World Heritage Site. PLUS, they say it’s where Dracula was born so…maybe he would be there? Anyway, still undecided when I woke up that morning, I flipped a coin and Sighisoara it was.

This turned out to be a fateful coin toss, but I will get to that soon enough. Let me just tell you a little about Sighisoara, or Sighişoara, if you want to get all fancy.

It is a tiny, tiny little medieval town with streets that look like candy. The pastel colors and architecture were blowing my mind; the quaintness of the place made me really feel like I was “back in time several hundred years”. Had I been there with a nice gentleman, perhaps I’d even go so far as to say it was romantic.

Unfortunately, I was not with a nice gentleman, and unfortunately, its charm didn’t cover up enough the fact that pretty much…Sighisoara is boring as hell. Like, there was nothing going on. No energy. Even Dracula was bored out of his mind.

Perhaps had I been there at the same time as the bus loads of tour groups that usually come through in the busy season, I’d be singing a different tune. Probably an angry tune because too many people crammed into a place like that can also be annoying (I’m thinking Charles Bridge style in Prague on a hot, July afternoon). I guess I was just hoping for a little more action.

Don’t get me wrong, I am really glad that I went to Sighisoara. It is as cute as little medieval towns come, you can see for yourself. I was just a little disappointed that after about an hour I felt like I had done everything that could be done, yet I spent over two hours  just to get out there. The ride out was totally comfortable, there was nice scenery, and I had some pretty sweet locals on my bus, but it just felt like too much time wasted on public transport.

So, with that said, if I were able to do it again and had a larger budget I think the best scenario would have been to rent an ox cart or a horse to get there instead.

I’m not entirely sure this is even possible, but if it is not, then I would also settle for a car. The countryside around there is gorgeous and I’m sure there are a handful of other interesting places you could stop at along the way. Maybe even hang out with farmers.

So, just to summarize…Sighisoara was lovely. I’m glad I went. If you’re going to go, think about renting a car, or an animal. And finally, if I didn’t go to Sighisoara that day, I wouldn’t have been in the right place at the right time to accept an invitation that turned out to be the most memorable and incredible experience of my entire trip to Romania (more on that another time).

A Story About Studying in Sweden