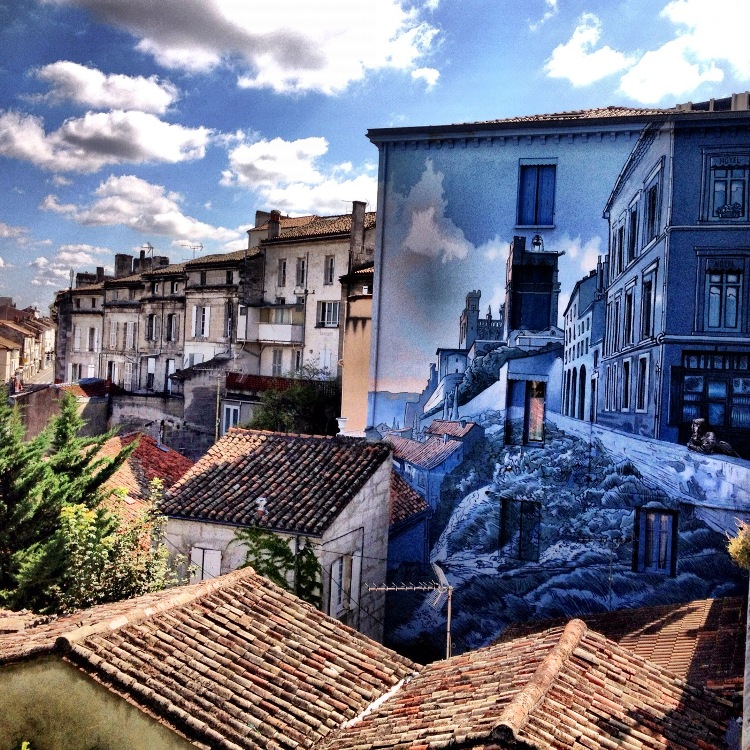 In early September I announced that I was going to Poitou Charentes and I am finally ready to unveil the first half of this #epic trip which took me to Poitiers and Angoulême.

Poitou Charentes is in the southwestern part of France and made up of the four distinct counties of Deux-Sevres, Vienne, Charente and Charente-Maritime. Getting there is easy – there are now quite a few low costs flights to La Rochelle, Poitiers and even Bordeaux (not in the region itself, but close). A train can get you there from most other French cities as well – I ended up catching one from Paris that took only about an hour and a half.

Even if you don’t think you know anything about this area, trust me, you do. It’s Cognac Country, baby! Over 1 billion Euros of cognac is exported from here into glasses/challises/pimp cups around the world every single year. Quite impressive for a region of a little less than 10,000 square miles, no? You do the math.

Our aptly titled #epicCognac trip commenced in the capital of the region, Poitiers. It’s a pretty famous university town – Université de Poitiers is one of the oldest in Europe actually, established in 1431. Nearly 1/4 of its residents are students giving it a pretty youthful vibe. It’s also known as the “town of one hundred steeples” as it is extremely rich in Romanesque monuments and architecture from the 11th and 12th centuries.

We were guests of the Hotel Mercure Poitiers Centre for the first night which was an awesome place to stay since it in many ways embodies the city of Poitiers itself. Recently opened in June 2012, the building is a former Jesuit chapel that has been converted into a four star hotel. Historical features of the building can be seen from both inside and out, and at the same time boasts a contemporary interior design. Not much different than the city center it sits in.

Dinner the first night was at a cozy little restaurant called Le Bistrout du Boucher and is where my downward dietary spiral began. I was from this point forward where my unhealthy addiction to Magret de canard began to take shape and as a result, you won’t find me talking about many other meals since it’s what I ordered pretty much every night for the entire trip. For real.

Look at this photo and tell me it doesn’t make your mouth water (assuming you are not a vegetarian). Truthfully right now it is making my eyes water…I miss it so much.

The following day we headed to Angoulême, another important spot in the region about 115 kilometers away. WHAT a pleasant surprise. Once notable for its production of paper, its main claim to fame now is as the city of images and comics. You will know you have arrived once you start seeing street signs in the shape of cartoon bubbles and comic art splashed across buildings.

In total, twenty different wall paintings are scattered throughout the city. Annotated maps are available at the tourist office that provide three self-guided routes covering the heart of the town, the area within the ramparts, and the district bordering the river.

While we were there we also had time to visit to the Musée de la bande dessinée that lies down on the banks of the Charente. Here you can check out some 8,000+ original drawings (not all at once, exhibits are changed 3 times a year), learn about the history of the art form, or just chill and look at comic books for a while. That’s what I did.

Architecturally, Angoulême could be anywhere in the country, really. The city’s huge focus on preserving this cultural heritage sets it apart though like nothing else and gives it such a jovial, light-hearted feel that I can’t describe making it one of the most unique cities in France in my opinion. I’d imagine it would be such a cool place to grow up in or even just visit as a kid.

Angoulême was definitely one of my favorite stops on the trip and I’d definitely like to visit again at some point, one day was not enough. Seems like they always have a lot of cultural stuff going on including a huge comic strip festival every year towards the end of January. Could be a cool time to try and return!

Huge thanks to Sandrine from Visit Poitou Charente for showing this gypsy around these parts and and to Sue from Magellen PR, Ka$h the Budget Traveller, Laurel from Monkeys & Mountains, and Ian from Mallory on Travel for being such awesome travel companions. Stay tuned for the second (and more boozy) installment of our #epicCognac adventure…