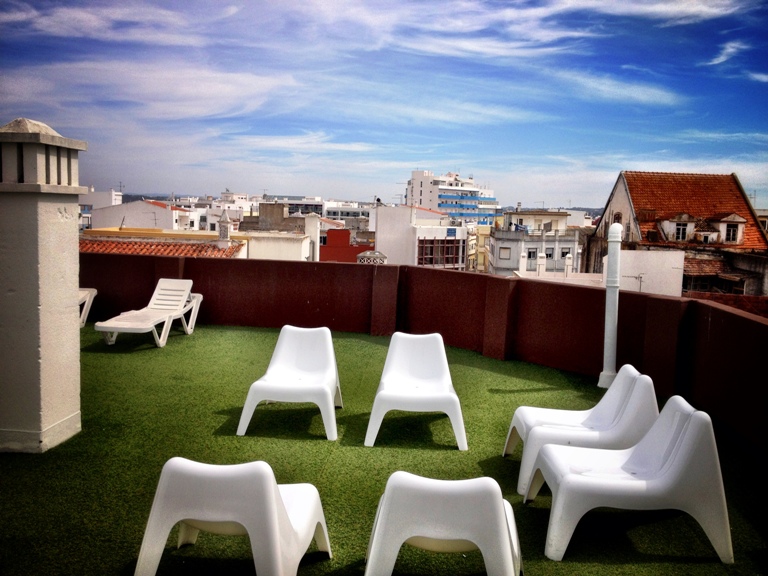 The title of this post may be a little confusing to some so just to clear things up – I did not meet a man in Portimão by the name of Roomorama. What an awesome story that would have been.

No, actually this gypsy is one of the lucky ones who had the opportunity to work with Roomorama, a company that offers quality room and apartment rentals around the world for the discerning traveler. This is why I ended up hightailing it out of Faro – I had a sweet accommodation set up waiting for me in Portimão!

When the Roomorama sponsorship offer came up I was really excited because I’ve always wanted to try this type of service out. As an avid Couchsurfer, I love the experience of living with and like a local while traveling. Roomorama takes the concept to a completely different and more private level by giving travelers the opportunity to rent entire apartments out for themselves; sometimes directly from locals and sometimes through apartment rental services.

Roomorama’s search engine also proved to be a pretty powerful tool for helping me decide where I should be based in southern Portugal. I was flying into Faro and knew I wanted to stay somewhere more towards the west for the five nights I was going to spend there, but where exactly that would be I didn’t know since I was completely unfamiliar with the area.

Then I noticed I had the ability to search by region. Rather than having to check availability in all the various cities separately, I was able to just type in “Algarve, Portugal” for location and it pulled up all listings from the Spanish border to Sagres. I could then go into “Map View” and check out all the places in the general area I knew I wanted to be. This ultimately helped me determine that I should stay in either Albufeira, Portimão or Lagos.

There was just one tiny problem…

I knew I was experimenting with this in Portugal and to be quite honest was incredibly apprehensive about renting an apartment in any country where Will Peach has done the same. I can deal with sleeping in a stranger’s bed for a few days ( I know Adventurous Kate is not a fan), but NOBODY wants to stay in a place fearful of who or what might have been touching the small collection of books stacked on its shelf or any other innocent piece of furniture in there for that matter. Luckily I didn’t have to fret over this for too long as my initial search on the site yielded not only apartments, but a couple different hotel room options as well. Whew!

Next it came down to selecting my desired amenities. This is where I decided to unleash the “discerning traveler” in me. After spending several days in one of the best hostels in Portugal, I knew I wouldn’t be satisfied settling for just any bed and a door that locks. Absolutely not. I needed the works and for me that meant bed linen and towels, wireless internet, cable TV, air conditioning, free cleaning, an elevator and most importantly, breakfast.

With just a few ticks and a click of the mouse, all of my requirements were met by none other than Made Inn in Portimão and at a very reasonable price – only €35 a night for a double. It took me about two seconds to notice “Ninento Wii available” also listed in their description which is when I decided that this had to be a match made in heaven and where I needed to base myself while I was in the Algarve.

Five seconds later my inquiry was sent to them and about a day and half later I finally got a response that they did have a double room available for me on the dates I had requested. Not having a reservation confirmed right away was perhaps the only downside but since it all worked out in the end, I wasn’t too bothered by it. I’ve heard inquiring about apartments can be more difficult but a cool thing that Roomorama does is call the hosts themselves at your request if you don’t hear back from them in a timely manner. Haven’t tested it personally, but it’s nice to know they offer that.

As for the hotel itself, it turned out to be exactly what the accommodation doctor ordered.

I know some might be wondering why a pool, gym or balcony was not one of my demands as a travel blogger, especially considering I was staying in a region with some of the best beaches on the planet. And there’s a very simple answer to that: I had to work.

Yes, believe it or not, this lifestyle does not come for free and after a week of drenching myself in cognac and another week of pounding port wine in northern Portugal, I needed not only to detox, but also to lock myself in a room equipped with wifi and no distractions in order to TCOB (take care of business). It’s for this reason that I was also secretly relieved my final search results didn’t come up with any spots in Lagos. Had heard from multiple sources that place gets pretty wild which sadly/happily I did have a chance to confirm on my last night.

The location of Made Inn was perfect for my situation – in the center of the old town and in close proximity to lots of great cafes, restaurants and shopping. NOT THE BARS AND CLUBS. Those are found mostly near Praia da Rocha which was still easily accessible to me by bus or a 20 minutes walk, but thankfully not within stumbling distance.

For a two star hotel, I was pretty impressed by the place. They seemed to have done their best to try to make it as funky and hip as possible for those on a budget. I mean, how many places have you stayed where there is Nintendo Wii on demand? The rooms were very clean and smart with well-functioning air conditioning and cable TV that I happily fell asleep to every night. Caught up on some much-needed sleep on that left bed, oh yes I did.

I also found the staff incredibly friendly and helpful which is the main reason why I ended up working in the lobby the whole time instead of my room. That and because they had the TV down there set to Portuguese VH1 which kept surprising me with all kinds of obscure and wonderful hits from the 80s and 90s (hello, Paula Abdul).

My most important requirement as stated before was breakfast and the Made Inn did not disappoint. They had a large selection of bread, cheese, and meats as well as some warm favorites like scrambled eggs and sausage. Oh yes, and they served THE BEST salame de chocolate I had the entire time I was in Portugal. Still dreaming about that deliciousness. Only complaint was waking my eyes up to such bright neon first thing every morning, but it was a small price to pay for having access to such an incredible spread.

Don’t think that just because I was away from the beach and the hotel didn’t have a pool that I wasn’t able to take a few sun breaks throughout my days. One of the best spots in the house that I don’t think many other guests knew about was their roof top terrace with a view. Day and night, I wandered up here often to take in the views.

My first time using Roomorama may not have involved an apartment rental, but it sure turned out to be a great alternative for finding accommodation. If anything, I think my experience has shown how versatile the site really is and how they have something for all tastes. I was definitely eager to use it again which is what I  ended up doing while I was in Madeira, but more on that later..

Huge thanks to Roomorama for providing me with quality accommodation during my time in the Algarve. I’d also leave you with this little treat – something for my homies (you know who you are) back at Made Inn.