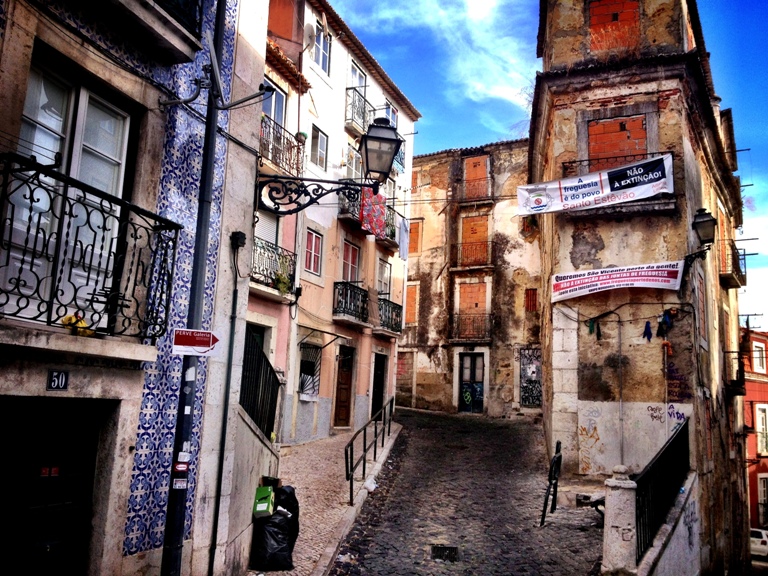 If ever in Lisbon, go get lost in Alfama at some point – that’s what everyone says to do and it’s pretty easy to do the deeper you wander in. It has to be the most interesting neighborhood in the city. Not because there’s tons of stuff to do, but because it truly is the heart and soul of ol’ Lisboa.

Most people just pass through Alfama to have a look, but I was lucky enough to call it home for the four nights I spent in Lisbon this past September. I was staying with Wimdu during this part of my Blonde Gypsy Portugal trip and it was through their site I found Casinha Do Largo. I thought I was just booking a sexy apartment in a pretty good location, had no idea I was going to end up getting a full-blown Lisbon experience.

Alfama is where the OG Lisbonites live and where their families have lived for generations. It’s the oldest district in Lisbon and survived the 9.0 earthquake in 1755 that destroyed over 80% of the city so what you see and feel here is raw history. It looks pretty rough around the edges at first, but soon enough you start to realize that is all part of its charm.

Though Alfama isn’t where Fado music was born, it has been a source of inspiration for Portugal’s version of the blues for nearly two centuries. It’s also where you can find some of the most atmospheric (as well as touristy) Fado houses in the country.

It’s where inquiring old ladies will try and strike up a conversation with you from their window sills regardless of a language barrier as you walk by.

It’s where you will order the worst cappuccino in your life yet do it over and over again because the old man who makes it is just too damn sweet.

It’s where you can watch a million trams roll by and jolly Alfamians attempt to direct traffic.

It’s where you can buy the best souvenirs in town with a killer view. Feira da Ladra (aka Thieves Market) is open from 6am to 5pm on Tuesdays and Saturdays and starts just near Arco de São Vicente. It’s essentially a second-hand shopper’s paradise and even if you’re not buying, it’s an interesting scene to stroll through.

It’s where graffiti and items of clothing strewn every which way actually adds to a building’s character, not detracts from.

It’s where you order a shot of ginginha for 1 euro from the living room of a larger than life lady in a leopard moo moo after a long day exploring the city.

It’s where you should go with someone who you love as it’s here you can find some of the best miradouros and most romantic alleyways in all of Lisbon.

Alfama isn’t a neighborhood, it’s an experience which is why I suppose getting lost there comes so highly recommended. Not sure I would have felt Lisbon quite as much as I did had I stayed elsewhere so for that I am thankful for Wimdu for giving me the opportunity to “travel like a local” and for the incredible hospitality of those behind Casinha do Largo.
If you’re interested in having a similar experience, Casinha do Largo can be rented out from 50 euros a night (sleeps up to 4 people). While my stay there was sponsored, all opinions are my own.
#BlondeGypsyPortugalAlfamaCasinha do LargofadoFauxtographyiPhoneographyLisbonPortugalWimdu
by Larissa
7 Comments