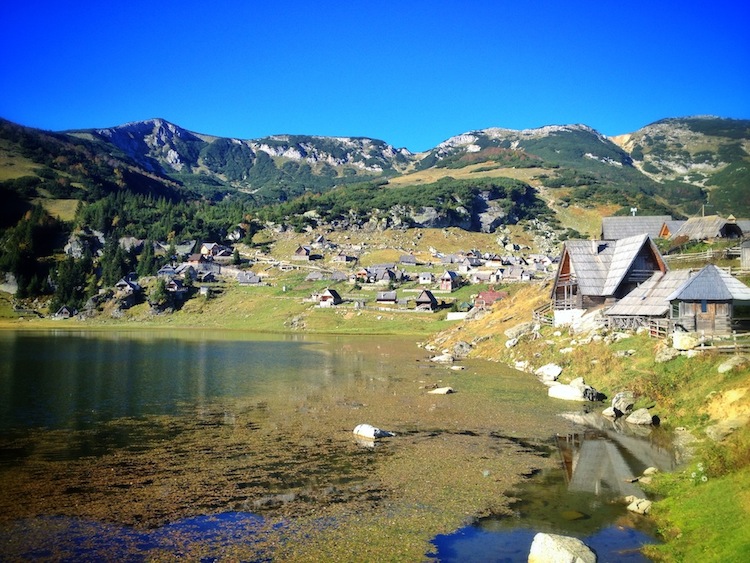 Moving right along on the Via Dinarica White Trail…

Spending the night on Prokosko Lake

From the source of the Vrbas River we headed straight to Prokosko Lake on Vranica Mountain. It was pitch black outside by the time we arrived that evening and our appetite was well worked up after a day of rallying around the mountains in Rodney, our 1998 4Runner. As we were way up on Vranica Mountain with barely any electricity, we could see nothing of the village except our little mountain hut, Nicija zemlja, and the neighboring mini-mart/restaurant/bar that was only open because they knew we were coming. Us and a few rugged mountain men.

We were served a decadent meal of three types of fresh cheeses and a ginormous pan of zeljanica that the owner’s mother threw together for us in about 20 minutes flat. I think it goes without saying that Bosnia is definitely not a place you should expect to lose weight on your travels, even if you are burning thousands of calories a day doing mountain sports.

After dinner, a warm bed was really the only thing on my mind, but on the way back to the hut, something stopped me dead in my tracks. Those stars! Never in my life have I seen the Milky Way and so many stars shining as brightly as they were that night. I was seriously in awe at that very moment and wish I could have somehow captured the scene to share with you, but then again, that’s what made it so extraordinary. It’s moments like that and then waking up the next morning to the set up below that should make any person appreciate mountain living and want to kiss Mother Nature on the lips.

Just have to also mention that on the edge of the village you can find a poignant memorial to the twelve people who lost their lives there in a U.N. helicopter crash in 1997. One of them being Gerd Wagner, a pivotal figure in post-war peace mediations. The story sounds pretty fishy to me, but most sources site “no foul play suspected”.

At this point I wasn’t even halfway through my Via Dinarica adventure yet, but still, I knew Prokosko Lake was going to be one of my favorite stops, if not the highlight of the trip. And I was right.

It’s just one of those places that’ll completely capture your attention and make you forget about everything else in the world. Even wifi if you are travel blogger.

Climbing to the summit of Vranica Mountain

I thought we were done with hiking for the day which is why I was a little perplexed when Benjo pulled the car over on our way down from Prokosko and Kenan and Elma hopped out only to immediately begin a vertical ascent up this mountain covered in 50 shades of fall.

Apparently we had been driving slightly upwards from the lake, not down, and they were waiting on me to get moving. Story of my Via Dinarica life. But my oh my was it worth it once I finally did.

After I caught my breath and quit cursing myself for not being in better shape before signing up to climb mountains with expert mountaineers, I realized we had made it to the summit and I was standing on top of the highest mountain in central Bosnia – Nadkrstac on Vranica Mountain (2,112 meters). Awwww yeah!

By the way, Elma is doing a headstand on every summit they reach so I’m glad I got to catch at least one of them. P.S. Nice try, Benjo..

From Vranica Mountain, we drove down to Bugojno for a quick coffee break and to meet up with some gentlemen who we were going to take us off to the next adventure – rock climbing.

Bugojno is a medium-sized town that sits on the Vrbas and seemed pretty nice with quite a bit of energy radiating from the strip of cafés where we were seated for about 30 minutes, but that’s about the extent of what I saw. Walked down to the end of the promenade and snapped this photo just for good measure.

From Bugojno we drove 25 minutes back towards the mountains to the climbing area. I wasn’t going to climb, I was just going to watch, but once I realized what a once in a lifetime opportunity was laid out in front of me, I couldn’t say no.

I didn’t love rock climbing, but it was a lot more fun than I had expected and I’m glad I gave it a go. The heights factor and that my upper body strength is on par with that of a toddler is what kept me from making it much further than 15 meters, but well, maybe next time. For the climbers out there, the level I attempted was a 5b/5.8.

It’s worth mentioning that “one of the best climbers in the country” alongside me was Armin Gazić who is widely known as one of the most promising climbers in the region. He is the only Bosnian to have climbed the north face of the Matterhorn and at 23 years old, he’s basically just getting started. I was more than impressed watching him do his thing on this advanced rock face he set up for himself and if you’re interested in doing something similar while in Bosnia, make sure you connect with him through Triton, the local adventure tour company he co-founded.

What a way to spend a day. Tiring, for sure, but the rewards along Via Dinarica have just been priceless which you will continue to see. But in the meantime…

Via Dinarica has been made possible by the generous support of USAID and UNDP BiH.

TO THE BALKANS/EURASIA/THE CAUCASUS & BEYOND : Hitting the Road - Sarajevo to Tbilisi