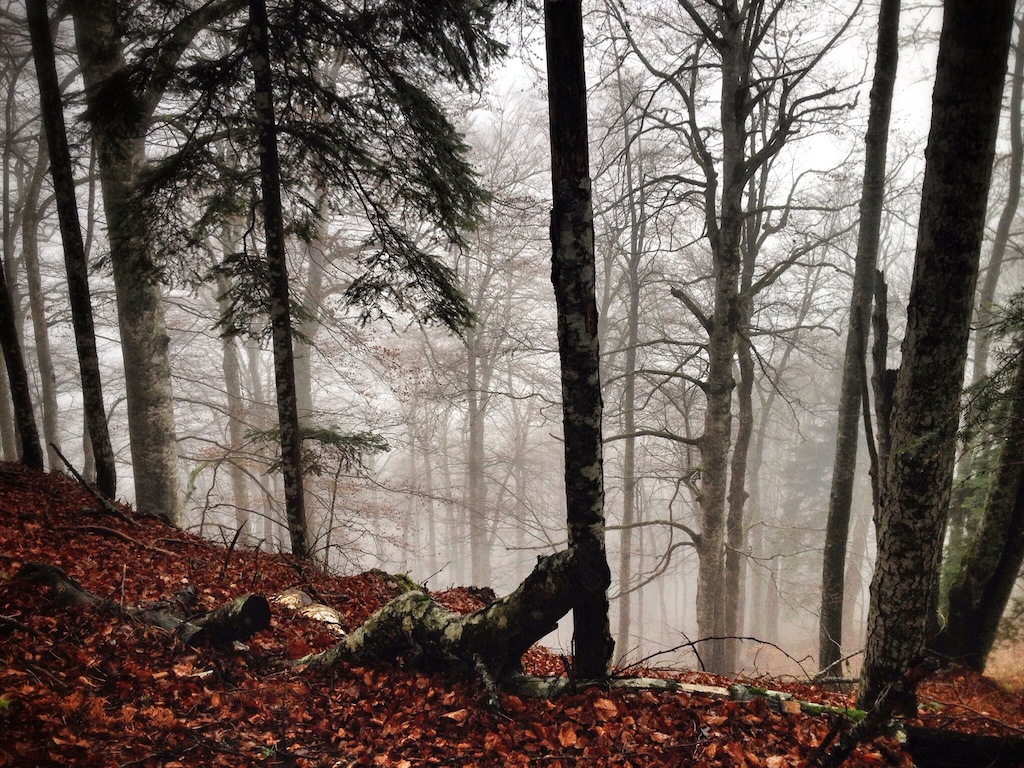 As I stepped back into the roadside restaurant after making a call, my tired eyes desperately scanned the table for the coffee I had ordered the moment we arrived. Thank god the waitress was just setting it down. I needed all the liquid energy I could get before my last ascent of the year into the Bosnian mountains of Sutjeska National Park.

Did I want sugar with that? No. But I would absolutely love a shot of rakija like you just brought out for the boys.

I looked towards the end of the table at the other two bloggers joining us from Canada and Switzerland who were clearly amused with tea in their hands by our early morning requests as it wasn’t even 10am yet. “Breakfast of champions, eh?” Actually, breakfast, lunch, and dinner of champions, dude.

Rakija, which is basically Balkan brandy made from various fermented fruits, is a serious tradition in these parts. Something that after nearly two weeks on the Via Dinarica trail, I had more than become accustomed to, even in the early morning hours. Not that you ever have to twist my arm to join you for a drink…

Like çay in Turkey, but inebriating, it’s really quite rare to end up in anywhere in the Balkans, especially in the mountains and backwoods, without being offered some of this regional spirit that is 99.9% of the time distilled by the host themselves, someone in their family, or their neighbor. It’s the warmest of welcomes, quite literally, and at the same time, by no means an invitation to “get wasted”. At least not unless you want to.

On this particular morning though, none of us were looking to get wasted. We were heading up towards Maglić, the highest peak in Bosnia & Herzegovina (2,386 meters/7,828 feet) located in Sutjeska, the oldest and perhaps best national park in the county.

I never like to play favorites, and I’ve had my fun in some of the others, but something you need to know about this particular national park is that aside from being home of Maglić, it also contains Skakavac Waterfall, one of the highest in the country, and Perućica, one of the last primeval forests in Europe.

What is a primeval forest, you might ask? Basically, they are a big deal in the grand scheme of the thing we call Earth. It’s a “virgin” forest, one of the only nature spots left that hasn’t been touched for the very first time and has been allowed its birthright to just grow. No interference, which sadly is rare in this day in age. Even more rare in a region like the Balkans where illegal logging is happening all the time.

Just to put it in perspective, the percentage of all primeval forest left in the entire world that’s in Europe is only 3%.

But enough about science, back to that rajika…

It really proved to be a good friend once we hit the base of Maglić where it was freezing and had started to snow pretty good. So good that we could barely see the big guy or continue up any further to try to catch a glimpse of Montenegro which lies just on the other side.

No big deal. It was the first legit snow of the season on my last day in the Balkans before heading back to winterless Southern California so I wasn’t disappointed in the slightest. I was actually stoked. See?

One last thing I’d like to mention about Sutjeska before I leave you with some sexy Balkan sounds to dance to is that aside from being mind-bogglingly beautiful and a real ecological gem, it’s also where a major historical event took place. Maybe you’ve heard of the Battle of Sutjeska or seen the 1973 film about it, the most expensive one ever made during Yugoslav times starring Richard Burton as Josip Broz Tito?

If not, now you have and you should feel enlightened because it’s also a big deal. The battle, that is, which was one of the toughest and bloodiest fought by the Yugoslav Partisans during WWII. Memorialized of course in the best way Socialists back in the 70s knew how – with one huge ass stone monument. This monster below is found in the village of Tjentište and really quite impressive. Even if you’re not looking to do anything outdoorsy while in Bosnia, it’s definitely worth making the 1 1/2 hour drive from Sarajevo just to check it out and all the amazing scenery along the way.

Timeless traditions, fresh snow, and great company in the most beautiful setting – it was truly a perfect way to spend a last day in one of my favorite countries. Cheers to many more which are just a few months away now…

Any experiences with rakija, Partisan monuments or primeval forests you’d care to share? Here’s a drinking song about rakija for you from a Serbian band. Introduced to me at a party in Bulgaria. By Macedonians.