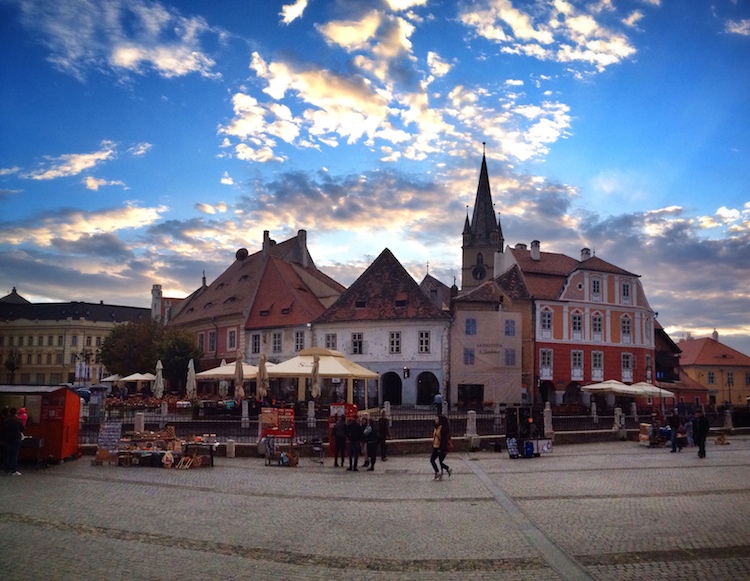 It’s been nearly four years since I first found myself lost in Transylvania and like many first time visitors to the region, I have to admit I was half expecting to find a creepy, wacky place where Halloween is celebrated year-round and the chances of running into Dracula or werewolves on the street are pretty high, but that couldn’t have been further from the truth. Kind of.

Though some kitsch definitely exists, especially in Bran and Sighisoara, in general what I found instead of a living horror story was some of the most colorful towns and villages I’ve ever seen, and Medieval history so rich that it would make even the Green Knight jealous (Medieval Times humor, anyone?). This part and heart of Romania is home to some of the best-preserved, fortified city centers in Europe and some seriously beautiful countryside, so not surprisingly I was delighted to receive an invitation to return this past October and give another part of Transylvania a go. This time in and around Sibiu.

As a former European Capital of Culture (2007) and the second largest of Transylvania’s fortified Saxon towns behind Brasov, Sibiu (or Hermannstadt as it’s called in German and Nagyszeben in Hungarian) is probably one of the most “happening” spots to base yourself while exploring the region, but still relatively quiet unless a festival or big event is taking place which is pretty often so make sure you check their calendar of events. Spending one or two days hanging around there is more than enough time to get to know the city and here are just a few suggestions how.

Wander around the fortifications and colorful alleyways

No matter where you are in the world, one of the best introductions to a place always comes in the form of a good wander around without a map (or at least not pulling one out until there is a desperate situation on your hands), and Sibiu is pleasantly perfect for this. It’s not too big or confusing for those who are a little more directionally challenged and many parts of it will seem more like a scene from a storybook, a real colorful one, rather than one of largest cities in a region more often than not synonymous with macabre. As the main city of Saxon Transylvania, it was populated primarily by German speakers until World War II which gives it a really charming Western European feel that you might not have anticipated out in “the East”.

Have a stare down – with a roof

This may sound totally random but I’m pretty sure once you catch a glimpse of some of the many sets of “eyes” that watch you as you wander around the city, you’ll feel me on this one.

A style of dormer windows that are quite specific to Sibiu and in many ways one of its trademarks, these “eyes of the city” may creep you out at first and make you feel uncomfortable, but don’t let them win. Just give a bold stare back to remind them who is boss and from there forward, you won’t have any problems. In fact, you might even find them slightly adorable.

A few places you want to find yourself chilling at one point or another during your time in Sibiu are in the Upper Town’s three main squares: Piata Mare (Great Square), Piata Mica (Little Square), and Piata Huet (Huet Square).

Piata Mare (above) is the largest of these squares and where you will find the Town Hall, Tourist Information Center, Catholic Church, Brukenthal Museum, and big events. It’s almost too big though I do imagine the Christmas Market that goes down there is pretty awesome if it’s anything like the ones held in some of Europe’s other big squares.

The much more quaint and cozy Piata Mica around the corner is where you will find most of the good cafes and restaurants. A great view of it can be see walking up from the infamous Liars’ Bridge (first wrought iron bridge in Romania) where underneath it’s said the town’s gossipmongers used to congregate back in the day and if you tell a lie while on it, it will collapse beneath your feet. Or something like that.

Sort of in between both Piata Mare and Piata Mica is Piata Huet which really doesn’t have all that much going on except for some awesome buildings like the gorgeously gothic Lutheran Cathedral of Saint Mary from the 14th Century and Brukenthal Gymnasium, the oldest school in Romania.

To be honest, I was not in a museum mood whatsoever the entire time I was in Sibiu so therefore didn’t visit any at all. This is a shame considering a couple of the best in the country are found here, but since Sibiu itself is essentially a living museum and I was shown around it by one of the most culturally knowledgeable people in the city (shout out to Razvan Pop), I didn’t feel too bad missing out this time around.

Two of the most popular that you should know about though in the event that you’d like to squeeze a bit more culture in and Razvan is not available are the Brukenthal National Museum and the ASTRA National Museum Complex. The Brukenthal Museum is located in Piata Mare – the oldest in Romania (imagine that) housing paintings from the likes of Ruebens, Teniers and Van Dyck – while the ASTRA Open Air Museum is in the middle of a forest and next to a lake three kilometers outside the city. It’s one of the largest open air, ethno-museums in Europe at 250 acres that features over 300 buildings displaying a variety of architecture from villages around Romania.

If you’re looking for a Viennese inspired pit stop with a view and cosy atmosphere, Cafe Wien is your spot. Right on Huet Square and with an excellent view of the Lower Town from its terrace(s), it’s a great place for everything from coffee and some cake to breakfast, lunch, and dinner.

Climb to the top of Turnul Sfatului (Council Tower)

For the best view of Sibiu from above and its surroundings, a climb up to the 13th Century Turnul Sfatului (Council Tower) is mandatory for every visitor – and recommended towards the end of the day/magic hour when the Old Town’s colors are looking their prettiest. It’s located right in between Piata Mare and Piata Mica, and another unmistakable landmark of the city.

As mentioned before, this trip was the result of an invitation as a blogger to explore Sibiu from #MySibiu. #MySibiu is a project implemented by AIOS (www.aios.ro) and www.ImperatorTravel.ro and is financed by Sibiu Town Hall (www.turism.sibiu.ro). Again, special thanks to Razvan Pop as well as Tudor St. Popa for being great hosts.