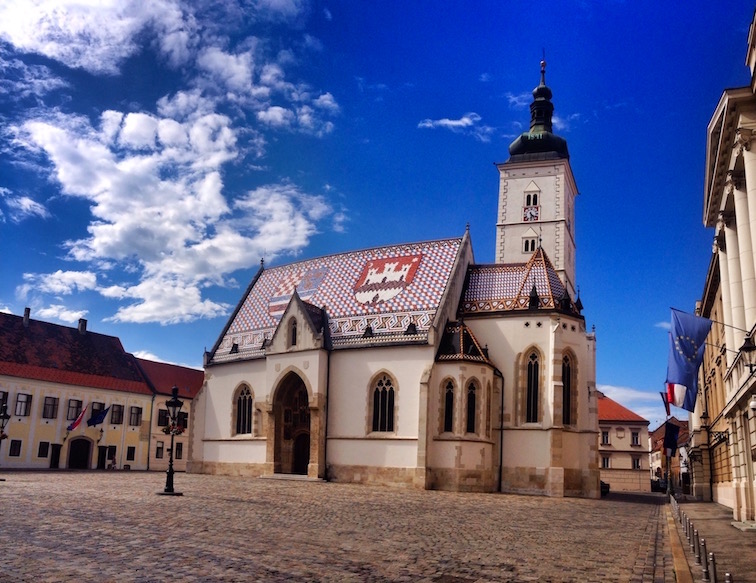 The first time I met Zagreb was kind of awkward. It was a rainy 24 hours and only 24 hours to “make the most” during an ambitious train tour I was involved in back in 2013. Needless to say that didn’t really work out and I left on my merry way to Belgrade basically not knowing a lick about Croatia’s capital which I always felt bad about.

By the grace of the social media gods, however, I was recently sent an invitation by the Westin Zagreb to come back and meet it again alongside a whole motley crew of talented Instagrammars. Of course I couldn’t/shouldn’t/wouldn’t pass up such a sweet offer – especially such a well-thought out one that would take us deeper into Zagreb than I could ever plan on my own. An intensive 48 hours in Croatia’s super cool and seriously underrated capital – here is how it all panned out…

The first place we headed after our arrival was straight to Dolac, Zagreb’s largest open air food market. Can’t get more deep into a culture than its food so we were lucky that accompanying us around and introducing us to some of Croatia’s culinary specialties was award-winning Executive Chef Matija Balent from the Sheraton Zagreb. We had a mission to buy some goods and later on would cook them all up back at the hotel.

Being a chef is in Matija’s blood, the tradition in his family actually goes back a few generations. His father was at one point a personal chef to Tito and no doubt he was pulling his ingredients from the same exact stands in Dolac as we were. I don’t think it would be such a stretch to assume he was also pulling them from some of these same exact mamas. Like stepping straight into the Seventies, the underground portion of Dolac where you find all the meat and dairy is some kind of wonderful for people watching. Probably no better place to experience real life in Zagreb – real, retro life.

On our way back to the hotel for some home cookin’ we were pleasantly surprised – or at least those of us in the group fond of day drinking – with a stop off at Cheese Bar for some cheese, meats, olives, and sparkling rosé. THIS IS CROATIA (see below) and while its cuisine may not be as world renowned as Italy across the way, it’s pretty damn incredible in its own right. Incredible and SO simple, but then again, simplicity is the ultimate sophistication.

Back at Sheraton Zagreb, the Westin’s sister just down the road, we set up camp in its King Tomislov Restaurant where I joined the team for support in the kitchen to prepare some particular delicacies from Zagreb (krpice sa zeljem, štrukli, etc.). Although I only facilitated the frying of the fish we purchased, I think Matija basically saw me as a young talent and sure if I was ever looking for a new job in the future, I know who I can call.

After a lunchtime feast fit for King Tomislov himself (first king of the Croatian Kingdom, btw), it was time to explore more of Zagreb. Cut in two parts, the center is comprised of Donji grad (Lower Town) where we were starting from and the older Gornji grad (Upper Town) where we would be ending up. I have to say my impression of Zagreb the second (and sunnier) time around is that it is a super liveable city. Urban chic with so much green and mind-blowingly clean for a European capital.

Laid out like a grid, the Lower Town is a very straightforward area to roam around and with sufficient signage for all of Zagreb’s main sights, it’s unlikely you could ever get too lost. Every block seems to be connected to some sort of beautiful green space and though I never noticed it before, the architecture is quite lovely – very Budapest-ish and Vienna-ish due to its former connection with the Austro-Hungarian Empire.

Passing through Ban Jelačić Square, we made our way to Zagreb Cathedral which I guess sort of marks the beginning of the Upper Town and is apparently the highest building in Croatia at 108 meters tall. This makes no sense to me at all as it doesn’t seem extraordinarily high, but then again I guess Croatia isn’t exactly known for its skyscrapers.

It’s a Neo-Gothic stunner for sure and inside there are a couple things some people who aren’t into spending a lot of time inside churches might find interesting. First is this display on the wall right by the entrance written in the most bonkers font I have seen in my life. Like someone on ecstasy was trying to practice Cyrillic and just started drawing a henna tattoo instead. But I learn something new every day and it’s actually glagolitic, the oldest known Slavic script also created by St. Cyril.

Then there is the embalmed body of Cardinal Alojzije Stepanic chilling in the front who you can pay your respects to. He was the Archbishop of Zagreb from 1937 to 1960 and no pushover which ultimately lead him to a 16 year prison sentence. From helping Jews escape during World War II to publicly condemning the new Yugoslav government for the Ustaže atrocities, he was pretty vocal about the politics of the time and because of this tried for war crimes. Tito granted him house arrest to his home parish in Krasic after five years and he died there in 1960 at the age of 61.

Walking west from the cathedral, we headed towards super cute Tkalčićeva Street to start making our way up to the highest point of the old town. This area is full of nice restaurants, cafes and shops along the way – and supposedly where you can find some of Zagreb’s best nightlife.

Entering the eastern part of the the Old Town through Kamenita vrata (Stone Gate) is something special. It was converted into a beautiful shrine to the Virgin Mary as it’s the only spot that survived the great fire of Zagreb in 1731. Just around the corner from there you meet St. Mark’s Cathedral, one of the main symbols of the city that people call the “Leggo Church” but I just call it amazing. Photos don’t do the colors and details justice, you’ll see for yourself when you make it there.

This is the part of town you will find some of the loveliest panoramas of Zagreb (minus the 17th floor of the Westin), especially in and around Strossmayer Promenade and from the top of Lotrščak Tower which is where they have been firing a canon everyday at 12pm sharp since 1877. There is a funicular right below it, one of the steepest in the world, but it wasn’t operating while we were there.

Last but not least was the Museum of Broken Relationships just next to the tower which I have been wanting to visit since I first read about it opening in 2010. Not your average museum, this relatively small space filled with donated mementos from broken relationships around the world is sure to leave a huge impression on anyone who has ever loved and lost. The more recent the loss, quite possibly the more powerful the experience…

We finished the day properly back in the Lower Town at The Place with one of the best rakija tastings I’ve had in my life with Aura Rakija from Istria. Wild apple, rose hip, carob, forest fruit, honey, teranino… we tried it all and let’s just say one of my new goals in life is to spend a week at their facilities in Buzet to get a firm grip (and taste) on what it takes to produce rakija.

We had much less planned for our second day which was perfect since all I wanted to do was spend some quality time with my hotel room and enjoy the spa. Though I’m not generally too picky with my hotels when I travel as I’ve always had the mindset that it is just a place to sleep, there is something to be said about treating yourself to a bit of luxury every now and then – especially when it includes a Heavenly Bed with perfectly fluffed pillows, cable tv (like, the good kind), room service for breakfast, and an aromatic massage. The Westin was the absolute perfect relaxation station, wish it didn’t have to end.

Close to mid-day we were off again, first up to Johann Franck back on Ban Jelačić Square to learn about Zagreb coffee culture and check out one of the coolest places to party in the city. Though it was the day time, I could definitely see its potential as a sweet club venue and will definitely be paying a visit after hours next time I’m in town.

Again, maybe Croatia is not as well known for its coffee and cafe culture as Austria or Italy, but having been influenced by both throughout the centuries – it’s just as strong, if not more thanks to a little Ottoman inspiration thrown in back in the day. People can sit for hours over one cup just having a chat and for 120 years Johann Franck has been the main coffee brand not only in Zagreb, but the whole country, so it was a great place to get acquainted with this aspect of the culture.

Moving on from the center, we made our way out to the ‘burbs about 10 minutes to the Museum of Contemporary Art to check some modern installations. I’m not the biggest fan of modern art, especially when it resembles piles of trash, but I did enjoy a few of the exhibits they had inside there and you will too if you fancy this style. Best part was the metal slide that brings you from the top of the building to the bottom and of course the lovely open air picnic surprise the Westin Zagreb arranged for us on the roof.

Last stop before our departure to Dubrovnik (more on that soon) was Mirogoj designed by architect Hermann Bollé – hands down one of the most beautiful cemeteries I have ever seen in my life with its endless arcades and gorgeous landscaping. It’s about 10 minutes away from the center, you can get there by the bus, and totally worth the effort.

All in all it was an amazing time in Zagreb, I really love that city and so thankful to have been given the opportunity to really get to know it in the company of some very passionate locals and seriously cool photographers. Big thanks to Westin Zagreb for hosting me, highly recommend that hotel if it fits your budget as it’s in a great location with the five-star comfort level the brand is known for around the world. Until next time, my super cool Croatian city friend…