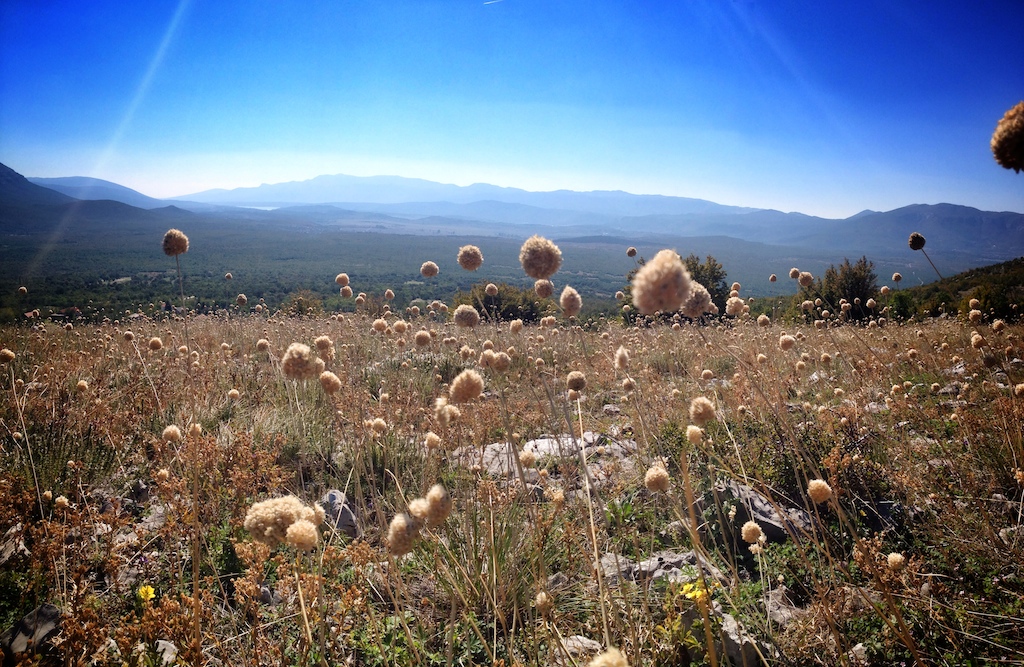 It’s a lot, trying to lay out my entire Via Dinarica experience through Croatia.

But I’m doing it.

Whether it looks like it or not, we actually covered quite a bit of ground on both the Blue and White trail in just 6 days. Starting in Plitvice Lakes National Park, we made our way down to the southern seaside towns of Makarska and Split, up to the peaks of Biokovo and Mosor mountains, and then drove north again to check out Krka National Park and its surroundings before I bid the team farewell in Kijevo. That’s the short of it.

The long of it is, well, keep reading and you shall see…

Crossing into Croatia from the relatively unexplored Una National Park in Bosnia & Herzegovina to the heavily touristed Plitvice Lakes National Park was a straight up shock to the senses. Both good and bad.

First of all, I would love to go back to Plitvice again as I didn’t get to see it in all of its [sunny] glory. It was grey and foggy the entire time which was kind of a bummer, but happens. Regardless of the weather though, it was quite apparent that this is a pretty special place and no wonder why it was the first national park established in Southeast Europe and attracts over 1 million visitors every year. No amount of cloud cover could ever conceal such beauty. On the other hand, maybe this can?

That’s for you to decide. Plitvice is very much a place you have to calculate a visit to if you don’t want to feel like another sheep in the herd. The above photo was taken in early October which leads me to believe that any time during the summer would be an absolute nightmare for people not into extremely packed tourist attractions (hi, hello). When I asked our guide approximately how many people fell into the lakes each year as a result of overcrowded footpaths, he just laughed and said, “More than you can imagine.”  On the contrary, sir. I almost did, twice, and that’s why I asked that question.

From Plitvice Lakes, we drove down to Makarska on the Dalmatian Coast for a quick pit stop before we headed up to Biokovo Mountain. At this point, I’m going to tell you, I was starting to get a little “hiked out” and my body was starting to ache.

Needless to say, by the time we reached the Vošac Mountain Hut after hiking 25 minutes in pure darkness, I was ready to crawl into the first bed I could find. Thankfully the mountain huts in Croatia are pretty well-maintained in comparison to what I had encountered in Bosnia (less funding there, not exactly rocket science as to why), so it was much easier falling asleep knowing I didn’t have to worry about big spiders or Balkan chupacabras climbing into my sleeping bag.

The next morning things did not look promising for our planned hike as it was raining off and on with the mountain completely covered in clouds. I can’t say I was super disappointed as hiking in the rain is not fun and we still made it up to Sveti Jure, the summit of Biokovo – just in a toasty 4-Runner.

We also had one of the most memorable meals of the entire trip with the guys running Biokovo Nature Park which certainly would not have happened had we been out hiking all afternoon. A killer view of the Adriatic from 1600 meters above would have been sweet, but I personally enjoyed getting all cozy in this gentleman’s cabin instead with great company, a nice assortment of rakija, and meat. LOTS OF MEAT.

By the way, have you ever seen a horse with a cooler hairstyle?

And are you getting tired yet? Because I was, and sore, so it’s about this point where I had to make an adjustment to my itinerary and stay overnight in Split rather than go on with the crew to stay another night in a mountain hut on Mosor. Call me a baby, call me a diva…but guess who got to take a normal shower, wake up inside Diocletian’s Palace, and dip her toes in the Adriatic? This gypsy.

Truthfully, I don’t regret the decision one bit even though I later heard I missed meeting one of the best mountain hut keepers they ran into on the entire Via Dinarica trail at Umbretto Mountain Hut. Oh well. I’m glad they had a good time but sometimes you just have to choose your battles.

At least I got to see an amazing view from where we picked them up at the end of a trail. A view I’d highly recommend making your way up to if you are ever in Split (just take the Adriatic Highway, exit Zrnovnica, and follow signs to Gornje Sitno) because even though it’s only 30-40 minutes to get to by car, I’m pretty sure most visitors never get to see the second largest city in Croatia from this perspective.

Behind Plitvice Lakes, Krka National Park (about an hour and a half north of Split) is one of the largest in Croatia that I had never heard about which turned out to be a great thing. Fewer people, much more accessible, and you actually feel like you are in a national park, not Disneyland.

Though less hyped than Plitvice, this park is pretty spectacular in its own right and encompasses 109 sq miles of the Krka River and its basin. Not only does it have its own waterfalls as well (the most popular being Skradinski buk and Roški slap), but it has its own waterfalls that you can actually swim near. There is no (intentional) swimming allowed in Plitvice.

Krka National Park is also home to what I like to call Lake Bled’s less-crowded, Franciscan cousin – Visovac.

Visovac obviously doesn’t have the same “wow factor” as Bled Island since it is missing the magnificent Julian Alps as a backdrop, but I will show you what it does have that is probably going to impress you beyond belief. Are you ready?

That’s right, the world’s smallest book. A provocative portrait of a Nursing Madonna. A rare illustrated copy of Aesop’s Fables that was printed in 1487. One of the largest collections of Turkish documents in Dalmatia (sorry, no photo). A Gothic/Baroque church with two alters. What more could you want from a 500+ year old monastic islet? Maybe some swans, but thankfully I found a few of those too (sorry, no photo).

On that note, it is here where I will end my report on all of the natural wonders we explored while in Croatia. This is also the last post I will be writing about my travels along Via Dinarica which I am still so honored to have been given the opportunity to be a part of. I may not have been the likeliest candidate to bring along, but I think in the end that’s what made it more interesting.

This was by far the most exposure I’ve had to great outdoors and after having my mind totally blown by the beauty and peacefulness of it all, I can’t imagine my life now without some mountains in it from time to time. Especially these mountains because as I quickly learned, they’ve got some character and there is something really special about the network found in the Dinaric Alps. More than a network, there is a growing community with a shared passion for the land that seems to transcend borders, and to a degree, even nationalities which is so heartwarming to see after some pretty difficult decades.

With a little more fine tuning, Via Dinarica is set to be a real ecotourism force in Europe. I’m sure of it. It’s absolutely one of the cheapest regions for outdoor activities and adventure sports, it’s outrageously beautiful while still relatively “unexplored” compared to other hiking spots on the continent, and it’s where you will find some of the most welcoming and hospitable people on the planet.

The time is now, nature lovers. Go and get it.

The Via Dinarica project has been made possible by the generous support of USAID and UNDP.