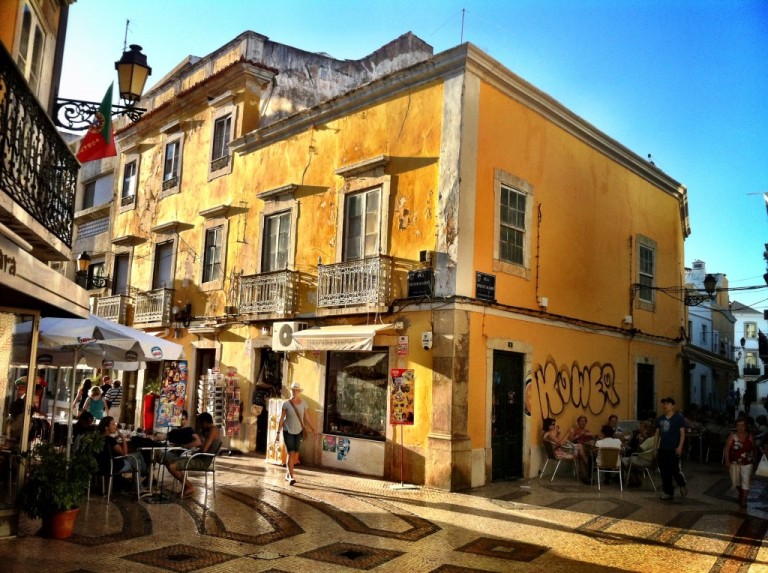 If you are headed to the Algarve, odds are you will be arriving via Faro. It’s the administrative capital of the Algarve, population of around 40,000, the southernmost city on continental Portugal, and where you will find the largest airport in the region.

And that pretty much sums up all that I knew about the place before I landed there.

Consequently I didn’t plan to spend much time in Faro since it wasn’t one of the towns I had heard loads about, just that it was easy to get everywhere else from there. In the end this turned out to be kind of a bummer because I actually quite liked the place and had I not made accommodation arrangements in Portimão, I probably would have stayed longer.

Since my flight from Porto got in so late, I really only had the following morning and afternoon to explore before I had to catch my train. For some people this might have been more than enough time as the town is pretty small and all sights concentrated within a very walkable area (except for the beaches – I will get to that in a bit), but I found myself in a little predicament. I made some friends.

First let me back up a little and mention that I didn’t have any accommodation lined up for my only night in Faro until a couple of hours before I arrived because, well, sometimes I’m a little “unorganized”. In a frantic 5-minutes-until-I-have-to-leave-for-the-airport accommodation search, I booked a bed at Casa d’Alagoa. It was one of the top rated hostels on multiple sites and most important of all, it looked like it would be the easiest to find in the middle of the night.

Faro Airport is very close to the center of the city which is pretty convenient and there is a bus that runs every 30 minutes to an hour (random, I know, but have a look at the schedule yourself). It drops you off at the main bus station for less than €2 and takes 15-20 minutes. Actually you might also have a look at this timetable too since according to the airport’s website “the buses at Faro Airport do not run a service that matches the timetable minute for minute”, pretty much code for “you’re on Algarve time now, honey”.

Right, where was I…getting off track providing you with useful information I suppose. So I arrived to Casa d’Alagoa safe and sound in the middle of the night. They provided very detailed directions with the booking which I found to be invaluable once I was faced with the maze that is the city center. It’s super easy to get lost around there just because signs are vague (if any at all) and streets snakey, but the good news is that it is so small you could never stray for too long.

As I said, it was the middle of the night and after a couple of hours of traveling with Ryanair (which is equivalent to traveling a couple of days on any normal airline) I was just in one of those moods where I didn’t feel like hanging out with anyone, not even myself. Yet somehow I ended up on the patio chatting with the girl who was working at the front desk and two dudes. When I told them my travel plans they were almost like offended by the little amount of time I was going to spend in town but gave me tips on what I should see and do anyway. Found out there was a bone chapel there, one of only three in the country, so I decided that I would make it my mission the next day to find it.

Set out bright and early the next morning because I heard opening hours were weird there and guess what, I couldn’t find it. I did do a few sweet laps around the center though which allowed for me to become better acquainted with the place. Always looking on the bright side…

It’s totally cute, right? Well after the third or fourth lap I was getting hungry and annoyed with my inability to read maps so I headed back to the hostel to reassess my situation and ask where I could grab a good lunch. The girl at the front directed me to a spot around the corner called Pastelaria Coelho and was like “you’’ll probably see Nuno there, he just went”. Cool, don’t know who Nuno is, but I guess I will see him there.

Got there and what a great spot – total local joint with great prices and a menu that is not in English. Since I don’t speak Portuguese (yet), I was at a loss for what to order so was just going to pull the old close-my-eyes-and-point trick until Nuno walks up and saves me. Oh, that’s Nuno. One of the dudes I was talking to the night before, I just never caught his name but most definitely recognized his face. He recommends Empadão de Frango and then invites me to join him at his table.

Turns out that not only was the Empadão de Frango muito delicioso, but also that Nuno is one of the owners of Casa d’Alagoa. Really a cool guy who shall one day take over the world of hostelling – he’s got grand plans and such a passion for it that I wouldn’t expect anything less from him. He rebuilt that hostel with his own hands and runs it with his whole heart so I’m really not surprised that it has become as popular as it has in such a short period of time.

We chatted a bit more about Faro, the Algarve, Portugal and he’s the one who ultimately convinced me that I needed to add Sintra to my itinerary. His son lives there so he goes quite often and just couldn’t say enough great things about the place. He also almost convinced me to stay an extra night in Faro as they were having a huge party that night but alas my hotel reservations in Portimão were beckoning me…

After we finished at Pastelaria Coelho, we headed back to the hostel so I could send a few emails and plan my final couple of hours in Faro. It was going to be intense as I still had my heart set on finding that damn chapel of bones and also checking out Praia de Faro, one of the main beaches there. Since there are no beaches in the city itself, you must take either a bus or ferry out to these islands to see some sand. Kind of annoying when you’re pressed for time but it all worked out in the end. Loooook what I found…

Capela de Ossos is not that hard to find at all. Think I was just half asleep when I was trying to do it the first time. Going to be honest though and break the news that it’s really not that exciting and actually super small. In fact, I think the interior of the church it is connected to is much more interesting to look at, but at least I got a couple of cool photos (fyi it costs around €2 to get into the chapel).

After spending a whole 5 minutes in there, I straight bolted to the bus stop by the marina, across from Hotel Eva, to catch a bus to Praia de Faro. Depending on the day, you can catch either the 14 or 16 bus. It takes you via the airport so something to think about for those who have a few hours to kill before their flight. By the way, how much do you love YOUR dog?

Praia de Faro was cool but sadly I didn’t have time to enjoy the beach so I just walked around for about 20 minutes and then caught the next bus back into the city. Praia de Faro is one of the biggest and closest to the center but from what I hear the best beaches are the ones on the deserted islands that are a bit further away. You have to take a ferry to them and that can be tricky once peak season is over. Praia de Faro is easy because it’s always accessible by bus.

This turned out to be quite the detailed account of one afternoon in Faro, no? Do hope I haven’t lost you yet because we’ve got one more stop and that is in Cidade Velha, the walled Old Town. It’s right next to the marina where the bus dropped me off so I thought I should run over and just go check it out real quick.

I think after this novel you can get a good sense of why I liked Faro as much as I did. It’s a nice town with nice people and I think I could have had a lot of fun had I a) stayed a couple more nights and b) come a few weeks earlier when summer season was still in full force. It was warm enough in mid-September, most definitely, but I really would have enjoyed seeing the city packed with more people. That is a strange thing to say as usually that’s what I try to avoid, but I feel like that’s when this place would really shine.

To be continued in Portimão…