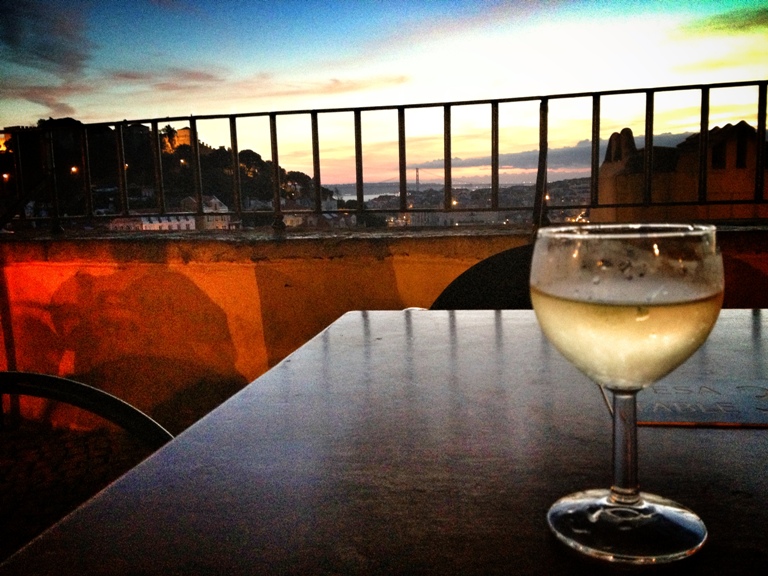 Lisbon, Portugal is not a particularly expensive city to visit. In fact, it’s probably one of the cheapest capitals in Western Europe. Being poor and sexy can actually get you a long way there, much further than say in Monaco. So what’s up with this post then, you might be wondering? Well, the answer to that is simple. This post was inspired by that one time I ran out of money while I was in Lisbon.

I will be the first to admit, I am not the best with money, but this really only happened as a result of me getting all my credit cards stolen in Barcelona. Even though there was something totally liberating about only having cash, by the time I got to Lisbon, my last stop, I only had about €6 a day at my disposal. Seriously.

Thankfully I had my accommodation taken care of and was able to get the deposit I put down back in cash on the last day, but I still spent 4 out of 5 days wondering WWNMD (what would Nomadic Matt do)? At first it kinda sucked being broke, then it was kinda awesome since it forced me to get more creative with what little money I had. In the end it was ALL sexy though because that’s just how we roll around here and now I have some budget recommendations to share with you.

Rent an apartment in a cool neighborhood

Assuming you are with a group of other poor but sexy individuals trying to find accommodation in Lisbon, I highly recommend all going in on a well-situated apartment rather than a hostel or -2 star pension. There are some pretty sexy apartments in Lisbon that can be rented for as low as $50 a night (divide that by 3 or 4=bargain), and by having your own kitchen, you are able to save a ton on food.

Lisbon is awesome in that it’s one of those cities where the city itself is an attraction and just hanging in some of its neighborhoods is a unique experience. I was blessed with a sweet place in Alfama. Chiado and Baixa are two other hoods I heard can be pretty cool places to stay.

Spend a day getting off and on Tram 28

Another perk of staying in Alfama was my close proximity to Lisbon’s most famous tourist attraction: Tram 28. If you’re looking for a good introduction to the city, this is it. It winds around almost 10 kilometers and passes through some of Lisbon’s most photogenic and happening neighborhoods: Graça, Mouraria, Alfama, Baixa, Chiado, Madragoa and Bairro Alto. Since it is hop on/hop off ,you can easily spend a day just doing that if you buy a Viva Viagem travel card as opposed to paying for a single-journey. One costs around €5 for a 24 hour period and gives you unlimited access to the metro, trams, buses and elevadores.

Now that we’ve established purchasing a Viva Viagem card is a good investment for any broke ass visiting Lisbon (or anyone visiting Lisbon, for that matter), let’s talk about another sexy thing that you can do with it: ride the elevadores.

There are plenty of other cities in the world that claim to have been built on seven hills, but not sure any of them aside from Lisbon have incorporated elevators as a part of their public transportation network. I mean, elevators in a city of hills totally makes sense, right? It’s also totally sexy since most of them offer pretty sweet views once you finally make it up. Elevador de Santa Justa is my personal favorite.

Going to Belém is another cool thing that you can do with your travel card. It’s about a 10-15 minute ride on either Tram 15 or 127 from Praça da Figueira or Praça do Comércio. There is a monastery out there and one of the sexiest towers I’ve ever seen – Torre de Belém. If you’d like to go inside either, don’t go on a Monday as they are both closed.

While you are out there, you should also hit up Antiga Confeitaria for a couple of Pastéis de Nata since Belém is where they were born several hundred years ago (hence why they are also called Pastéis de Belém). The confeitaria gets slammed with tourists, but just deal with it – their cappuccinos are sexy and Pastéis de Nata delicious.

Grab a glass of wine at a miradouro

What is sexier than a glass of wine with a view? Not much which is why you should definitely utilize the plethora of amazing viewpoints Lisbon has to offer. My favorite is Miradouro da Graça. There’s a small café there where you can get a glass of wine for like €2.

Take a sunset sail over to Cacilhas

Sunsets are sexy and always free so it’s a good idea to enjoy them as much as possible when you are broke. As you can imagine, I saw a lot of sunsets while I was in Lisbon this last time, but my favorite by far was the one I witnessed while crossing the Tagus to Cacilhas.

Every 15 minutes ferries leave from Cais do Sodré for the sleepy neighborhood of Cacilhas. For less than €3 roundtrip, you can see a side of Lisbon that I think a vast majority of tourists miss and I am not just talking about the gorgeous view. Fishermen outnumber foreigners here for the most part so you bet it’s where you can find some of the best seafood in town.

One of the sexiest restaurants I’ve ever eaten at is towards the end of the promenade and called Atira-te ao Rio. You should definitely go if you come up on some extra money to spend like I did on my last night. It’s more than reasonably priced for having one of the best panoramas of Lisbon and how often can one say they’ve dined al fresco at a randomly placed table on a pier?? SEXY.

A little far fetched, but it’s entirely possible that someone will be having a sweet party at a sexy mansion somewhere in Lisbon while you are there. If you are lucky to hear of one or even luckier to be personally invited to one, you need to make sure you go.

Party in Cais do Sodré

Nightlife in Lisbon is off the chain and you can always find something sexy going on which is why if all else fails, just drink a bottle of rosé and head to the bars.

Another reason I grew fond of this neighborhood is because it was once the shadiest part of town, the red light district. Its close proximity to the port made it a hotspot for drug dealers and ladies of the night which is why there are so many awesome dive bars there named after famous ports around the world.

They’ve done a great job cleaning the place up over the past couple of years, but you can still find the occasional aging “lady” wandering and wondering where have all the sailors gone (cue Paula Cole). I saw a couple of them with my own eyes one afternoon and instantly felt sexier about myself so no complaints here..