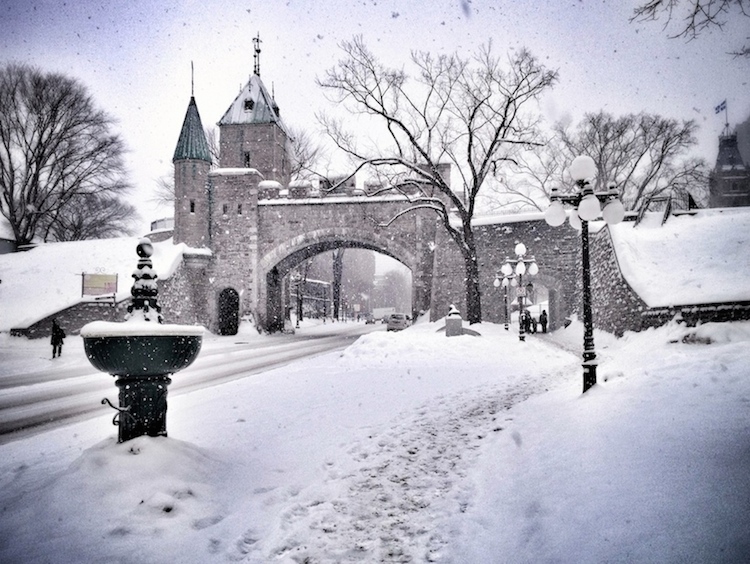 Taking a quick trip to Canada this past February was not as random as it seemed. Although it wasn’t planned that far in advance and Canada probably isn’t a place you’d expect to see written about much on this European-focused blog, I had been dying to explore one city there in particular for years now: Quebec City.

Founded in 1608 by settlers from France and still holding on strong to many of the same French traditions some 400 years later (even while under British rule for almost 1/4 of that time), I had always heard that hanging in Quebec felt much more like hanging in Western Europe than Canada. Some would even say it’s “the most European city in North America“. But was that the case?

That’s what I, Master of Europe and devoted Europhile, set out to investigate for myself – and this is what I found.

If you thought Lapland was the only place you could get your reindeer herding on, you’d be right. It appears to exist in some of the northern parts of Canada, but from what I can tell, completely commercial and not open to tourists. Dog sledding, ice fishing, snowmobiling, backcountry skiing, snowshoeing, northern lights, frozen waterfalls, and ice hotels on the other hand? Quebec’s got you covered.

Perhaps its most popular winter attraction, Hotel de Glace is the only hotel made completely out of snow and ice in North America that’s still in operation (another one popped up in Montreal for a bit, but closed its doors last year). You will find Hotel de Glace on any given list of the world’s coolest ice hotels while the rest are mostly found in Europe. Finland, Norway, Sweden, Romania, Switzerland, Slovenia…and then there is ALWAYS Quebec.

Another winter wonder, Chute Montmorency (Montmorency Falls), is only 12 kilometers from the center of Quebec and actually 98 feet taller than that attention whore Niagara Falls. Sure it’s only 1/50 the width, but that means it’s easier to freeze over during the colder months making it an excellent spot for ice climbing. And hey, guess what? Ice climbing originated in Europe. More specifically, in the Alps.

Carnival celebrations take place worldwide around the month of February, from India to Italy, so Quebec’s famous winter carnival is nothing really unique in those regards (though it is important to note most carnivals happen in Europe or in other countries outside of Europe that at one time or another were under European settlement/colonization/occupation). What is unique about Carnival de Québec though is that it’s the largest celebration of winter in the world. I mean, how many places can you see this happening on a freezing cold Saturday in February?

Another thing that makes it special? Caribou. Quebec’s dangerously delicious drinking delicacy that goes down smoother than a baby’s bum and really packs a punch when drunk in large quantities, which it is.

You can find this port + whiskey/brandy + maple syrup beverage being sold on just about every corner throughout the carnival. Hot or cold, I think the greatest part about it is how fashionably portable it’s become over the years. What am I talking about? Allow Backpacker Becki to demonstrate below…

What we have here is not just a random photo with some random dudes holding some random sticks adorned with Bonhomme, the jolly ambassador of the Winter Carnival. Those are magic sticks (actually “canes”) that can hold probably a half a liter of Caribou as well as help with your balance towards the end of the night once your supply runs out. Très européenne, oui? And also brilliant.

Vieux-Québec, or Old Quebec, sits within the only preserved fortifications in North America outside of Mexico giving it a cool Medieval vibe that you’d be hard-pressed to find anywhere else except in Europe. Just strolling around its cobblestone streets and checking out the architecture was one of the things I enjoyed doing most while there, especially on the days it started to snow because Quebec covered in white = a magical sight.

One of my favorite buildings to look at was this old thing, Château Frontenac (below), now a Fairmont hotel but originally built by the Canadian Pacific Railway company in the late 19th Century as a part of a luxury tourism project. Bruce Price was the architect and you can find a few of his other “châteauesque” buildings throughout Canada (like in Banff and Montreal), but Château Frontenac truly takes the cake – snow or shine.

A society so French, it hurts

And when I say hurts, I mostly mean can’t be subdued. This was perhaps my most important finding because at the end of the day, whether or not it looked European didn’t matter to me as much as whether it felt European – and it absolutely did. From the moment I landed I was inundated with Frenchness in the form of street names, food, language barriers and throwbacks to my travels through France in 2012. Look familiar?

Since you’ve obviously read every post that I’ve ever written on this blog, of course it looks familiar! It’s one of those CitéCréation wall murals that I first found in Angoulême and then Lyon. There are only 12 in North America – one in Mexico and eleven in the province of Quebec, six of which are in and around Quebec City.  Similar to the Fresco for the People of Lyon, this one is a Fresco for the People of Quebec and depicts some of the characters who played an important role throughout the city’s history. Like Samuel de Champlain, front and center in the green velour getup.

So, my final thoughts on my Euro investigation of Quebec are this: if you love Europe and are looking for a special place to visit in North America, this is an excellent city to spend some time in. It’s living history and you are sure to have some moments of disbelief when you think about the fact that you are only 3 hours from the U.S. border. Even if you don’t care about the European flair, Quebec is undeniably one of the prettiest cities on the continent and one of the best places in the world to experience winter because there they truly celebrate it, not hide from it.

Whether or not it is the most European city on the continent will always be up for debate, but in my humble opinion? Oui. It is.

Until we meet again, ma chérie!

This trip was made possible and enjoyable by all the lovely ladies and gents from Tourisme Québec and Carnival de Quebec – merci! I’d also like to take this opportunity to thank Richard Grenier who reached out and sent me this gold “lucky traveller ring” after he saw his shop, Le Forgeron d’Or, in one of my photos on Facebook. I love it and I’m sure it’ll bring me back to Quebec someday :)

Meet Montenegro - Darling of the Balkans