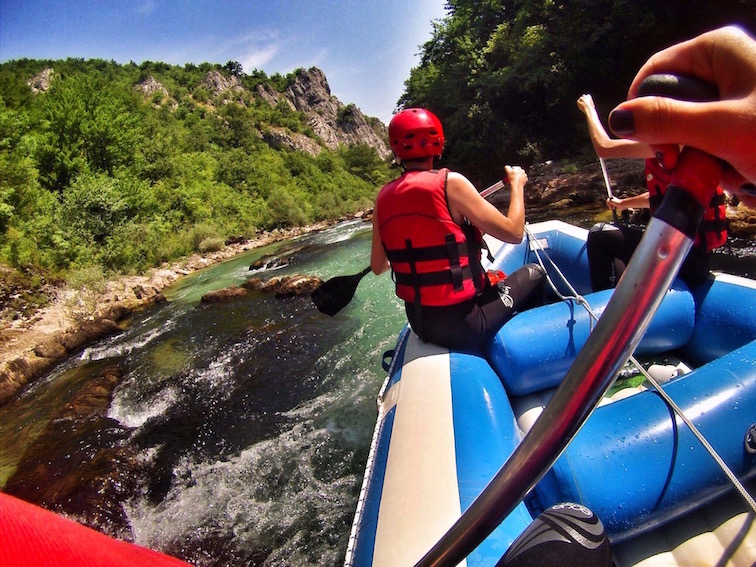 Konjic is a small town in Bosnia & Herzegovina that I had probably passed by without looking twice at least a dozen times in my life driving between Sarajevo and Mostar. I had heard rumors of some secret Yugoslav bunker hidden somewhere there, but aside from that, not much else so Jablanica was always my go-to halfway stop with its amazing lamb restaurants or I just kept trucking through. This past July, however, Konjic was one of the first places I headed for what I guess is becoming my annual “Via Dinarica adventure”.

After an overnight near Boračko Lake at Villa Sunce (super cute family-run establishment, by the way), we were picked up in the morning and taken to the center for a quick look and some rafting on the Neretva River which cuts through. Safe to say my [Bosnia] life hasn’t been the same ever since.

Konjic is one of the loveliest towns I’ve seen in Bosnia & Herzegovina and regardless if you are into nature or culture, it’s a stop that will certainly please anyone. Apparently it is the oldest permanent settlement in the country, dating back 4,000 years, and as well has the best preserved Ottoman bridge around which I don’t know how the hell I missed before. Could have everything to do with the food coma I’m usually in (or anticipating to be in) when driving through.

The Neretva is without a doubt one of the most important rivers in the Balkans running from the base of Zelengora in Sutjeska National Park to the Adriatic Sea. It is a straight up source of life for the entire eastern part of the Adriatic basin and the largest karst river around this part of the Dinaric Alps. If you’re familiar with karst rivers, then I’m sure you can imagine how incredibly beautiful the scenery gets along the way – or if you’ve driven from Sarajevo to Mostar, then you know. Just wait until you get all up on it with a raft though.

Having done river rafting only once before in my life (also in Bosnia near Bihac along the Una which borders Croatia), I was a bit worried that my lack of experience might hold our crew up – or that I might die – but our ringleader Eldin Gakic from Tudup Raft immediately set my mind at ease. There’s something about having a representative from Konjic’s Water Search and Rescue Team as your guide that I believe would set anyone’s mind at ease…

The whole affair turned out to be incredibly pleasant with the perfect combination of relaxation and physical activity. We rafted some, we swam some, we climbed some, we selfied some, we played with rocks some. On a hot summer day, there was really no better place to be and I couldn’t help thinking how crazy close this whole experience was happening to the two most visited cities in Bosnia & Herzegovina – Sarajevo and Mostar – both of which are less than an hour away.

Turns out those rumors of a secret bunker were true and what were the chances that El Capitan of our raft not only had a bit of personal history with it to share, but familial connections to get us down there the next day when it was otherwise closed to the public.  Maybe one in 3.8 million (the approximate population of BiH)?

And speaking of billions, $4,600,000,000 is estimated to be how much Tito spent building this compound that has more or less been useless since it was completed. The project began in 1953 and was finished just one year before his death in 1979. The 6,500 square meter horseshoe-shaped bunker built 280 meters under a mountain, also known as ARK D-0, was ordered in the event of a nuclear attack and had the capacity to accommodate around 350 people for up to six months. It contained two fully stocked kitchens, dorm rooms, bathrooms, conference rooms, communication rooms, offices and of course, a private wing for Tito where you can be sure I took the opportunity to take care of business in the form of fake phone calls to world leaders from his personal desk. It’s tradition.

These days its only capacity is housing the occasional creepy art exhibit and welcoming creepy tourists like me who are somehow fascinated with obscure and often macabre, leftover pieces of history. If you can believe it, less than 20 people knew about this monstrosity’s existence by 1979 (plus those working on building it, I suppose?) and it remained a big, fat military secret until the beginning of the 20th Century.  For example, while Eldin’s father knew about it everyday he went to work for 15 years, Eldin and most of Bosnia didn’t learn about it until after 2002.

When I was there last summer the bunker had designated visiting hours every Monday, Wednesday and Friday, but currently if you want an invitation down there you need to book through a tour company like Eldin’s at least a day before or try to tag along with another group that is already going. Definitely worth a look if this sort of tourism attraction is of interest to you, and even if it’s not, you can see there are plenty of other things to do around there to keep you busy. Another Balkan beauty, Konjic had way more to offer than I imagined and for sure a stop to add on everyone’s Bosnia & Herzegovina itinerary.

The Via Dinarica project has been made possible by the generous support of USAID and UNDP BiH, implemented by Terra Dinarica.