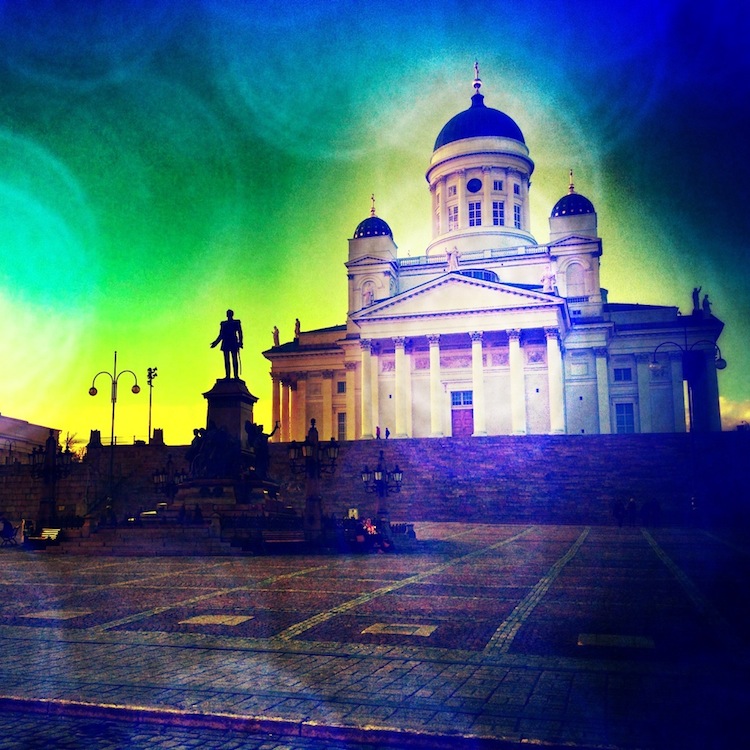 Helsinki is one capital I didn’t think I’d return to or ever consider as one of my favorites in Europe given my limited first experience with it, but after spending a little more time there on my Blonde Gypsy Finland trip, it’s safe to say I was completely wrong.

While it may not be as instantly beautiful as some of the neighboring Nordic and Baltic capitals like Copenhagen, Stockholm, Tallinn or Riga, there is a real creative and forward-thinking vibe to it that I haven’t felt in many other cities before.

Helsinki is down to experiment big time with things like food, fashion, design, architecture, and technology that most other capitals are either too scared or too set in their ways to, and I find that much more appealing. Even if something doesn’t always pan out to be a success, their persistence to keep trying new things and raising the bar for themselves is admirable. To put it bluntly, Helsinki has balls.

Here are six things in Helsinki that I loved the second time around and don’t think you should miss, but might due to bad timing or simply because you had no idea.

1) Its hodgepodge of architecture

Helsinki’s architecture is one of the biggest quirks of the capital in my opinion and easy to overlook at first glance. It’s a crazy mix of of Modern, Neoclassical, Jugend/Art Nouveau, Byzantine-Russian and Vernacular architecture all up in your face at once so perhaps it’s not a matter of overlooking it as much as being subconsciously overwhelmed.  Paying attention to Helsinki’s architecture is in many ways like paying attention to it’s history and personality though, so seriously, take a closer look.

2) A fashion brunch at Klaus K

I love fashion and I love brunch so when I heard there was a “fashion brunch” at Klaus K, Helsinki’s first design hotel, I had to investigate.

These special brunches take place only about five times each fall and spring on the upper-level of the hotel’s stylish LIVINGROOM which they describe as not a restaurant or a bar, but “an environment where guests (especially including non-hotel guests) can be themselves”. I was myself alright, all over their delectable appetizer buffet and champagne selection.

The fashion show was lovely and actually had two intermissions in the form of a magic act and musical performance. I was really lucky to be in town not only on the last weekend of the season, but also when Jukka Rintala, the “Karl Lagerfeld of Finland”, was there showing his collection.

I’ve been to a lot of nice brunches in my life and I can honestly this one might take the cake in terms of value for your money (€38). It’s definitely not the cheapest I’ve ever had, but it’s also not just a brunch – it’s an event that lasted over three hours and was a great way to take in some Finnish fashion while enjoying copious amounts of delicious food in a well-known Helsinki hot spot.

The food culture of Finland is quite interesting and has been making great strides in the past few years, especially in Helsinki, regardless of the fact that most people outside of the country know little to nothing about it. I mean, when’s the last time you walked by a Finnish restaurant?

Even though you probably couldn’t identify one of their national dishes or delicacies in a line-up if your life depended on it, you may have heard about Restaurant Day which actually originated in Helsinki in 2011 and has been spreading around the world like wildfire. This concept of opening up your own pop-up restaurant wherever you want – in your home, on a street corner, up in a tree, etc – and serving whatever you want, be it deep fried bubble gum, Kobe beef hot dogs, or caviar ice cream sundaes (because that’s what I would serve), is perhaps the best example of all in understanding the lengths Finns are going to experiment with food.

If you aren’t in town on one of the four days out of the year that Restaurant Day takes place, another way to explore Helsinki’s growing food scene is on a guided tour with Food Sightseeing Helsinki (€55). It’s basically a three hour introduction that includes visits to 5 establishments with 7 different tastings and gives you a pretty well-rounded view of what’s happening right now and what’s been happening for years.

I’m not sure how I didn’t notice this before, but there are a ton of karaoke bars in Helsinki which is surprising given the Finns’ reputation for being so “reserved”. Pop into one and I promise you’re also going to think this stereotype to be just plain silly. One of the most popular in the city is Restroom which, yes, was also once a public restroom. What is it with Finns and wanting to party in potties? I kind of love it.

5)  The beaches and hills of Suomenlinna

Sure, Suomenlinna is one of the most visited attractions in Helsinki, but it’s so much more than just a former maritime fortress with military museums and canons lying around. It’s a wonderful little island perfect for strolling around or picnicking, and if the weather is warm enough, even swimming, so keep that in mind when scheduling it into your day. Stupidly, I thought an hour would be more than enough time to see it so I was forced to leave way before I wanted to, but now I know and so do you.

6) Celebrating Vappu aka May Day

Ain’t no party [in Helsinki] like a Vappu party, so if want to see the city the most alive it gets all year, you should definitely visit around May 1st. It’s a national holiday honoring workers and celebrated around the rest of the country, but the best and biggest party of all happens right in the capital.

Although this holiday is meant to celebrate workers, these days it has pretty much been taken over by students in white hats and candy-colored Ghostbuster jumpsuits celebrating their last days of school and the arrival of spring (assuming it arrived). The partying actually starts on Vappu eve, April 30th, when everyone gathers in Market Square to watch the crowning of Havis Amanda around 6pm. From that point forward, anything goes until May 2nd. Anything.

All roads and parties eventually lead to Kaivopuisto or Kaisaniemenpuisto on May 1st for picnics and if you’re game, more champagne. Such a perfect way to end a nineteen day trip in Finland and in my opinion, the biggest thing that’s not to be missed.

Have you been to Helsinki? What did I miss putting on this list that I shouldn’t have? Kiitos to Visit Helsinki, Klaus K, and Food Sightseeing Helsinki, and Radisson Blu Plaza Hotel for making my visit and some of these activities possible. As always, all opinions stated here are my own.

Songs to Rock While Traveling the World - Volume 1