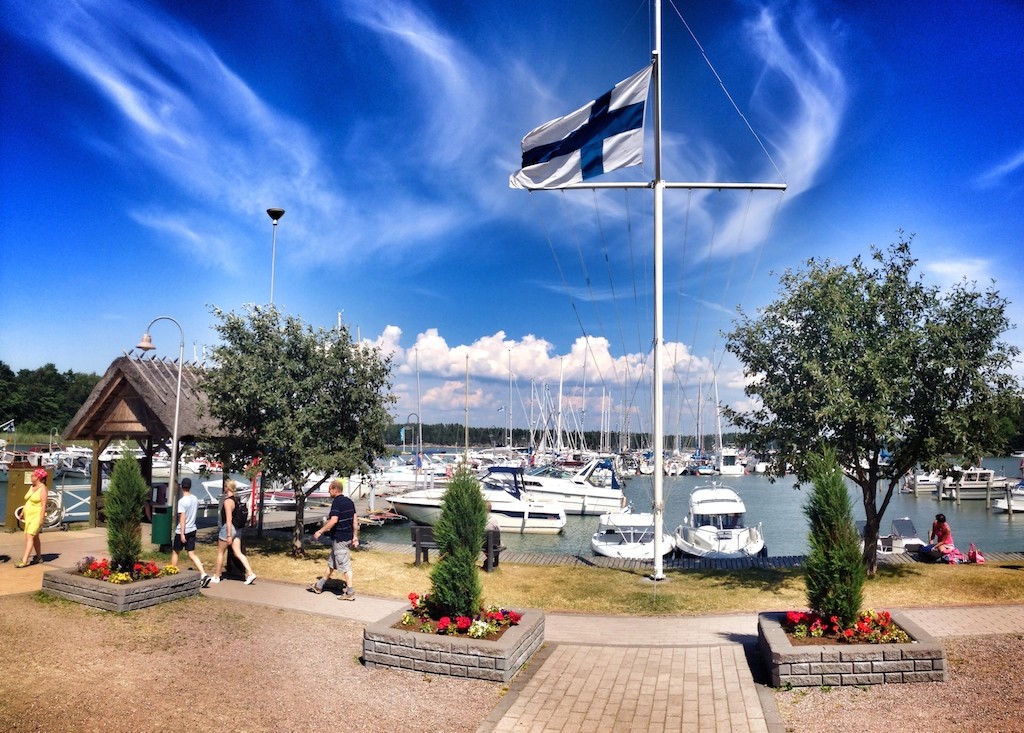 Nokia, Santa Claus, Angry Birds, goth metal bands, and saunas are just a few things that probably come to mind when you think of Finland…but summer?

Last grand tour I did through Finland, summer was all but a distant thought in my mind as I traveled from its northernmost town of Nuorgam to the capital Helsinki in the south during late April while half of the country was still frozen and the other half, well, also pretty “chill” in all of the ways you can think of.

Still, I kept hearing over and over that I just must come back during summer with tales of Finnish island life and the existence of the “sunniest place in Northern Europe” just off its west coast. The largest archipelago in the world just a stones throw from where I was hanging in Turku with thousands of wild rocks, skerries, and islets there for the taking so long as one was down with utilizing ferries, boats and/or kayaks to reach them.

Naturally I was intrigued by these offerings, particularly considering it’s a lesser internationally touristed territory, and thanks to a chance invitation last summer to attend Finland’s largest music festival, I took it as a sign that it was time. But where to start?

I’ve posted this map above before as I think it’s a good representation of just how massive Turku/Finland’s archipelago is (can you imagine this isn’t even half of it?) and how many choices one has when they decide LET’S EXPLORE. With that, I put my limited knowledge and very limited amount of time in the hands of some expert tourism board friends and this is how it panned out.

So basically from Turku begins what is called the Archipelago Trail/Archipelago Ring Road. Essentially a 250 kilometer path for rugged cyclists or for those traveling by car or on a time constraint, a loosely mapped out guide for the best points of interest. By car, you can check it all out in one day via 12 bridges and 9 ferries (many of which are free, I might add), or if you just want a taste like I did, you can pick one of the major towns like Nagu/Nauvo (Swedish and Finnish name, respectively) and spend a bit more time.

Along with Pargas/Parainen, Nagu is one of the most popular tourist stops on the trail because aside from being extremely accessible by road and public transportation (1 1/4 hours by bus from Turku), it also has a lovely little waterfront situation with a quaint marina, sandy beach, some great restaurants, and just more services for travelers in general. Not far from there is also the super cute Nagu Church with a unique interior featuring dangling ships – proof of just how important sailing has been in these parts throughout history – as well as Finland’s oldest bible.

For the only night that I had to spend there, I was set up at Martha’s Inn – an adorable family run establishment – where I not only got to feel what it was like was sleeping in a dollhouse for the night, but also was able to get my sauna on which I had been waiting for since I touched down on Finnish soil.

Before it was time to head off deeper into the Turku Archipelago and onwards to the Åland Islands, there was one more thing that I had to try and that was KAYAK. It’s one of the most popular activities on Nagu, but truth be told, I was way hesitant given my poor coordination skills – and also this.

Sometimes it’s better to not inform your family/friends of your impending travel plans, but I digress. In the end, I not only conquered my fear of kayaking and did not end up like poor Max up there, but came away from the experience LOVING it. We did a short little paddle over to the nearby island of Skillingholm (not 100% sure if that is actually how you spell it – just know it was pronounced “chillingholm” which was more than fitting) and then back to the harbor. Just enough action before I started to settle into the slower pace of archipelago life.

After leaving Nagu and taking a gorgeous drive then short ferry west towards Korpo to the port of Galtby, I hopped on another ferry headed for the island of Kökar and this is where things started getting interesting. Or maybe confusing for some, but I’ll try my best to explain.

If you didn’t catch it in the photo above, while technically still in Finland, a Finnish flag was nowhere to be found on my ferry, but rather one of Åland – the autonomous conglomeration of islands we were floating towards which has its own parliament, postal stamps, duty-free tax laws, and only one official language. Swedish.

You see in Finland, there are two official languages and several minority ones with over 90% of the population Finnish-speaking and around 5% of the population Swedish-speaking. In Åland those percentages are reversed and as someone who has lived in Sweden before, you might as well consider yourself there and not still in Finland. This was immediately clear when I arrived to my hotel Brudhäll – another family-run operation and the only hotel on Kökar – and had to bust out my Svenska to properly check in and make a dinner reservation.

Anyhow, this is all linguistically speaking and while I am well aware Åland has its own culture that is unique to both Finland and Sweden, for a visitor just chilling there mostly by their lonesome without much interaction with locals, I felt like I was in Swedland (unexplainable mix of both).

There is nothing much to do on Kökar at all except wander or bike around the island which at the time was 110% the perfect situation for me. As previously noted, had taken this trip after two months of straight traveling and one music festival, so being “stuck” in the smallest of small towns where everything closed no later than 8pm and asking for wifi kind of felt like asking if I could stand on a table in the middle of your cafe and smoke crack – there was no other place in the world I would have rather been.

While there wasn’t much to do on Kökar and in general not that much to do in any small Finnish island town, the magic of the archipelago is truly the uninhabited bits or in the case of Källskär, a once inhabited/sometimes still inhabited bit. Small excursion boats go from Kökar daily June through August (roughly) and upon your arrival you can immediately tell this place is something special…

The rock formations here, Källskärskannan, created during the ice age are other-worldly and strangely calming in the midst of the wild Archipelago Sea. No wonder Baron Göran Åkerhielm (aka “The Count”) from Sweden decided to build his own personal retreat here back in the 1960s complete with a harbor constructed out of natural stones, several houses, a garden full of roses and Rhododendrons, and the odd classical statue randomly placed which all make for quite a striking contrast.

Last but not least was a visit to Mariehamn, capital of Åland on Fasta Åland, and where I would be departing by ferry to Stockholm. If you’ve ever taken an overnight ferry between Stockholm and Helsinki or Tallinn,  you’ve stopped in Mariehamn before in the wee hours whether you noticed or not.

Being that it’s located on the largest island in the archipelago and is the capital, Mariehamn definitely has a lot more going on than any of the other places I had visited since I left Turku. Still though, there was something so relaxing and idyllic about this town that me feel miles away from civilization in the best possible way.

Sadly and as usual, I didn’t have as much time as I would have wanted to spend exploring more of it and checking out some of the museums, but my time there turned out to be really special thanks to lovely Annica from the tourism board and her equally lovely friend Jana who took it upon themselves to show me how the locals do.

After an amazing seafood dinner, Jana took us out on her boat for a sunset cruise – because you gotta have a boat if you’re living here. First was a short trip around the bay and then on to show me their “hoods” on the other side of Mariehamn’s little peninsula. Pretty gorgeous hoods, if you ask me.

My last morning in the islands was spent strolling around Mariehamn’s cozy center and feeling whatever Russian-ness I could find. The town was actually founded in 1861 when these parts were under Russian rule, hence “Marie”-hamn…named after Czar Alexander II’s wife. I didn’t really find much though I can say the way it was structured with leafy promenades and broad avenues was reminiscent of some towns I’ve visited in Russia. Rounded it all off of course with a traditional Åland pancake at Bagarstugan and I was on my merry, ferry way…

If there is one word I can use to sum up my time spent in Finland’s archipelago, it would be peace. Sure, I may have left the islands with zero tan lines nor any wild beach parties to speak of…but I left feeling miraculously refreshed and ready to get back to the grind which is what summer holidays are often meant for, aren’t they?

KIITOS to Turku Touring and Visit Åland for the invitation to finally feel some Finnish summer vibes. Any other unconventional summer holiday spots in Europe you can recommend?

A Beginner's Guide to the Dalmatian Coast