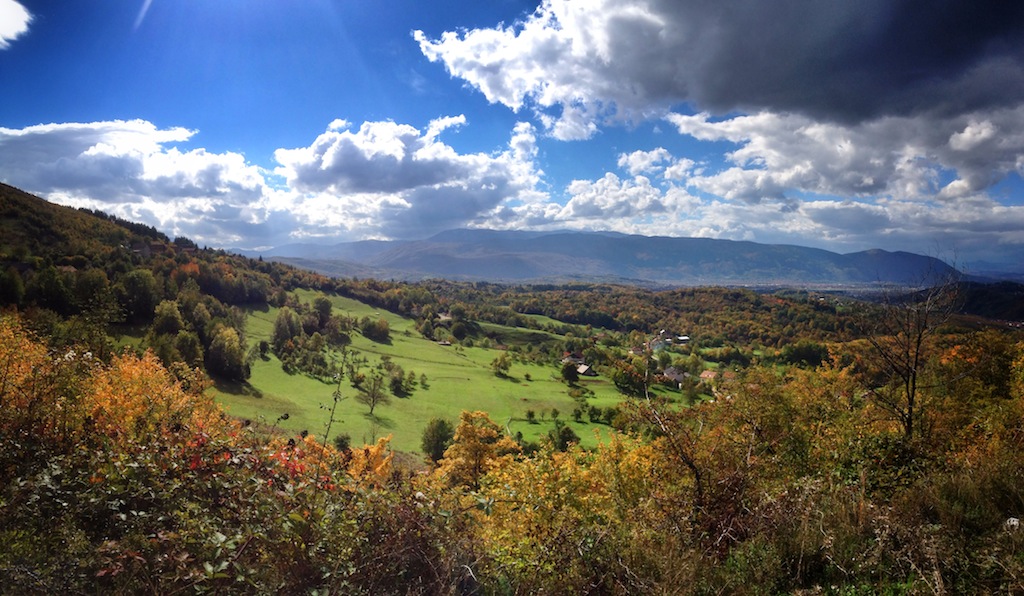 6 Things You Shouldn’t Miss (But Might) in Sarajevo, Bosnia & Herzegovina

Falling in love with Sarajevo was pretty much instant for me. Before I could even see it in the daylight or really knew anything about it, there was just something that I was immediately attracted to which to this day I still can’t fully explain. Then again, that’s true love for you.

I’ve already put out there why you shouldn’t miss Sarajevo on your next trip to Europe based on my first visit, but now after my second, third, and fourth trip, it’s time to share some things I don’t think you should miss once you finally get there.

Golden fishy (address: Kaptol 5) has to be one of my favorite cafe/bars in the world and I think once you set foot in the place you will understand why. It’s fabulously kitschy and cozy – like your elegant, hoarder Grandmother’s living room on crack. Would take days, maybe weeks, to fully inspect all the random “stuff” hanging, sitting, and floating around in that place. Add some of their delicious rakija into the mix and it could even take years.

While we are on the topic of rakija and international cocktails, Kino Bosna (address: Alipašina 19) is a bar you should know about. Actually it’s just an old movie theater that was turned into an establishment that serves alcoholic beverages and kids get wild, but nevertheless… It’s not on any of the main bar drags and a tad nondescript from the outside which is why it’s easily missable.

Though kind of a dive and if you’re over 25 you might be the oldest person in there, the drinks are the cheapest I’ve seen in Sarajevo and it’s full of interesting characters who may or may not serenade you with some Mariah Carey, Guns n’ Roses and Freddie Mercury if the mood is right. Basically it’s a place to at least try if you like the nightlife, to boogie, and not spend a fortune on it. Then move on.

You can get cevapcici/cevapi all around the Balkans, but cevapi in Sarajevo is pretty much a legend. There are cevabdzinicas on every corner it seems, but there is one – actually 2 – that stand out above all the rest in my mind and that is Zeljo 1 and Zeljo 2 (named after a local football club). So nice they serve it twice and just diagonal from each other on Kundurdiluk in the center of Bascarsija.

For less than $7 you can get a pretty bomb meal that includes 5-10 cevapi (mixed beef and lamb sausages) with onions in somun bread and a glass of kiselo mlijeko (sour milk). Make sure you ask for it with kaymak (creamy cheese deliciousness). You won’t regret it unless you are vegan or lactose intolerant, and your taste buds will thank you.

*Cigarette at the end is totally optional, but will definitely earn you some invisible high fives from the older gen who remember a time when they were actually included in the price of a meal.

Baščaršija (Sarajevo’s old bazaar) and Stari Grad is a rare exception of an “old town” that has maintained its authenticity even though it is the city’s most popular tourist attraction. Sure you can still find some tacky souvenir shops and overpriced bars and restaurants here and there, but for the most part it has kept it real and stayed relatively cheap which you can feel on any given day walking through its stone streets. It’s a place for locals just as much as tourists which is becoming increasingly hard to find in Europe.

Old dudes sitting around for hours drinking čaj/kafa or playing monster chess in the main square near the Orthodox church, locals and tourists eating a feast of cevapcici elbow-to-elbow for less than the price of a Diet Coke in Paris, the cool kids smoking hookah and drinking Bosnian coffee like it’s going out of style with the sounds of ezan in the background. It’s easy to overlook just how pure it all is if you’re not paying attention or have your nose in a guidebook so just sit back, relax and soak it all in because this is one of the things that makes Sarajevo such a unique European capital.

If you’re headed to Sarajevo and were unaware that from 1992-1995 it was under the longest siege of a city in the history of modern warfare, it won’t take you long to notice. Bullet holes and mortar damage still stain a large percentage of the city’s buildings and sidewalks which is impossible to ignore and inevitably makes you feel a little bummed.

Instead of focusing your attention on the grimmer legacies from the war though, you should make it a point to visit one of the more encouraging: the Tunnel of Hope – the ~800 meter passageway that was secretly dug to provide a means to transport people, food, war supplies and humanitarian aid from Bosnian held territory on the other side of the airport to and from the city. For now only about 20 meters of it remains open, but hopefully someday they will get around to reconstructing it completely.

Though small and not the easiest to get to using public transport (your own car or taxi is better, costs about 20 KM from the city center), the Tunnel Museum is a great place to pay respect to the resilience of Sarajevo and see firsthand one of the main reasons it survived being cut off from the rest of the world for nearly three and a half years.

6)  Its hills and mountains

If you only have time to do one thing on this list, let it be this one: get out and see the hills and nearby mountains.

If you are brave enough to drive around Bosnia with your own car, that’s awesome. Just take a cruise one day and preferably with some sort of GPS system, but don’t stray from the roads because unfortunately land mines are still a reality. If you don’t have your own car, there are paths from the center that you don’t have to walk up far to get some pretty gorgeous views. Trebević is probably the easiest to get to and where you can also find the abandoned bobsled and luge track from the 1984 Olympics.

To have a real mountain experience, it’s probably best to find a guide or tour company to take you on some kind of a day trip to a place like Lukomir on Bjelasnica Mountain or Sutjeska National Park.

Though getting out of town for a bit may require the most effort if you are there without a car and limited on time, believe me, it’s worth it and such an important part of what makes Sarajevo Sarajevo.

Have you been to Sarajevo? What did I miss putting on this list that I shouldn’t have?